Would a Jewish Museum in Vilnius Graywash the Lithuanian Holocaust?

Posted on 7 July 2013 by Defending History 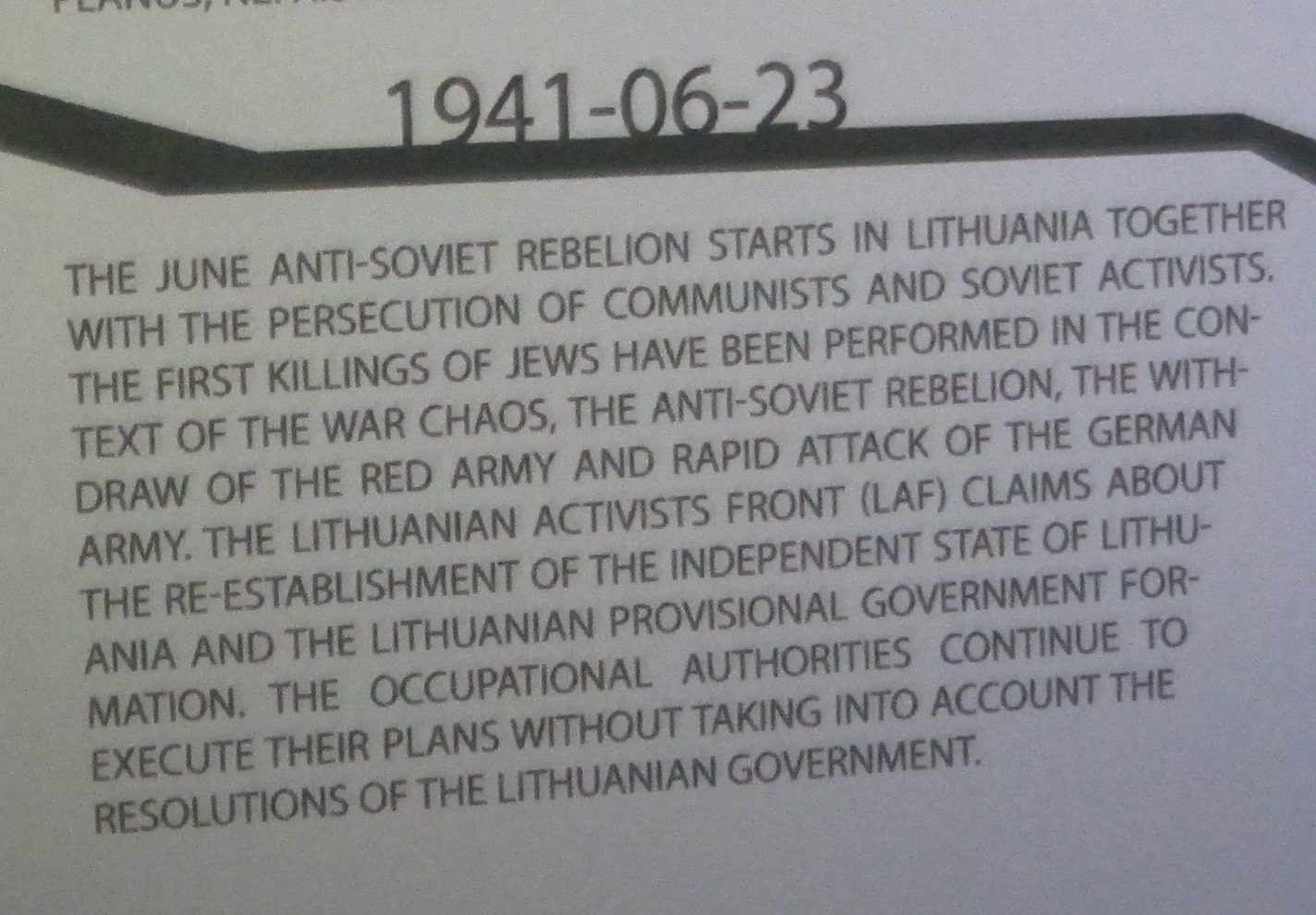 A recent visit to Vilnius’s “Jewish Museum — Tolerance Center” has revealed a shocking panel purporting to convey the “facts” of June 23rd 1941, the darkest date in Lithuanian Jewish history. It is the date on which the Holocaust in Lithuania began. No need, incidentally, to take our word for it. Ask any Lithuanian Jew, of any generation, current abode or political persuasion: When did the Holocaust in your country start?

The Nazis were on the way, having launched war on the USSR a day before, and fascist, pro-Nazi Lithuanian nationalists, many affiliated with the LAF (Lithuanian Activist Front) and donning white armbands, started butchering Jewish neighbors, including aged rabbis, children and women, in dozens of locations starting on the 23rd of June and extending to the variable number of days before German forces arrived and established control at any given location. Plunder, rape, humiliation, taunts of imminent genocide, and beatings were widespread. The history is crystal clear from the works of historians and survivors’ memoirs and interviews.

It is the onset of the genocide of Lithuanian Jewry that was to continue uninterruptedly until its completion, ultimately leaving around 96% of Lithuanian Jewry murdered, one of the highest, or the highest, percentage in all of Holocaust-era Europe (of countries with substantial Jewish populations), in direct consequence of the massive voluntary local collaboration and participation. (This history means that the real Lithuanian heroes of the era are those incredibly and inspirationally brave citizens who saved a neighbor from the LAF and other fascist killers in different groupings; they had to have more courage than in most other countries and were often seen as traitors to Lithuania in addition to betrayers of the occupying Nazi forces. Hopefully their families will live to see city-center streets and squares named for them.)

It is, sadly, almost expected in Vilnius, as in other Baltic capitals, that state-sponsored “genocide” institutions provide far-right pro-fascist manipulations of history to sanitize the local perpetrators of the Holocaust. In Vilnius these include the Genocide Center, the Genocide Museum, Tuskulėnai Park, and some activities of the “red-brown” commission.

But what is the point of a supposedly Jewish museum that reiterates the same ultranationalist propaganda? In fact, the accurate history is indeed provided in the separate, hard-to-find Green House elsewhere in Vilnius, at Pamėnkalnio 12, which is a real Jewish museum largely built by the hands of the last Lithuanian Holocaust survivors. Are there two separate histories meant to be split between two Jewish museums (both part of the same larger administrative state structure) in one city? If so, there’s a lot of fascinating sociology, psychology, urbanology and politics in the two buildings themselves: a beautifully restored historic building right on the street vs. a modest wooden green cabin on a hill up a driveway that is virtually invisible from the street.

The Jewish Museum —Tolerance Center building at Naugarduko 10 is the headquarters of the Vilna Gaon Jewish State Museum of Lithuania. The sign outside provides both names. Clearly the Gaon of Vilna would be turning in his grave at this gross abuse of his memory in his city Vilna, once known as the Jerusalem of Lithuania.

Apologists obfuscate the history, presenting a picture of semi-accidental killings in the context of “chaos,” of an “anti-Soviet rebellion,” ignoring the “little detail” that the Soviets were fleeing the Nazis’ Operation Barbarossa, the largest invasion in human history; they were not fleeing from the local Jew-shooters. Real rebels would have stood up against Soviet forces before the USSR’s sudden evacuation in face of Hitler’s invasion. The claim of an uprising establishing independence is moreover belied by further developments. The Nazi-puppet government was duly disbanded by the Nazis less than two months later.

Things are here pushed in the direction of the ultranationalist narrative about the Holocaust perpetrators really being anti-Soviet rebels out to get Communists. Shame about the crossfire.

But it is possible that the most outrageous distortion here, one often avoided even in some of the region’s far-right-bordering-on-the-antisemitic museums, is in the panel’s last sentence. Here there is an attempt to make kosher the Provisional Government of Lithuania by accusing the occupying Germans of not taking into account the “resolutions of the Lithuanian Government.” The fact is that the Nazi-puppet prime minister of that government, Juozas Ambrazevicius-Brazaitis, himself “signed the documents.” One of them orders Jews — in other words, the Lithuanian citizens of his own city, Kaunas, who were Jewish — to be transferred to a “concentration camp” (actually it was the gruesome Seventh Fort murder site). Another document orders the remaining Jewish citizens of his city to be transferred within four weeks to the ghetto being prepared.

In 2012, the Lithuanian government provided state funds for the repatriation of the remains of the Nazi puppet PM for reburial with full honors and a series of glittering events. Details are provided by Defending History, including links to the original documents of the Provisional Government, which is here whitewashed by the “Jewish [!] Museum — Tolerance Center” as somehow having passed good-faith “resolutions” for sparing the Jewish citizens of Lithuania. Quite the opposite is true.

An alternative explanation is that the word Jewish (like so often nowadays the PR-friendly ethnonym Litvak) is being hijacked in a state-sponsored museum, in a curious (though not unique) case of identity theft.

For Holocaust survivors and their families, and for all people of any background who deplore the Hitler legacy of genocide of European Jewry, there is hardly a more painful sight in the region than streets named for the 23rd of June 1941. One of them is alas in the capital, Vilnius.

Related: See also articles by Evaldas Balčiūnas, Milan Chersonski and Geoff Vasil;  the Collaborators Glorified section, and pages on shrines for collaborators, exotic tourism, and some translations of LAF leaflets predating the outbreak of war in 1941.