Posted on 21 November 2018 by Defending History

NEW YORK CITY—A New York Institute of Technology professor of physics, Prof. Bernard Fryshman, who is also one of the world’s major advocates for the preservation of endangered minority cemeteries (he helped the US Congress draft its 2014 resolution on the subject) has teamed up with Boruch Pines, a New York based descendant of many persons buried in the old Vilna Jewish cemetery at Piramónt in the Šnipiškės (Yiddish: Shnípeshok) district of modern Vilnius, capital of Lithuania. Together, they filed suit in the United States District Court for the District of Columbia on 8 November 2018. Defending History has obtained a copy of the summons and complaint, available as PDF, and below immediately following this report.

Their suit takes to task a little-known and allegedly corrupt taxpayer-funded agency of the United States government that exists to fight for the preservation of endangered cemeteries, particularly Jewish cemeteries in Holocaust area Eastern Europe. But for years, the US Commission for the Preservation of America’s Heritage Abroad (USCPAHA) has been collaborating with an allegedly corrupt group of London rabbis (the CPJCE) and greedy local Vilnius builders, politicians and corrupted state-sponsored community leaders to actually help provide cover for plans to desecrate the old Vilna cemetery (for huge profit, it is alleged), and it is argued, humiliate a half millennium of Jews in the city once known as the “Jerusalem of Lithuania,” via the siting of a new national convention center in a Soviet ruin in its center, to be expanded by a huge new annex. In other words, Lithuania’s new convention center would be a place where people clap, cheer, sing, dance and use bars and toilets surrounded by thousands of Jewish graves on all four sides. The Soviets pilfered all the stones, but ground radar has demonstrated the massive number of intact buried persons. In recent weeks, Lithuanian media reports on the new contracts being offered for the cemetery’s desecration did not even bother mentioning that the site is home to thousands of Vilna Jewish graves, including such major scholars as Rabbi Moses Rivkes (the Be’er Hagoylo, 1591-1671), Rabbi Abraham Dantzig (the Chayei Odom, 1748-1820) and Isaac the father of Chaim and Zelmale Volozhiner. The world’s leading specialist on the cemetery’s history, Prof. S. Leiman, has proposed its respectful restoration. which would become a huge, and honorable international tourist attraction for Lithuania.

Last summer, and again this month, the chairperson of the USCPAHA, Paul Packer, visited Vilnius, and offered the “official” (state-sponsored) “Jewish community” his blessings for the state plans, covering for acquiescence, it has been alleged, by his widely panned (successful) call for a  new “sign calling for quiet” to be erected at  the cemetery (he did not schedule any on-the-record meetings with any opponents of the convention center; in an off-the-record meeting last summer, he mocked the locals who have sacrificed a lot to stand up to the antisemitic establishment here by opposing plans for the “convention center in the Jewish cemetery”). This has been regarded by local Holocaust survivors and the religious Jewish community as a cynical slap in the face of the cemetery’s honor, one that brings solace to antisemites and nationalists who would never consider situating a convention center in the heart of a five hundred year old Christian cemetery. People are asking: Of what use is Mr. Packer’s sign when the whole area will soon become a national convention center and the approved center for the noise of untold thousands in the years ahead? 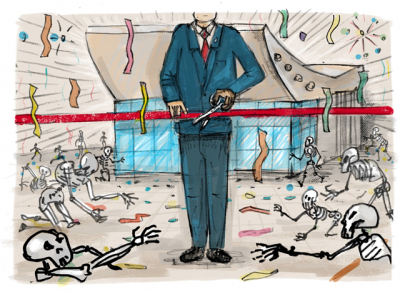 The alleged corruption of USCPAHA has been documented in recent years, and was the subject of New York Times coverage, and a severe rebuke from the United States Senate.

See Defending History’s chronicle of events as relating to the old Vilna Jewish cemetery at Piramónt. In the case at hand, USCPAHA commission members have in recent years been seen to collude with the allegedly corrupt group of “CPJCE” London rabbis accused of “selling other people’s graves” and their American affiliate known as “Admas Kodesh” (whose leader has tweeted untoward personal invective against Prof. Fryshman). A video of the CPJCE’s royal reception by the then prime minister of Lithuania in 2015, when the convention center “deal” was made, has become a study in body language, all the more so since none of the three rabbis then in Vilnius were even informed of the meeting taking place. Two of them, Rabbi S.J. Feffer and Rabbi Chaim Burshtein, went on to issue  powerful statements about the cemetery, for which the latter was fired in 2015.

By contrast, the democratically elected leadership of the Vilnius Jewish Community, representing the vast majority of Lithuania’s remaining Jewish community, has repeatedly called for the convention center to be moved to another location, in a series of radio debates, in a New York Times report and in a recent public letter. Virtually all rabbis of Lithuanian Jewish (Litvak) heritage have issued similar calls. An international petition launched by Vilnius native and resident Ruta Bloshtein, one of the key figures in the city’s small Orthodox community, has obtained around 45,000 signatures (including that of the widely admired American Jewish leader Herbert Block, a dissenting member of the US commission who issued a statement last July). There have been calls from US congressmen, senators and members of the Israeli Knesset, in addition to calls from a wide array of Jewish and non-Jewish figures.

One of USCPAHA’s members is Marjorie Margolies, the mother-in-law of Chelsea Clinton.

A copy of the summons and complaint follows, with the plaintiffs’ personal data blacked out. Please use the handles in the upper left hand corner to turn pages.

USCPAHA is taken to court