Posted on 5 December 2018 by Defending History

For many centuries, the Jews of Vilna (Yiddish Vílne, formal Ashkenazic Hebrew Vílno, modern Hebrew Vílna), and indeed, those from a huge radius of towns and villages in all four directions that looked to the then “Jerusalem of Lithuania” as their spiritual capital, the streets of the oldest Jewish settlement in the town were lovingly known as Di yidishe gas. The narrow dictionary definition is indeed “the Jewish street” but in the Yiddish of Vilna, as in other cities with highly developed Yiddish culture, the phrase came to signify the entire neighborhood in the sense that could perhaps best be captured by something like “our Jewish part of town.” When in 1920, the then Polish authorities offered the Jewish community the opportunity to name a few streets in town, Yídishe gas (Polish Żydowska) became one of them, for the neighborhood’s primary street. When the democratic Lithuanian independence movement of the late 1980s reached the stage of ridding the city of hated Soviet-imposed names, the old name was rapidly and boldly, restored, in its translative Lithuanian form, Žydų gatvė.

Much more recently, as part of a belated program to provide some symbolic street names for various of the cultures that together made Vilnius the great city it is, the Jewish component was alas marred by anti-Yiddish sentiment on the part of various (Jewish!) authorities for whom any East European Yiddish culture that differs from modern standard Israeli is inherently of a lower order of legitimacy, even on the tragic historic territory where Yiddish was the one spoken Jewish language of one hundred percent of the Jewish population (see our 2016 report). An even more painful fiasco ensued with a postage stamp  purporting to honor the Litvak heritage (our 2017 report).

The current exhibit on prewar Lithuanian Jewish life, entitled Reflections in a Shattered Mirror, is a highly impressive, successful and copiously filled effort that says much about the texture, and the internal Jewish multiculturalism that ranges from Hebrew to Yiddish language and culture, from political left to right, from very religious to very secular. Perhaps the current exhibit is weakest on the traditional religious and the secular Yiddish culture, but any curatorial balances struck on such matters are inherently incapable of “satisfying everyone”. The organizers deserve congratulations for a major effort carried to successful completion, all the while demonstrating the enormous wealth of the National Library’s Judaica collection, which thanks to partnering with YIVO and other institutions are now finally widely available to scholars from every part of the world. Moreover, with completion of the inspirational YIVO digitization project, these treasures should at some point in the not too distant future be freely available online.

That is all the more reason for the new Judaic Studies Center at the Martynas Mažvydas National Library of Lithuania, generously supported by New York’s YIVO Institute for Jewish Research, to be sensitive to the actual culture of the Jews of Lithuania, rather than join in some effort to try “posthumously” (i.e. after the Holocaust) to try to (mis)represent that culture as a branch of modern Israeli culture to fit in with various streams of current politics.

The exhibition’s huge lead banner , high above the imposing fifth floor exhibition hall, comprises the words “The Jewish Street” followed, as a non sequitur, the words “The Gaon Elijah”. But Yiddishophobia on someone’s part (where were the YIVO scholars advising?) dictated total exclusion of the Yiddish words Di yídishe gas (די יידישע גאַס) meaning Jewish Street, and its replacement by a modern Israeli Hebrew term itself deriving from gentile views of the old street and its neighborhood: Rehóv Hayehudím (רְחוֹב הַיְּהוּדִים) meaning Street of/for the Jews. Indeed, there was a Vilna name in the city’s traditional Hebrew that was used in various formal and legal Jewish documents (הָרְחוֹב הַיְּהוּדי), which is the authentic European Hebrew form of “The Jewish Street” as understood by the pre-Holocaust Jewish civilization. The organizers could have rapidly found it in Leyzer Ran’s magnificent three volume Jerusalem of Lithuania (N.Y. 1974, vol. 1, p. 64.). Come to think of it, he total absence of Leyzer Ran’s contributions was a rude shock to Jewish Vilna connoisseurs who visited the exhibit.

As for the second line, “The Gaon Elijah”, the omission of the traditional Jewish honorific Reb (′ר), has seemed to religious visitors to the exhibit of, again, a modern secular Israeli spirit (phrasing used for rock stars and the like) usurping the genuine article and insulting traditional Litvaks. Here, either the traditional Hebrew (הגאון ר′ אליהו מווילנא) or  Yiddish (דער ווילנער גאון), would have been culturally appropriate and respectful. 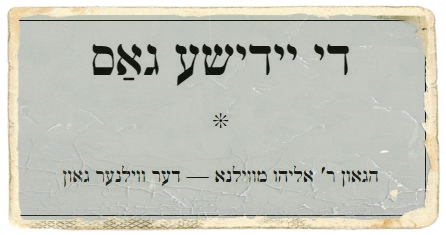 The exhibit is adorned by catalog booklets issued in both English and Lithuanian (Reflections in a Shattered Mirror, and  Atspindžiai suskilusiame veidrodyje). Its authors take great care with the Hebrew transcriptions, but made a veritable hash of Yiddish transcriptons, marring the otherwise admirably academic status of the catalog, and indeed, the exhibit. Perhaps there was nobody to consult at the various “Yiddish institutions” in Vilnius funded by millions of dollars where (outside a lucrative summer course) no Yiddish is taught, researched or otherwise available, and in the case of the once-proud Vilnius Yiddish Institute, is led by a Yiddishless director of Yiddish studies who is (surprise surprise) a member of the state’s “red-brown commission” that often uses Yiddish, Litvak and Jewish culture as decoy to deflect attention from Holocaust revisionism in accordance with the 2008  Prague Declaration.

Turning to the honest representation of pre-Holocaust East European Jewry in its own splendid internal diversity, such exhibits in the future might consider being more sensitive to the many internal secular Yiddishist environments of vast creativity (they were affiliated with a truly diverse cross-section of liberal and socialist movements), rather than them being swept under the proverbial rug. At the other end, the rabbinic religious side of things, any future exhibit on interwar Jewish life in Lithuania should include some of the original rabbinic works (not reprints of older standard texts) by the fabled Movshovits and Kagan publishing company (Movšovičiaus ir Kagano spaustuvė) in Keydán (Kėdainiai).

There is no question that bona fide Yiddish studies are today very weak, and in many countries the “word” Yiddish has become a delinguified free-for-all on behalf of any number of commercial, political, cultural, nostalgic and other interests. But here in the onetime “capital of Yiddish culture” (the late Leyzer Ran’s apt phrase), the language, literature and culture of the largely annihilated Jewish civilization deserves rather better. The more so from institutions benefiting from such productive partnership with YIVO in New York, the nominal successor to the Vilna YIVO that rapidly became the champion of bona fide interwar higher Yiddish culture internationally.