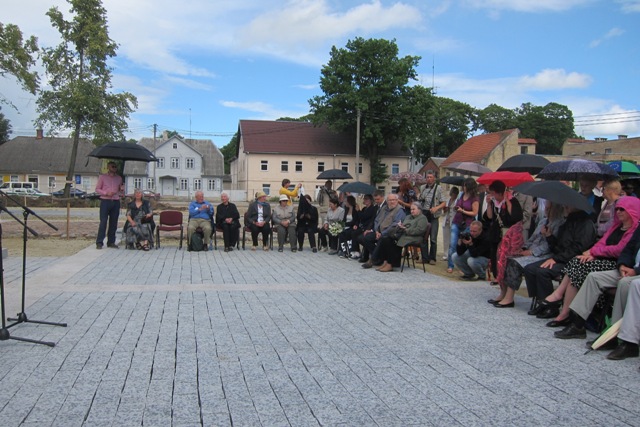 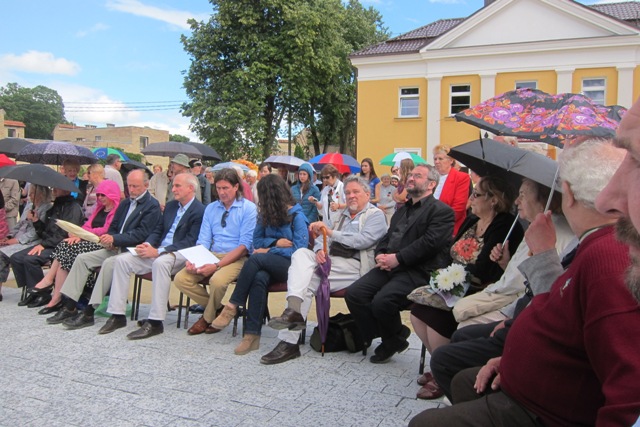 As if by divine intervention, the weather seemed to change theatrically every few minutes during the program, alternating between sunshine and rain. When, near the end, it came time for the unveiling of the plaque and the reciting of the ancient Aramaic Kaddish prayer, the English, Lithuanian and Yiddish letters seemed to be adorned by the fresh tear-like raindrops. 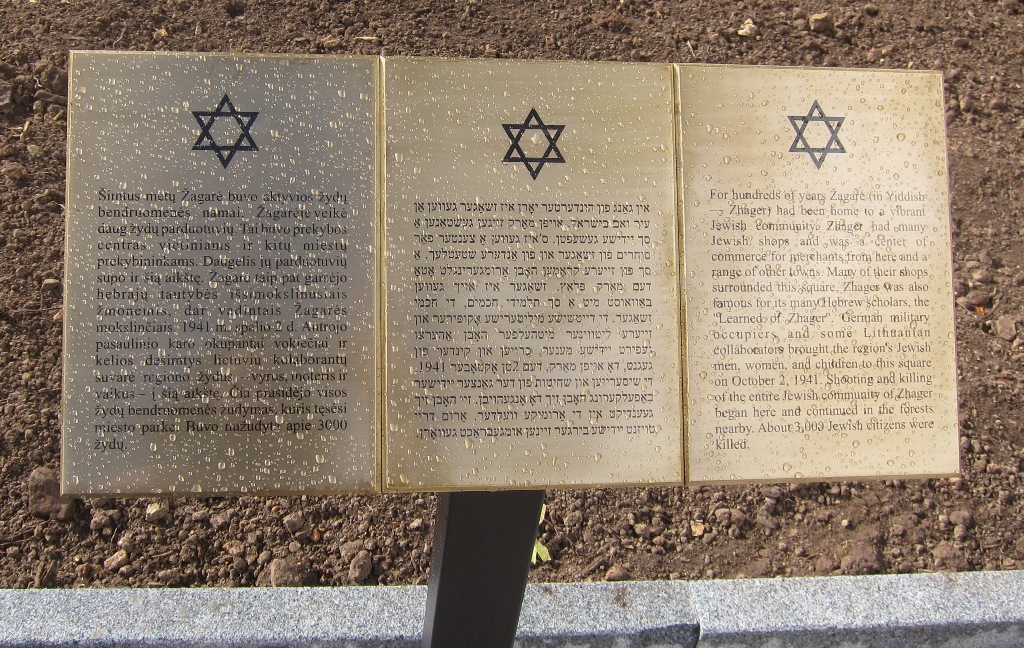 One of the most famous Lithuanian shtétlakh (shtetls), Zhager, is actually preserved in Litvak collective memory as two towns facing each other across the local river, Alt-Zhager (“Old Zhager”)  and Nay-Zhager (“New Zhager”), both of which are hundreds of years old. Today they constitute the Lithuanian town Žagarė, in the country’s far north, close to the Latvian border. In the late Berl Kagan’s classic encyclopedic Jewish Cities, Towns and Villages in Lithuania (NY 1991), the town’s phenomenal Jewish cultural output over the centuries occupies forty folio columns of densely factual text. The book, in Yiddish, will hopefully be made available one day in full translation.

The Jewish population, numbering thousands, was wiped out in 1941. The near completeness of the massacre was a result of the massive local participation in the murder of the town’s Jewish residents under Nazi rule. As elsewhere, a small number of inspirationally brave local Lithuanians risked their and their families’ lives to hide several Jewish residents. The rescuers were duly acknowledged by various of the speakers.

Among those in attendance were New York Times columnist Roger Cohen, himself a scion of the town’s Cohen and Soloveitchik families. His 2011 article on the death of the last Jew of Zhager, Isaac Mendelson, resonated today, as speakers expressed their sorrow that the one survivor in recent years did not live to see his people commemorated in the center of town. But Mr. Mendelson’s son was on hand to speak about his father’s life and hopes. 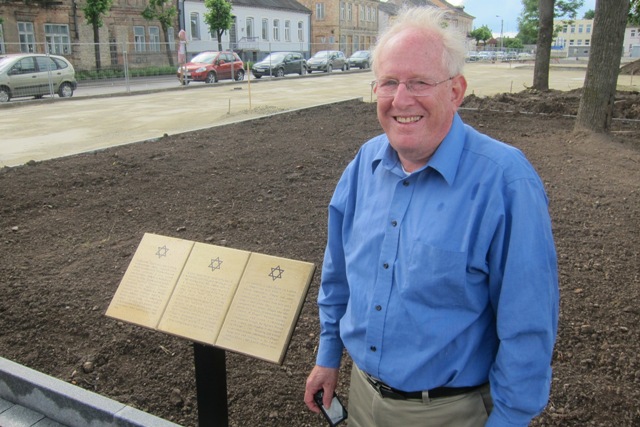 Cliff Marks at the unveiled plaque in Zhager

The plaque project came to fruition by way of close cooperation between a group of international descendants of Zhágerer (Jews of Zhager), including urban planning specialist Cliff Marks, of Seattle, Washington. Mr. Marks is the editor-author of the website Zhager. In his remarks, Mr. Marks gingerly noted that his own background in urban planning was vital in understanding that the right place for the plaque is the center of town.

Author Rose Zwi, originally of South Africa and now Australia flew in for the event. She is the author of Last Walk in Naryshkin Park and seven other books.

Other partners to the project, who flew in for the event, included Joy Hall, a native of Newcastle on Tyne, now resident in Carlisle, whose paternal grandparents came from Zhager. She was the founder of Lithuania Link, which for a decade and a half generated numerous educational, cultural and social exchanges between Cumbria in England and Žagarė.

The master of ceremonies was Sara Manobla of Israel (originally from the UK), was for many years head of the English language section of Israeli Public Radio. In a particularly moving few moments, she told the assembled about her ongoing project to win Yad Vashem recognition for the Levinskas family of rescuers in Zhager, entailing the meticulous collection and presentation of the evidence. She is determined to move forward with all due speed, because “Leonas Levinskas is now 84 so time is running out.” 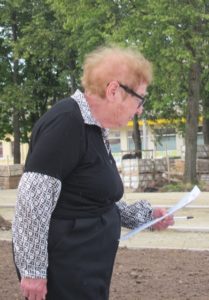 The primary partner from regional Lithuanian society was Valdas Balčiūnas, a noted entrepreneur who takes a deep interest in local history and intercommunity relations.

Mr. Balčiūnas spared no effort to ensure that the complex planning for the trilingual plaques would be carried out with dignified diplomacy between all the parties, and he was determined to see the effort through to successful completion. 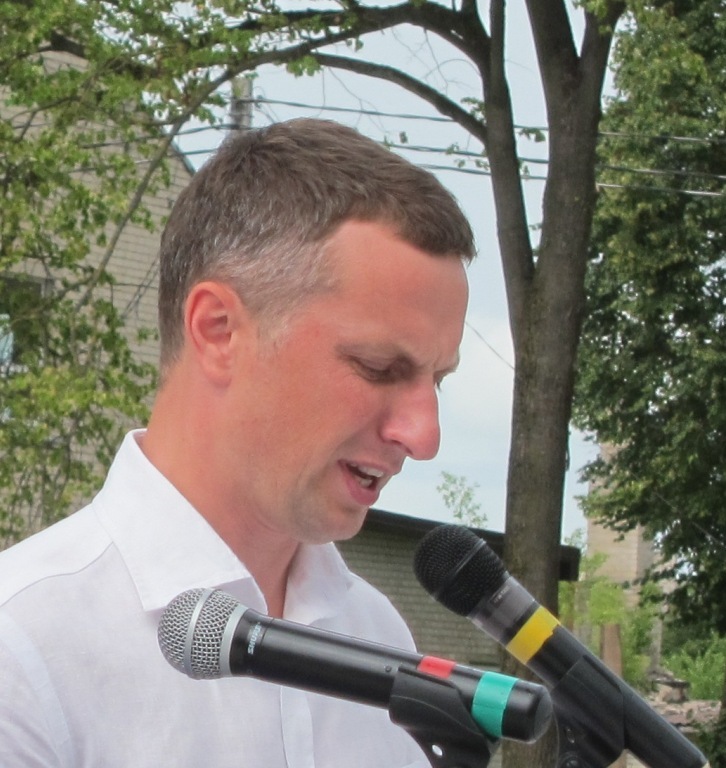 Approval for the town square placement of the trilingual plaque was graciously given by regional chief architect, Ms. Daiva Bičkienė, who was in attendance. The event was opened by the town elder.

Foreign guests included Australian film director and Zhager scion Rod Freedman, originally of South Africa. He is best known in Lithuania for his documentary film, Uncle Chatzkel, about the life of the late philologist Chatzkel Lemchen (Chatskelis Lemchenas, 1904–2001), who was born in nearby Popilán (now Papilė) and grew up mostly in Zhager. 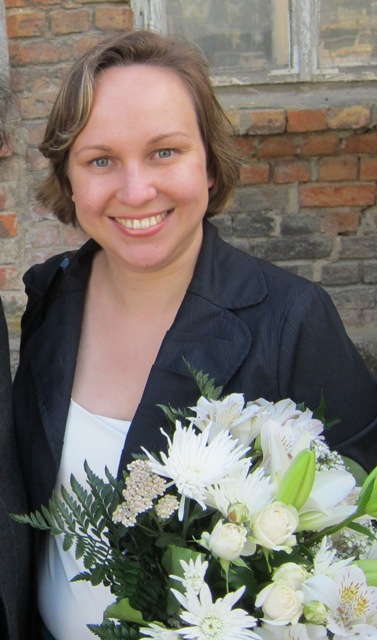 Liat Wexelman, deputy chief of mission at the Israeli Embassy to Latvia and Lithuania, at the Zhager town square proceedings.

A short but powerful address was delivered by Liat Wexelman, the deputy chief of mission (DCM) of the Israeli Embassy in Riga, which is responsible for both Latvia and Lithuania.

For Ms. Wexelman, who has come to be deeply admired by the remnant Jewish communities in both countries, this was her last appearance before the conclusion of her term of office at the Israel Embassy. News of her impending departure was greeted with sadness, and many good wishes for success in her next diplomatic assignment. “Zhager” seemed a fitting finale to her years of exemplary service in the region. Whatever the shifts and drifts of policy, the embassy’s DCM made sure that divergent views continued to be brought to the diplomatic table in a spirit of fairness and dignity.

The Litvaks present noted with some regret a dearth of school or student aged young people from the town, aside from several assigned to place flowers. But the town’s mayor, the regional park director, headmaster of the secondary school and director of the special needs school were all in attendance.

At the same time, there was a sense of relief that the ceremony was not “hijacked” by the Foreign Ministry or other national officials of the current ruling party who often play the game of honoring the victims of the Holocaust as well as tolerating antisemitism, authorizing neo-Nazi marches on national holidays, and participating themselves in Double Genocide politics, including the glorification of local perpetrators as “national anti-Soviet heroes.” In a recent retort, MEP Leonidas Donskis put it sharply: “It is impossible to pursue two mutually exclusive political goals maintaining two packages which are impossible to reconcile. We cannot sympathize with both victims and perpetrators.”

Above all, the Litvaks present were happy that on this occasion the surviving Jewish communities of Lithuania were warmly included by the organizers. The central Jewish Community based in Vilnius was ably represented by its dynamic young executive director Simon Gurevich (Simonas Gurevičius). As ever, he engaged guests in conversation in English, Lithuanian, Russian, and crucially from the cultural point of view — Yiddish.

One multilingual old Litvak was quick to note (privately, after the proceedings had ended) that the Yiddish text refers to “German military occupiers and their Lithuanian collaborators” while the English and Lithuanian texts go with “some Lithuanian collaborators” (emphasis added). There were in fact, alas, numerous local collaborators, direct and indirect, complicit in the murderous destruction of virtually all the Jewish men, women and children of Zhager. One aspect often considered by historians is the public stance — if any — taken at the time by the town’s religious, educational, economic and political leaders.

Actually, such fine differentiation between the different languages of the same text have become commonplace throughout Eastern Europe as delicate negotiations lead to “slightly different” results in each language. (Note: The Yiddish text was provided and checked by DefendingHistory.com, at the initiators’ request, on the basis of an earlier English text that differed slightly from the final.)

During the course of negotiations on the wording, advice from the Vilnius based ultranationalist (and often antisemitic) Genocide Center, recommending that the number of victims to be lowered (from 3,000 to 2,300) on the plaque, was rebuffed by the organizers. Equally, a proposal for the GC to send its own speaker to speak about the various totalitarian regimes and obfuscate what happened was not accepted, a positive portent for the future.

There was an unintended moment of mirth among the Litvak contingent, when someone did read out with a voice of grand gravitas, a doleful missive from the current foreign minister, who is best known in Lithuanian Jewish circles for his antisemitic outbursts, which resulted in a protest letter by the small remnant Jewish community in Vilnius; his “moustache response” to the Seventy Years Declaration on the Holocaust last January (covered by Mr. Cohen in the New York Times); and his more recent support for the reburial with full honors of the 1941 Nazi puppet prime minister who signed orders for incarceration and degradation of his country’s Jewish citizens. The right-wing foreign minister was met by a picket line of Holocaust survivors during his March 2012 visit to Tel Aviv. His trashing of his Social Democratic parliamentary colleagues who signed the Seventy Years Declaration prompted UK MP Denis MacShane, author of a major work on antisemitism, to write to each of the MPs attacked by the foreign minister.

But the moment of awkward mirth only served to underscore the overall success of the event. The reconciliation inherent in the historic truth being told in three languages in a plaque in the center of town, in a project conceived and brought to fruition by Lithuanian-Jewish partnership, and without the presence of national politicians, can become a template for emulation across the land.

Most of the more than 250 annihilated Jewish communities in Lithuania are not acknowledged by any explicit mention in town centers, a policy that has carried over to the nation’s recreated old town at Rumšiškės, a major tourist site.