An imaginary speech, not delivered by any of the high government officials who addressed the commemoration at the mass murder site of the Jews of Plungyán (Plungė) on 17 July 2011.

My dear friends, it is precisely because I am a proud official of the government of independent, democratic, Lithuania, and I love my country, that I am able to speak here today openly, on the seventieth anniversary of the murder of the Jews of Plungė  — Plungyán, as they proudly called it in the Yiddish that rang through its streets for so many centuries.

I stand before you not to make excuses, or complicate the issue to obfuscate what happened, or to buy your favor with useless platitudes, but to the contrary, in the spirit of openness and democratic maturity. There is no country on this earth without its historical stains and shameful episodes, and the voice I seek today is perhaps analogous to that of my esteemed  American colleagues confronting that nation’s African-American and Native American history.

Let me get right to the point. The 1800 innocent men, women and children, peaceful citizens of this town, who lie buried on this hill, were not some collateral damage in Lithuania’s victimization by the big aggression from the Soviets in the East and the Nazis from the West. They were not victims of some general forces of war, destruction and malaise. They were not part of some hapless equation of Nazi and Soviet totalitarian regimes. They did not fall prey to some misunderstanding between peoples.

And — they were not killed by the German invaders.

There were on those days a couple of German observers here who felt no need to interfere or call in reinforcements because the local Lithuanian forces who had “liberated” this town from the Soviets (who were obviously fleeing the German onslaught on the USSR that got underway on 22 June 1941), these local forces with their white armbands, comprising mostly people from this town and its region, carried out the brutalization and killing — and pillaging — with their own hands and murderous zeal. The babies whose heads were smashed against the trees to save ammunition; the schoolgirls and boys; the religious and rabbis and scholars; the old, sick and infirm; all these people of all ages and shapes, these 1800 people, killed because they were Jewish and for no other reason. They had nothing to do with communism or the Soviets having occupied Lithuania a year earlier, and it would have been quite impossible to rationally believe any of the pathetic and demeaning excuses one sometimes has occasion to hear.

All of these 1800 Jewish citizens of Lithuania were killed by our local people who carried out the barbaric humiliation, murder and plunder of their own neighbors with relish.

It is a source of shame to me, and indication of how much remains to be done in our young democracy, that there are among our own academics, politicians and others those who would still try to whitewash or even sanctify these murderers as some kind of patriots or rebels because they “thought” they were thereby being patriotic. Nobody with pride in his country can entertain such pitiful nonsense that does not befit our great nation, with its magnificent history of centuries of tolerance engendered by the Grand Duchy of Lithuania which provided haven to so many people and peoples for centuries.

I am with every bone in my body confident that my own words will be recorded by future generations as those of a true patriot of my country, even if I will be pilloried tomorrow in our mass media here.

It is for our teachers and historians to find the wisdom and words to teach the sad truth to our pupils today and for future generations, and it is by virtue of telling this historic truth that we grow as a nation in the democratic family of Western nations that believes in confronting painful truths from our past rather than trying to obfuscate, mitigate or deflect by way of circumlocutions and deceit, or the financing of commissions, proclamations and resolutions that would seek to equalize that which is not equal, to equate that which is not equatable, to conflate that which is so clearly unique.

And, that means, not incidentally, that those Lithuanians who risked their lives to save a Jewish neighbor, and one of them, Kazys Vitkevečius, stands with us here today, had to be much braver than in those countries where the killing was carried out by hated foreign invaders, or in those from which Jews were deported. Such Rescuers as Kazys are the real Lithuanian heroes of this day and for all time, who saved a neighbor from the genocide perpetrated by those of their own neighbors and countrymen who posed as patriots and rebels dressed up in white armbands, while in fact murdering their innocent neighbors of another ethnicity and religion. Rescuers like Kazys are Lithuanian heroes whose life is the greatest testament to the courage and values of our nation. If only there had been many more of them. But that is not the point. The point is that even in this darkest hour of our history we had our true heroes. Only a fool afflicted with a kind of lumpen-patriotism and the very Aryanesque evil that brought this upon us would try to bypass them — the Rescuers — and turn the barbaric murderers into the supposed heroes of those times.

It is impossible to stand here and not think especially of the dozens of teenaged Jewish girls from the local high school who were told they could save themselves by baptism, only to be brutally abused and murdered like all the others, but in their own pit a few meters from where I stand, here on this hill. I stand in awe here before The Weeping Girl, monument to these girls by the last Jew of this town, Jacob Bunka, who is thankfully here with us today.

And I salute Jacob Bunka, not only for his contributions to art, in the best spirit of our traditional Lithuanian wood sculpting, but, looking at the World War II medals on his chest, for his courageous and heroic contributions to the defeat of Nazi Germany. I do not know why his war service was not mentioned yet by other speakers — an oversight I am sure — and I pray they will join me in extending our thanks to him and all the other veterans who drove the Nazis from our country. To put it very simply, had the Nazis won the war, there would have been no Lithuania to reclaim its independence twenty-one years ago. 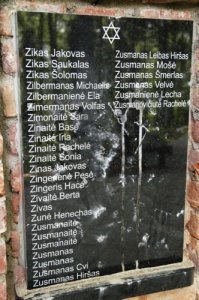 Turning to the events of this past week, I am so very sorry to see that this splendid new monument with all the names of the known victims engraved was defaced just days before our ceremony today. I had hoped the defacing would be left intact, as a reminder of the intolerance that mars our life even today, as an educational message. I did not subscribe to the decision to cover it up hastily without trace before our ceremony today. This new monument is here to attest to the scourge of intolerance then and now, not to serve as cover-up of anything.

And, as I am sharing my own little dissent from various decisions, I want to say that I was sorry to learn about the agreement to take down the old Jewish synagogue in recent years, even though the funds from the sale were slated for noble purposes. Much as I appreciate the little attractive bag of brick remnants that each of us is invited to take home today as memento, how different it would have been for the people of Plungė to have come together as one and proclaim unto the nations: ‘The old synagogue of Plungyán, our dear Plungė, will remain for us a living memorial of the rich, diverse and multicultural life of our town until the end of days. Come and visit!’ Inspired by Ezekiel the Prophet, I will dream tonight of the broken bricks in all these bags one day coming home again together, here to Plungė of Lithuania — Plungyán d’Líto, as my Jewish friends tell me it was known for centuries, for the old synagogue to be rebuilt at its rightful place in the heart of our town. 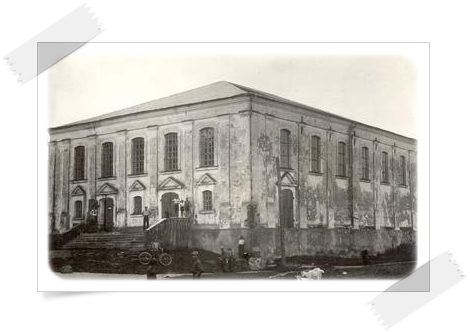 Yes, my friends, this touches on another sensitive subject, but I have come here today to lay out our ghosts on the table in front so they do not peer down from the shadow of this hill for generations to come. To preserve the old synagogue in the center of town is to declare pride in the multicultural past and in the life that was, for every day of the town’s future everyday life. To develop a mass grave site outside of town up an uninhabited hill  is an endeavor of high virtue and significance, but it can never replace what it is that a town chooses to be visible in its center to its people and those who visit. They are two very different things, inextricably linked to each other in concept and in effect in the daily life of the generations to come after us.

It is a sign of the strength of our democracy, here in Lithuania and in the European Union, that I can freely stand before you and speak these words, as we stand together to remember the victims, and to remember that their centuries of peaceful life and creativity in this town were brought to a rapid and heinous end by acts of our own people that we must condemn, resisting all efforts to excuse, rationalize or twist. In short, whoever would try to make rebels or heroes of those killers is no friend of our country.

I cannot conclude without telling my friends from the Jewish community of Lithuania, mostly from Vilnius, how moving and heartwarming it is to see them here with us today, alongside the foreign visitors and diplomats. How much more blackened would this day be if it were left only to government officials and members of the ethnic majority to mourn an extinct people in our land, to claim with hubris to represent the dead and their culture, as if we would now be out to usurp their posthumous identity too for our country’s image or tourism. And on that note, I regretted to see that the names of the victims are provided only in a Lithuanianized form. Are we afraid to list their simple Jewish names too? What is there to be afraid of?

No matter how small and fragile, the Jewish community in our country is a veritable national treasure, surviving as it does in the country with the greatest percentage of Holocaust murder in all Europe. I am committed to help this remarkable community to survive and grow in the decades and centuries to come, and this seventieth anniversary of our darkest moment is as good a time as any to start to build a better future. For today, my office has prepared for you to take home two facsimiles  of some old postcards that for me convey the mood and the spirit of the proud, comfortable and authentic Litvak Jewishness that was the heart of our town. 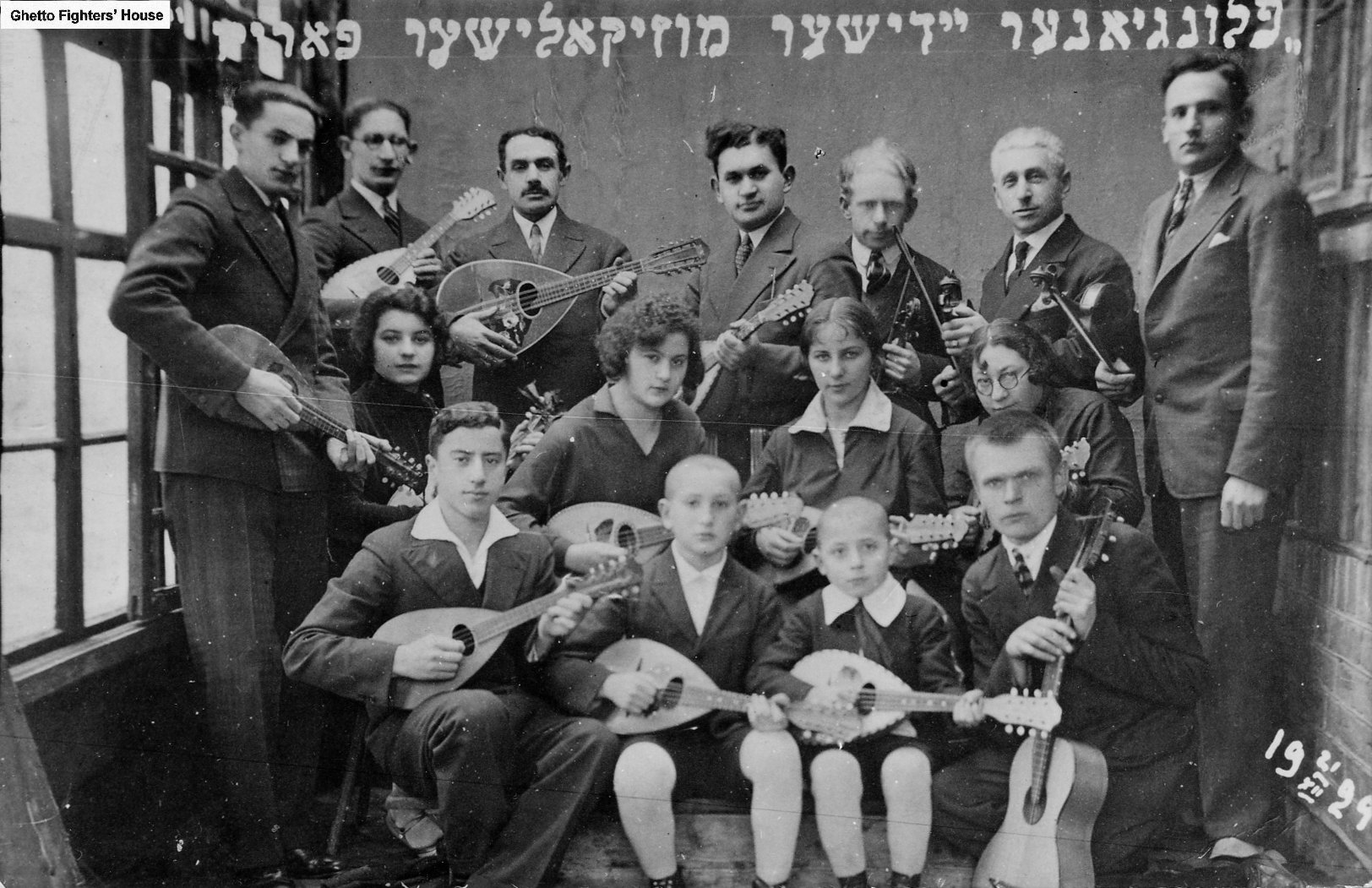 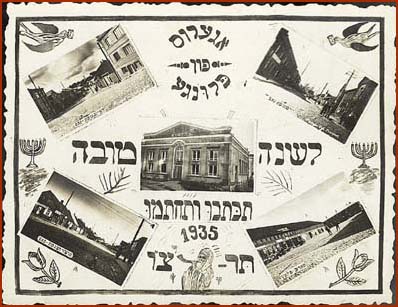 1935 Jewish New Year Card (5696 in the Hebrew calendar) from Plungyán.  The images reflect the Jewish community’s deep pride and sense of loyalty and belonging to their town.  Photo courtesy Fisher Family, New Zealand.