70 Years On: Address by Abel Levitt at the Memorial for the Murdered Jews of Plungyán (Plungė)

According to Jewish Law, and according to custom in other religions, a tombstone must be placed at a grave with the name of the deceased.

In the case of Mass Murder, like what happened in Lithuania during the period which we know as the Holocaust, this has not been done. The scale was too big, thousands of people killed in a single day as happened in Ponár, near Vilnius, or at the Ninth Fort near Kaunas.  Only in Plungė (Plungyán), where 1800 people , men, women, and children were brutally killed in two frightening and bloody days, has this now, today, been done. 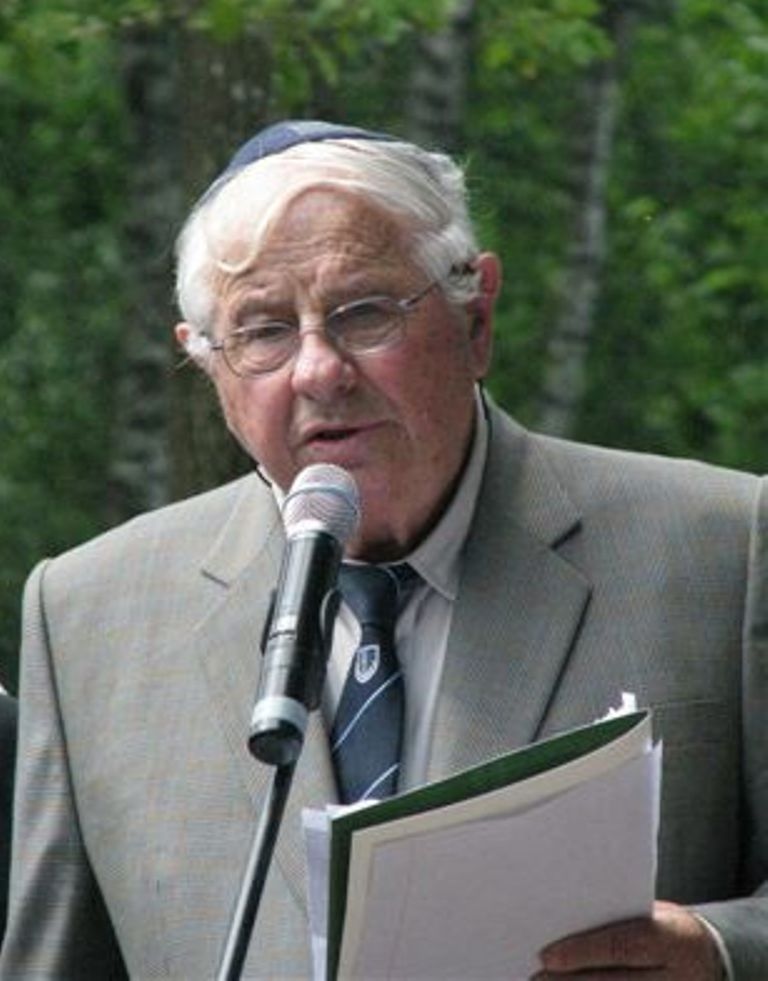 Abel Levitt of Kfar Sava (originally of South Africa), a descendant of Plungyáner, delivering this keynote address at the commemoration ceremony held on 17 July 2011 to mark the 70th anniversary of the massacre of the Jews of Plungyán. Abel Levitt and his wife Glenda were among the primary enablers of the new monument that lists all known names of the town’s Jewish residents killed at this site seventy years ago.  Photo: Sonya Meyer (Levitt).

We have with the help of Jacob Bunka and with the determination of Yad Vashem in Jerusalem, and helped by researchers, 1200 names, the names that appear on the Memorial Wall, the tombstone to our martyrs.

The list is not yet complete. Six hundred names are yet unknown. Our challenge is to discover those names, which will appear in time, here in Kaušenai.

Today we can see for ourselves the names of those people, family names like Sher and Odes, Krieger and Peires, Press and my own family Levitt. My grandmother Sheyne, my uncles Note and his wife Yete, Yisroel and his wife Sore, the beautiful daughter of the Krieger family; my aunts Feyge And Hene, and the children. We are here as a family from the State of Israel, my wife Glenda and I, our four  children, our cousins Dr Eliezer Yariv and his wife Rachel, to stand and mourn and to reflect upon the senseless loss of these 1800 martyrs of our people, the Jewish people.

On this Memorial Wall we read the names of the people of Plungė, or as they knew it in the Yiddish language, Plungyán.

Before the madness that engulfed this land in the summer of 1941, one could hear these names in the Plungyán, names like Shmuel or Yitskhok, Moyhe or Yosl, Feyge or Khane, Ester or Sore, as the children laughed and played, as the men conducted their business in the market place, trade between Jews and non-Jews,  and the women folk chattered as they prepared for the Holy Sabbath.

The act of recording these names gives this burial place a new dimension to those of us who come here to do our mourning, and our weeping, to those of us who come not to ask How, how the bloody acts were perpetrated, we know how. But to ask Why. Why did evil men, Nazis and Lithuanians alike, people from religious homes, commit such ungodly acts?

And while we gather here today to mark the seventieth year since the tragedy, let us never forget the acts of those brave Lithuanians who did save Jews. People like the saintly man Kazys Vitkevečius, here with us today, who in 1941 as a mere fourteen year old, and together with his mother Emilija saved Jewish children. For this they were honoured by Yad Vashem in Israel as “Righteous among the Nations” along with the families whose names you saw recorded down below on the plaques. These people who did act, these noble people, are in our debt, as we mourn today our families, their neighbours and their friends.  I ask again and again, are there such brave people amongst us today who are ready to stand up against intolerance and antisemitism, and act bravely and with courage when we are put to the test?

Are there diplomats amongst us here today, who would do as the Japanese consul in Kaunas did, against the instructions of his government and save thousands of Jews by issuing them with visas? Or like Jan Zwartendijk of the Netherlands? We stand in admiration of those Lithuanians, farmers and priests, and ordinary people who performed extraordinary things. 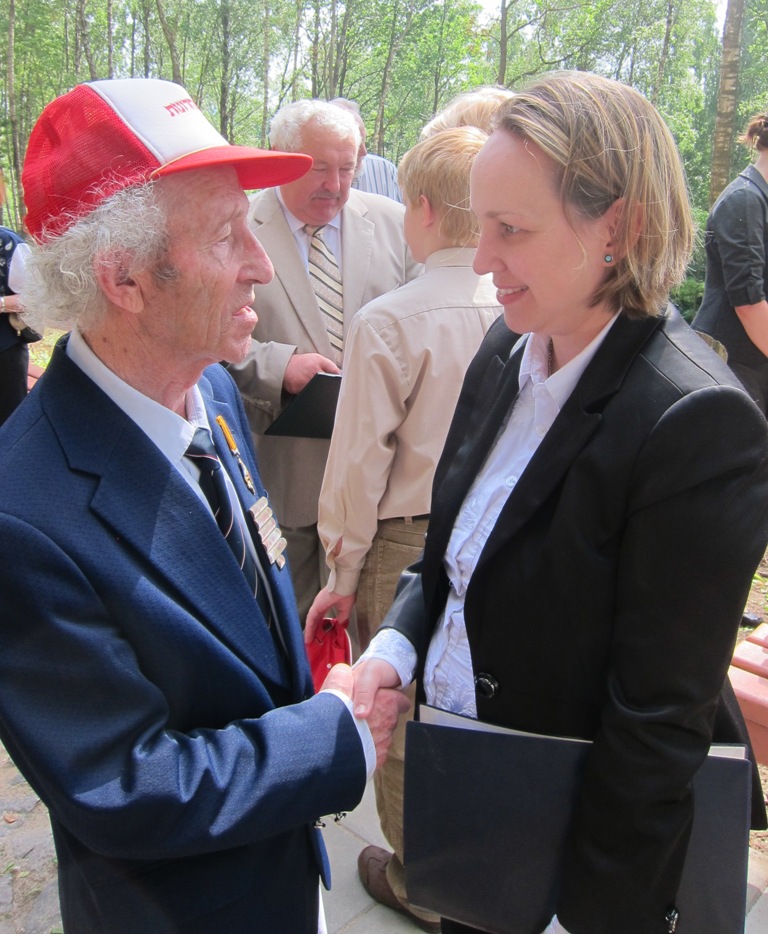 Renowned wood sculptor Jacob Bunka (Yankl Bunk), 88, the last Jew of Plungyán, in conversation with Liat Wexelman, deputy chief of mission at the Israeli Embassy in Riga, who also delivered an address at the event. In the background, the town’s mayor speaks to one of the local high school pupils in attendance.

It is only by educating the young people, as you do in your schools in Plungė today, about what happened here, that we can hope for a better understanding between our peoples,  as we follow the words of Almighty God, as told by him to the prophet Joel:

I end with the words of Jacob Bunka, engraved on the first plaque as we enter this site:

“Here on Kaušenai Hill, memory laments. Here is the never healing wound of Plungyán which is painful to noble people the world over. Yet Kaušenai is a holy site, throbbing not only with agony, but with the incantation: We were, we are, we will be.”

This entry was posted in Commemorations for Destroyed Communities, Events, Opinion, Plungyán (Plungė). Bookmark the permalink.
↑ Return to Top