Friends in TORONTO and CANADA: Some links relating to the recent “Holocaust in Lithuania” symposium at the University of Toronto: https://defendinghistory.com/summary-coverage-of-toronto-24-nov-2013-symposium-on-the-holocaust-in-lithuania/61406 Toronto | DefendingHistory.com defendinghistory.com
Posted in "Jewish" Events as Cover?, "Red-Brown Commission", Canada, Lithuania, Litvak Affairs, News & Views, Opinion, Politics of Memory | Tagged Christoph Dieckmann, Christoph Dieckmann + Holocaust in Lithuania, Fern Smiley, Holocaust Studies in Toronto, International Commission for the Evaluation of the Crimes of the Nazi and Soviet Occupation Regimes in Lithuania, Sara Ginaite | Comments Off on Facebook Discussion (3 to 11 Dec. 2013) on a Nov. 2013 University of Toronto Event

Posted on 24 April 2011 by Defending History

24 April 2015.  CBC News Manitoba: ‘The problem with the monument to victims of communism’ by Dougald Lamont.

1 February 2015.  CounterPunch: ‘Toronto Star is running with the extreme right in Ukraine’ by Roger Annis.

8 December 2014.  Defending History: ‘A lowpoint in American (and Canadian) diplomacy?’

3 December 2014.  News by InSerbia: ‘Why Did US, Canada and Ukraine vote against condemning Nazism at the UN?’ by John Meinhold.

26 November 2014.  Huffington Post: ‘Why Canada voted against resolution at UN to combat “glorification of Nazism”’ by Ryan Maloney.

23 November 2014.  National Post: ‘Russia criticizes Canada for voting against its UN resolution to combat “glorification of Nazism”’ by Joseph Brean.

5 December 2013.  DefendingHistory.com: ‘Summary coverage of University of Toronto 24 Nov. 2013 symposium on the Holocaust in Lithuania’.

27 August 2013.  DefendingHitory.com: ‘Studies on Ukrainian Nazi collaborators and their glorification in modern Ukraine — and Canada’ by Grzegorz Rossoliński-Liebe.

[28 February] 2013.  Journal of Slavic Military Studies: ‘The honor they so clearly deserve: legitimizing the Waffen-SS Galizien’ by Per Anders Rudling.

21 October 2012.  DefendingHistory.com: ‘Open letter in support of Per Anders Rudling’.

12 May 2011.  ‘Gail Asper at JFM luncheon: developing the museum by the agitations of a single issue interest group is wrong-headed’ by Rhonda Spivak in Winnipeg Jewish Review.

8 May 2011.  Extracts assembled from internet comments, with sourcing provided, including, at long last, the self-identification of ‘Semperveritas’ as Professor emeritus Roman Serbyn (University of Quebec, Montreal).

3 May 2011.  ‘This year’s Yom Hashoah is different’ by Dovid Katz in Winnipeg Jewish Review.

23 April 2011.  Publication of Open Letter signed by 105 international scholars in the National Post (p. 5).   List of signatories updated regularly on the website of the Canadian Institute for the Study of Antisemitism (CISA). The Canadian Jewish Congress posting.  See also Letters received by CISA.

22 April 2011.  Critique of the Open Letter, with a select list of signatories. . . on Blogmedia24.pl [in Polish].  Note start of 3rd paragraph: ‘It is difficult to mention all the signatories of the letter, so I stop at  a selected group: Achinger, Bechtel, Breitman, Ganzer, Gold, Goldberg, Grossmann, Gutterman, Haberman, Hausmann, Hirsh, Horowitz, Kaplan, Katz, Kramer, Lipstadt, Litvak, Lower, Rabinovici, Risch, Rudling, Samuels, Siberklang, Steiman.’ …

21 April 2011.  ‘Ukrainian Association tells foreign scholars to stay out of museum debate’  by James Adams in The Globe and Mail.

21 April 2011. ‘The anti-Ukrainian hate campaign infects the Winnipeg Free Press’ on The Black Rod [by ?].

16 April 2011.  Exchange of views between L. Luciuk and P. Rudling in the Globe and Mail comments section.  Extracted from here.

15 April 2011.  ‘My academic is bigger than your academic’ by Dan Lett in the Winnipeg Free Press.

12 April 2011.  ‘Open Letter: International scholars issue open letter on the UCCLA, UCC, and the CMHR’ onCanadian Institute for the Study of Antisemitism (CISA).

8 April 2011.  ‘No place for a gallery on the Holocaust in the new Canadian Museum of Human Rights?’ by David Hirsh on Engage.

2 April 2011.  ‘The war against the Holocaust’ by Catherine Chatterley in the Winnipeg Free Press.   ALSO available, with inclusion of images of the antisemitic ‘pig postcards’ printed and circulated by t he Ukrainian Civil Liberties Association (UCCLA), on the CISA website.  Also, with one postcard image, in the Winnipeg Jewish News of 8 April 2011.

29 December 2010.  ‘Celebrating fascism and war criminality in Edmonton. The political myth and cult of Stepan Bandera in multicultural Canada’ by Grzegorz Rossoliński-Liebe on Kakanien Revisited.

22 August 2009.  Vilnius reception at the home of Prof. Dovid Katz in honor of Professor Sara Ginaite of Toronto, veteran of the anti-Nazi resistance, who defied prosecutors’ threats to visit her native Lithuania. In a show of support, the Canadian Embassy’s Chargé d’affaires Habib Massoud and the US Embassy’s political officer Tim O’Connor joined the group honoring Prof. Ginaite, as did the Lithuanian foreign ministry’s Jolanda Kriskovieciene in a personal capacity. Photo from left: Tim O’Connor; Faina Kukliansky, chairwoman of the Vilnius Jewish Community; Sara Ginaite; Dovid Katz; Jolanda Kriskovieciene. 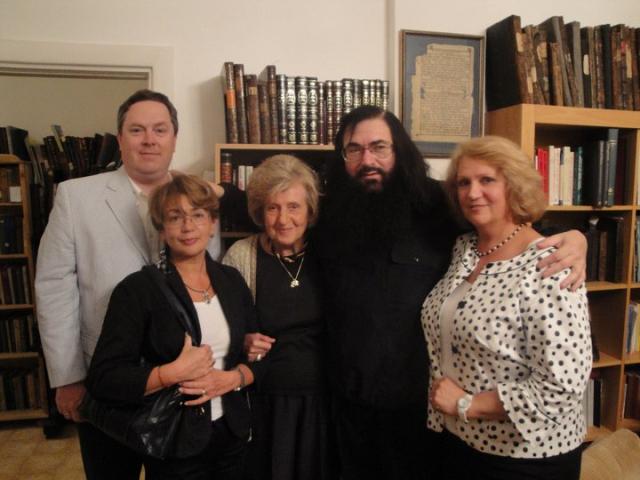 July 2009. Canada, along with Britain and the United States and the other Western powers, unfortunately signed ‘The Vilnius Declaration’ of the OSCE (Organization for Security and Cooperation in Europe) in July 2009, into which the Holocaust-obfuscating East European far right had slipped ‘just two short points’ taken to indicate acceptance of Double Genocide as national or international Western policy (document here, see p. 48, points 3 and 10), alongside traditional Holocaust-respecting language (e.g. point 4 on the same page); the problem being, that it is the revisionist lines alone which serve as catalysts — and cover — for the growing effort to minimize the Holocaust on the ground (see e.g. here and here) while providing lip-service to all sides in international declarations. [UPDATE: In December 2010, however, the European Union itself began to reject the eastern states’ insistence on international agreement on their revisionist Double Genocide history (see here and here), leaving a question mark over where Canada, Britain, the US and other Western powers now stand on the revisionist versions which frequently attempt to discredit the Allied war effort, and sacrifices, in defeating Nazi Germany.]

20 March 2007.  ‘Noah Shneidman’s Vilna Ghetto boxing medal’ (by Dovid Katz) in the Algemeyner Zhurnal. Follow-up article on 16 August 2007.  Two articles in Yiddish on the Vilna Ghetto boxing medal of Professor  N.N. Shneidman (Toronto), found in Vilnius, and returned to its rightful owner (despite concerted efforts to the contrary), thanks to the dedicated and wise diplomacy of Canada’s Chargé d’affaires  in Vilnius, Brian Herman.