Story of a Little Roma Boy in Modern Vilnius

Posted on 25 November 2020 by Defending History 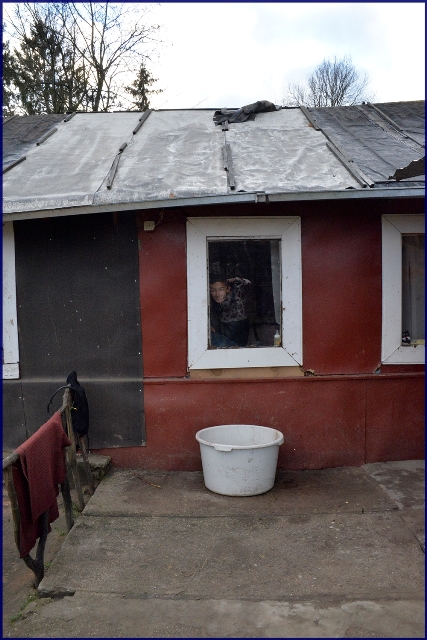 Vitia, a little Roma boy, looks out the window of his poor red house in Kirtimai, on the outskirts of Vilnius, the Lithuanian capital

I thought for a long time about what to report about the situation of the Lithuanian Roma — about their lives today. And I decided to yell you about the little Roma boy called Vitia. Because, by telling his story I will also tell about the painful part of many Roma here in Lithuania in the final months of 2020.

But first a little background.

Historically, the tiny spot on the map Kirtimai, just outside Vilnius (Vilna), had for centuries been a stopping-off place for Roma caravans. Then, in 1956, Stalin’s regime issued an order prohibiting wandering nations in the USSR. It became a Roma settlement. The first Roma houses began to be built there and a collective farm soon followed. The Roma settlement thrived in the countryside, many raised animals and birds, worked in the collective farm or in the factories and state enterprises of nearby Vilnius.

After the collapse of the Soviet Union, the Roma in Kirtimai lost their jobs and livelihoods. Around 1996, drugs came to Kirtimai. The settlement tragically became one of the most important points of drug supply in Vilnius. Involvement with drug trafficking devastatingly became one of the main sources of livelihood for the poor Roma, who, due to their social status, carried out the most dangerous activities of the higher-level drug dealers for a minimum wage. These “higher-ups” often arranged for the killing of Roma people who were in prison, and sometimes, their families back home too. Roma lived in poverty, being denied everyday honest jobs often because of deep-seated  prejudice and anti-Roma racism.

In 2015, the Lithuanian state’s forced evictions of Roma from Kirtimai began under the Orwellian name of “Roma integration.” The Roma lost the right to their community land in Kirtimai and were spread out (in other words separately) to the neighborhoods of Vilnius and its environs. Some have taken advantage of social housing provided by the municipality, while others live as best as they can. For Roma, the forced dispersion of their tightly-knit community, which has its own ancient language and culture, is a national tragedy.

There are no reliable statistics yet on the situation of the Roma in the new conditions, but according to police reports, drug trafficking in the city has not decreased. The primary reason given for the liquidation of Kirtimai has not been effectively addressed, because it is crystal clear that changing one’s place of residence is not enough to combat a way of survival when people continue to be excluded from the legitimate labor market because of the same deap-seated prejudice.

It was ten years ago when I first saw Vitia in his home in the Roma settlement of Kirtimai, in the foyer of a poor little house. He was then chopping firewood with an axe larger than himself. The firewood was wet, as was everything around. Going into the place, full of smoke by the stove, I saw his sister and brother. The children tried to warm up by the stove. Vitia started to behave like a housewife, like an adult, even though he was only six at the time. He made sure the younger children didn’t freeze in the cold December outside the window. I don’t know where his parents were at the time because I didn’t see them that day. We met with the social worker responsible for those children and took them to classes at the Roma Community Center.

Vitia’s family is not considered to be notably distinguished by anyone in Kirtimai. The parents repeatedly sent to prison for drug trafficking and all the children were conceived during those brief periods when the parents met in freedom. Once, I asked Vitia’s mother when she became pregnant. As soon as she was released she was preparing to conceive, carry and give birth to the sixth child. We asked: whether or not it was difficult for her and whether or not she wanted another child? She replied: children are a gift and happiness from God. I did not see happiness on her face. In fact, she was an unhappy, weary woman with her children waiting for her on her way back from prison more often than they was with her, and she too felt tortured in prison not seeing the children. Vitia was Grandma Zina’s most beloved grandson, and Vitia loved Grandma very much because she raised him, just as she had raised his older sisters and brothers before him.

Vitia was accustomed to the fact that his parents could suddenly disappear from his life and then reappear. He knew what prison was and understood what his parents were incarcerated for. He hated the police with all his heart and everything to do with our world of gadgias “gadgets” (as the Roma call foreigners).

His hatred intensified when, once the parents were imprisoned, the state no longer allowed him to take care of his grandmother (after the change of custody law) and Vitia found himself in an orphanage. I visited him there, and he asked a lot about her. He thought the orphanage was a children’s prison. “Why are you holding me here? I didn’t do anything!” He was eight by then and he was in first grade with younger children. He was very ashamed of that and he went to school every day in a child’s spirit of groing to war. The situation was mitigated by rugby training donated by a Vilnius club to the children of the orphanage. Vitia loved sports and was looking forward to those workouts. He also really enjoyed visiting the pool. And, Vitia still loved to paint. When asked to draw something of his choice, he usually painted a house. A red house in the woods. 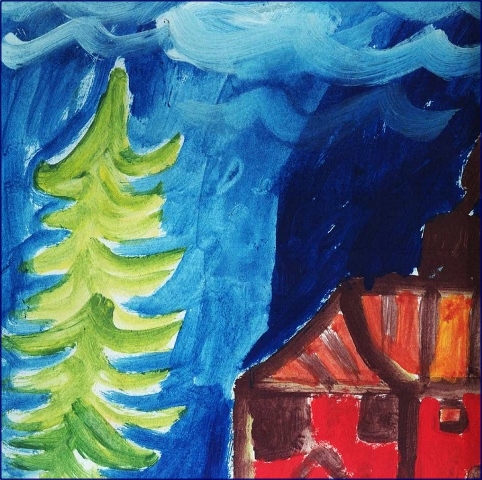 Vitia often painted a red house in the woods

“Vitia, would you like to live here?” I asked. And he always answered yes. And that the house must necessarily be red. Red as blood. He was indescribably attracted to the forest, though he had only seen it a few times. The forest for him was like a land of miracles, a place where he could be himself and hide there from our world.

As much as I could I wanted to alleviate his suffering while he was in the orphanage. I often visited him, escorting his grandmother there to enable them to meet. Unfortunately, her meetings with her grandson were in every way hindered by the administration of the orphanage. It is a quarantine invented exclusively for the Roma, a kind of policy of separation from parents, grandparents, those who keep them in their ancient culture.

Luckily, his mother was released early, under an amnesty, and Vitia returned home a couple of years later. Some time after that, the father of the family returned from Pravieniškės Prison. However, the family idyll did not last long, the mother became pregnant again and again, and shortly after giving birth, was back locked up in jail. For the same thing…

“Because, well, where do you live?” That’s what Vitia’s parents replied to me when I talked about the threat of them going to jail again. Vitia turned thirteen and he was separated from his mother again. The father and grandmother remained with the children, and the expulsion and eviction of people, known as “Roma integration” began in the village of Kirtimai. People, threatened with crushing fines, demolished their houses with their own hands, the houses they had built with their own hands, and moved to “social housing” scattered throughout the poor, cheap districts of Vilnius. “Reform” and the “Roma integration program” plunged Vitia’s family into a place unfamiliar to them, separated them from relatives and their ancient minority culture, and Vitia, like every teenager faced with problems, began to rebel. I didn’t quite see how much that reform affected his psychological state, but I suspect the child, a teenager, was badly affected by the changes. Anxiety crushed his young soul. I soon found out about his death from an overdose at the age of fifteen.

Remembering him I remember his red house and I very much hope that he is now there, in the home of his dreams, because in this world, a world that belongs to the “gadgias” there was no place for him.

We can talk a lot about “Roma integration,” and we can do things in memory of the Roma killed by the fascists during World War II, but nothing will change the fact that Roma children die without living and that social problems and indeed social programs are riddled with xenophobia and prejudice, destroying people’s lives and pushing them to the brink of death quiet often.

There are good reforms and bad reforms.