VILNIUS—Ronaldas Račinskas, executive director of the Lithuanian-government financed “International Commission for the Evaluation of the Crimes of the Nazi and Soviet Occupation Regimes in Lithuania,” widely known for brevity as the “Red-Brown Commission,” has revealed — on camera, to the producers of the documentary film Liza Ruft — his thoughts about the “war crimes investigation” into Fania Brantsovsky. The video clip of his statement was released today on Youtube.

The comments by the director of a powerful state organ housed prestigiously under the jurisdiction of the president of Lithuania (it was previously in the prime minister’s office but hastily moved before the Conservatives were defeated in the 2012 election) reflect on attitudes toward the other Jewish partisan heroes in the anti-Nazi resistance subjected to pre-trial investigations and defamation. These were dropped after the international outcry but there have been no public apologies and the defamation continues apace on the internet and in learned books.

More broadly still, the statement reflects dramatically on the essence of Double Genocide discourse on the Holocaust, which can be a Eurospeak cleanup of commonly heard exaplanations like “They were complicated times, when everyone was killing everyone” as a revisionist description of the Holocaust in which perpetrators are victims and victims are perpetrators.

Starting in 2006, two years after NATO accession, a number of former Soviet partisans in the anti-Nazi resistance — only Jews — were targeted for defamation and harassment by Lithuanian prosecutors and “Genocide Industry” operatives as part of the larger campaign to obfuscate the Holocaust, inter alia by attempts to cloud the elementary distinction between the perpetrators and victims of the Holocaust in the spirit of “Double Genocide.” The courageous response of the Jewish Community of Lithuania and its Union of Ghetto Survivors goes down as a proud moment in twenty-first century Lithuanian Jewish history. There were also numerous international responses. Resignations from the commission (and associated bodies), include the late Sir Martin Gilbert, Professor Dov Levin, and Professor Konrad Kwiet. This was part of a longer-standing series of international responses to the commission, whose founding was met by a protest from the association of Lithuanian Holocaust survivors in Israel.

The sensational new statement by Mr. Račinskas was made, of all places, at the mass murder site Ponár (Paneriai) at a commemorative ceremony, and was just released today by the makers of Liza Ruft, which explores the degree to which Ms. Brantsovsky has been exploited and manipulated for government PR since the “pre-trial investigation,” which included sending police to look for her in 2008, was dropped. It was dropped after the Defending History team coordinated closely with Western embassies in Vilnius that honored the World War II anti-Nazi hero. Events included the awarding of a US Embassy certificate, a banquet at the residence of the Irish ambassador, and walking tours of the Vilna Ghetto organized at different points by the British and Norwegian embassies, honors from the Austrian embassy, and a medal from the German president. The international response, initiated by the director of the Simon Wiesenthal Center’s Israel office, Dr. Efraim Zuroff, came to include the Economist, members of the US Congress and Britain’s Parliament, among others. 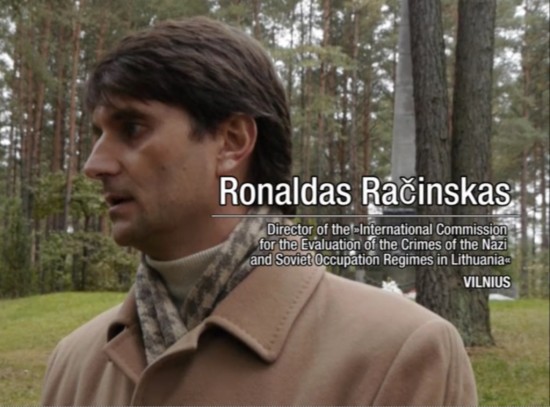 The newly released statement by Mr. Račinskas, previously known for allegedly sending different messages to Jewish and Lithuanian audiences, seems to cement his Commission’s official view of “the two genocides by the two totalitarian regimes.” Mr. Račinskas is a veteran spokesperson for his government in international documentaries on the Holocaust, though some question whether he does his nation more harm than good in these appearances. In Danny Ben-Moshe’s Rewriting History, the commission chief denied the veracity of the (vast) testimony and evidence about the killings of Jewish civilians (in his words “on a racial basis” — i.e. they may have been killed as “Communists”) in the days before the arrival or administration set-up of German forces. In Richard Bloom’s Defending Holocaust History, he defends the Prague Declaration and decries the Seventy Years Declaration (signed by eight Lithuanian parliamentarians at the invitation of Defending History). In recent years he has denounced a Vilnius Holocaust survivor, Prof. Pinchos Fridberg, as a “liar” for disagreeing with his commission.

The following is a transcript from the film’s preliminary version:

“I entirely agree that Fania Brantsovsky and others may feel bad, and I understand, but you know, the whole history was complex. In one situation, you know, the same person could be a victim, in another situation the same person can be a murderer and vice versa, but I think all of us should avoid to making a politics [sic] from these things, this is most important.

“And I personally, and our commission, is set up for reconciliation between these nations, between these groups who suffered from two totalitarian regimes, bringing to justice all kinds of perpetrators of crimes and raising the names of the heroes, on both sides.”

The new documentary also contains an interview with Mickey Kantor, vice chairperson of the Association of Jews from Vilna (in Tel Aviv), and a frequent leader of high profile trips that entail meetings with top politicians. She reveals that the prime minister promised her to send letters of apology to the defamed Jewish partisans but — didn’t. None of the Jewish war heroes in the battle against Hitler was ever charged with anything, but all  continue to be defamed extensively on the internet and in publications on the basis of kangaroo investigations. In the absence of written apologies, the campaign against the Jewish partisans continues unabated in academic writings of East European nationalist authors.

To this day, the prosecutors’ website contains defamatory material about Dr. Yitzhak Arad, who went on, year later, to unravel and expose the entire enterprise to “fix” history in his paper published in Defending History.