Posted on 15 January 2017 by Defending History

NEW YORK—Tomorrow’s daytime event featuring Nida Degutiene’s new book, A Taste of Israel: From Classic Litvak to Modern Israel (Penguin Random House South Africa 2016) is a joint production of the Consulate General of Lithuania in New York City and the Yivo Institute for Jewish Research. It will be held at the Consulate General’s offices at 420 Fifth Avenue at 12:30 PM on Monday 16 January 2017. Defending History recommends the event to our readers in the New York City area and we recommend Ms. Degutiene’s excellent book (available from many outlets including Amazon).

We commend the event and the book to our readers, confident that among its “side effects” will be an increase in interest in Litvak culture, including culinary culture, among those whose primary interest is perhaps the modern Israeli kitchen. As ever, wider issues are also raised.

In recent years Yivo has featured many “Lithuania events” (see DH’s section, scrolling to bottom to look at “upwards” in chronological order), some of them unfortunately fitting into the manipulations by a small but powerful group of Lithuanian nationalist (usually government-linked) elites intent on (ab)using foreign Jewish figures and institutions to provide cover for the special Baltic brand of Holocaust diminution and revisionism known as “Double Genocide.” This irksome, and no doubt temporary, period in Yivo’s magnificent history and future actually started with an event in 2011 that honored an antisemitic foreign minister while spurning the Vilna-born Holocaust survivor Dr. Rachel Margolis (1921-2015) who was unable to return for one final visit to her native city because of prosecutor’s threats (see her video). Some months later, that foreign minister went on to put in the records of history his infamous “moustache comparison” of Hitler and Stalin while publicly trashing the eight enormously courageous Lithuanian parliamentarians (all Social Democrats, as it happened) who had “offended” him by signing the Seventy Years Declaration in 2012.

Perhaps the most poignant document in the paper trail is the 2015 open letter in Yiddish, published in the Forverts (available also in English), from one of the last Vilna-born Holocaust survivors in Vilnius, expressing his pain at the Yivo director’s continued membership in the revisionist “red-brown commission.”

Ms. Degutiene’s admirable research, writing, publishing and championing of Litvak and Israeli cooking, which we commend and recommend, have on occasion, alas, served as a kind of cover for some of the Lithuanian Foreign Ministry’s Holocaust policies, including her husband’s, H.E. Darius Degutis’s actual positions and antics on Holocaust-related issues during the years he was Lithuania’s ambassador to Israel. These policies have by and large not gone away. They too need to be the subject of serious events that genuinely feature a healthy diversity of viewpoints.

And, alongside the various advances in culinary studies, we all hope also for more future events “on Yiddish and in Yiddish” that fulfill the Yivo’s actual mission of living Yiddish scholarship as a vibrant branch of modern Jewish culture and civilization. 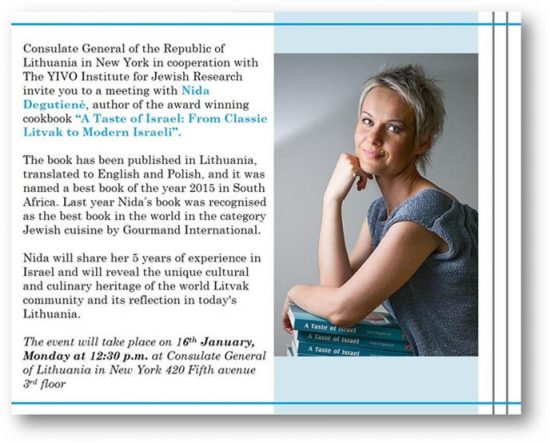