I would like to invite the participants of today’s Yad Vashem Conference in Jerusalem, “Jewish Leadership in Lithuanian Ghettos” to consider a number of issues concerning this conference. First, please be aware that Dr. A. Bubnys is the chief historian at the “Genocide and Resistance Research Center of Lithuania.” His center of activity  promotes  inaccurate and hostile memory of the Holocaust in Lithuania.

We all recall the controversies ignited by A. Bubnys in his  book  on the Šiauliai Ghetto (Shávler géto). The book was written in such a way as to give the impression that Jews perished principally because of the Jewish leadership in the ghetto, and not because of the German and Lithuanian forces who were the voluntary and enthusiastic perpetrators (a classic case of trying to blame the victims). This makes the Genocide Center’s participation in a Yad Vashem conference on the topic of forced Jewish “leadership” of the ghettos problematic, not least because of the conference’s topic being precisely that nominal Jewish leadership. Indeed, it happens here that blame for the Holocaust is deflected as far as possible on the forced Jewish “leadership” of the ghettos and the “Jewish police” in the ghettos.

Secondly, it is a gross injustice that with the active participation and blessing of the Genocide Center, the status of major local perpetrators and collaborators is being transformed with the force of law into a status of heroes of the nation.

Many of the organizers, theoreticians and de facto leaders of the Holocaust in Lithuania who have been glorified by the Genocide Center held university degrees. These include:  K. Škirpa, A. Damušis, L. Prapuolenis, J. Girnius, A. Maceina, J. Ambrazevičius, J. Noreika, J. Krikštaponis, among many others.

Have the conference organizers at Yad Vashem arranged for a suitable spokesperson for historic accuracy to stand up and reply to Dr. Bubnys and his Genocide Center at the conference?

Finally, I was disappointed that the organizers chose as the official conference photo one that was produced by Hitler’s and Goebbels’ Ministry of Propaganda for the purposes of propaganda for the West, in order to show how well the Jews live in the Nazi ghettos. Does it make sense for Yad Vashem to use this as the conference’s theme photo without the caption divulging who it was that released and publicized that photo, in what context, and for what purposes? The Nazi-produced picture is of “Five members of the Judenrat’s administration, Kaunas, Lithuania, 1943”. 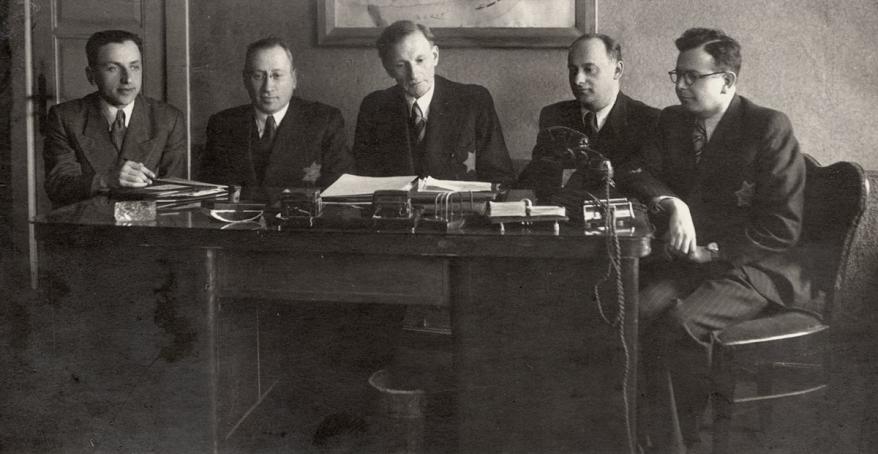