Latvian Waffen SS Worshippers Have Set Up a Monument in — Belgium 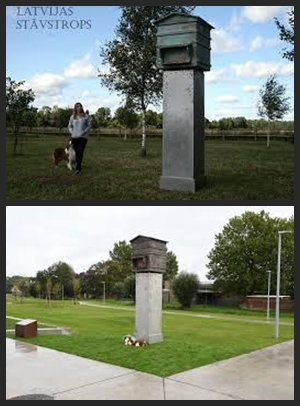 Authorities in Riga, Latvia, who tolerate marches and memorials for the nation’s Waffen SS, that fought for Hitler and swore an oath to him, are nonetheless careful not to allow an overt monument to Nazi forces in Riga. How is it that modern-day glorifiers of the Waffen SS have managed to persuade a town in Belgium to host just such a monument (pictured in both images above)? The monument stands at the “Brivibaplin” in Zedelgem, a  town situated in the province of West-Vlaanderen (West Flanders) in Belgium; GPS coordinate’s are 51.15 lat. 3.1333 long, some 20 kilometres west of Bruges.

What does Latvia have in common with Flanders in Belgium? Believe it or not: a monument in honor of Latvian Waffen SS on Flemish soil in Belgium, a country in the heart of the European Union and prime home of the European Parliament. The Latvian Waffen SS was part of Adolf Hitler’s forces in wartime, Holocaust-era Eastern Europe and its member all swore an oath to Hitler. So how could this be? This is how the official press release put it on the day:

“On 23 September 2018, in the Belgian town of Zedelgem, the ‘Monument to Freedom’ sculpted by Latvian sculptor Kristaps Gulbis was unveiled. The monument is dedicated to the Latvian Legionnaires, who did not lose faith in freedom for the Latvian State, during the winter of 1945 to 1946 when they were held in Zedelgem prisoner of war camp.”

As  excerpt from Mr. Valters Nollendsorf’s speech on the occasion:

“This Latvian Beehive for Freedom in Zedelgem is an act of deference to those nearly 12,000 of my generation who were Latvian soldiers in a foreign army and who were held captive in the Prisoner of War Camp at Vloethemveld in Zedelgem in the winter of 1945/46”

The text of both these quotes is from the “Okupacijas Muzejs” (Museum of the Occupations) in Riga, Latvia. “Laika Griežpos.” The “official’ Zedelgem POW camp website with new content, further tends to demonstrate why this is important:

“There is also an initiative to recognize the Flemish soldiers who also fought Communism on the Eastern front (…) Together, these will be a lasting memorial to both Flemish and Latvian soldiers who died at the Eastern Front.”

We know there has been ample controversy regarding the formation of the two Latvian Legionnaire Waffen SS divisions (15th and 19th). We also know that a number of Latvian historians as well as some Latvian organizations have tended more to rewrite history than to delve into the reality of the participation of Latvians under SS uniform and swastika symbol in a criminal war of extermination on the Eastern front. Let us take two fine examples of such post-fact justifications: Oberführer Adolf Ax commander of the 15th Division “…they have chosen Germany, because they seek cooperation with Western civilization. The rule of the Germans seems to them to be the lesser of two evils.”

The famous historian A. Ezergailis puts it this way:

“The Legionnaires hoped to fight off the Red Army until it was no longer a threat to Latvia and then  to turn against Nazi Germany, as a repeat of the Latvian War of Independence of 1918-1920, when Latvian forces expelled both Bolshevik and German forces .” Source: Wikipedia entry for “Latvian Legion”…

It is indisputable that, apart from the natural and justified hatred most ethnic Latvians felt toward the Soviets who had invaded their country in 1940, these men who volunteered or were conscripted in the Legionnaires divisions fought an extermination war on Soviet territory and did it brilliantly too, as Latvian Armed Forces major Edmunds Svencs wrote in a thesis published in January 2013 in Fort Leavenworth, Kansas:

“(…) Around 3,000 Latvian soldiers were decorated with Iron Crosses. Additionally, sixteen Latvian soldiers received a German Cross in Gold and twelve received the highest award, Knight’s Order of the Iron Cross, which makes both divisions the most decorated non-German Waffen SS units in the World War II .

Let us look at the figures of human and material losses suffered in the USSR in what most impartial US, UK and German historians consider a war of extermination, during the retreat, the “scorched earth’ policy used by Nazi Germany and its allies: nearly 10 million people killed during World War II on the territory of the old USSR frontiers, of whom 2,4 million  were Jews; nearly one million people died of hunger during the Leningrad blockade; nearly 5.3 million people died from hunger, bombardments and other illnesses in the course of the war; 1,710 cities were destroyed, more than 70,000 villages, 4,7 millions houses, 127,000 schools, universities and public libraries, 32,000 industrial enterprises, etc. (sources: “Nazi war crimes in the USSR”, article in French on Wikipedia, figures evaluated by a special commission constituted of historians at the time of the perestroika in 1987; in fact the real figures post-USSR might be even higher because of the natural cover-up nature of the Soviets).

And, let me add that I have seen personally in 2009, 2010 and 2012 in the Occupation Museum and War Museum — both in Riga — how these Latvian Legionnaires are still worshipped as heroes by pictures on display and books on sale (see my earlier articles, over a dozen years, on these topics) . I have also seen the March 16 march in Riga (in 2012) in honor of these Latvian Waffen SS, a disgusting sight within an EU country. To me it remains also indisputable that as the Latvian Legionnaires were sent to fight on USSR territory, which was allied to the USA, the United Kingdom and the governments in exile of the occupied West European countries including Belgium, they were at the time enemies of Belgium and remain so — the rewriting of history notwithstanding. 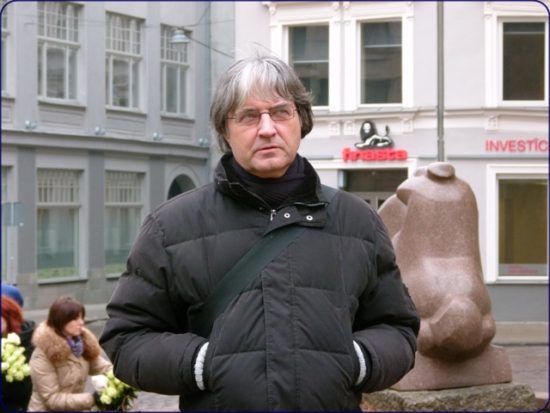 And, as far as Flanders is concerned, during the First World War, a movement for independence of Flanders was born among Flemish soldiers, deserters and Belgian POWs. Its aim was the rejection of Belgium as a united State and the declaration of independence for Flanders. Gradually, this tendency became a full-fledged movement with the creation of the “Vlaamsch Nationaal Verbond” (National Flemish Union) which, in the 1930s, turned extreme-right and, finally, advocated collaboration with Nazi Germany and actually collaborated with the German occupation structures during World War II. After the war and the condemnation of collaborators by Belgian Justice, the idea of creating an independent state in Flanders never died; quite to the contrary. And, unfortunately, in Flanders these parties prone to claiming independence were always linked to collaboration with the Nazis. Nowadays, in Flanders, there is an essential and palatable party that is also an offshoot of these Flemish separatist and collaboration movements, the ‘Nieuw-Vlaamse Alliantie’ (in short N-VA, i.e. The New Flemish Alliance).

They have vigorously advocated amnesty for Nazi collaborators in the past. This party has participated in a Belgian federal coalition government (2015-2018) and now heads a devolution government in Flanders (since 2014). Its influence on the political and intellectual levels is not negligible and has steadfastly been growing since its electoral victories in 2012 and 2018 at the town council levels in Flanders and in 2014 and 2019 at the federal level in Belgium. Gradually, it has also encroached on the media with a relentless campaign of actual serious information as well as semi-truths, generalities and fake sloganeering (“What Flanders does, it does better”; “Belgium is a country going at two different speeds”; “Wallonia is the culture of the hammock”  etc.); and many of their one theme slogans against “the enemy” (e.g. “the Greens and Socialists decide and Flanders will pay!”) in their false simplicity and repetitions are not dissimilar at all to the proved propaganda and popularity methods that Hitler used to his avail, even though, of course, there is no comparison to be made beyond the choice of propaganda methodology.

Moreover, the figure of the historical president of the N-VA, Bart De Wever, is eminently controversial. In November 1997, b rimming with enthusiasm, he wrote a congratulatory note for the ninetieth birthday celebration of a documented Flemish woman collaborator, condemned and imprisoned after the war. The celebration was attended by the cream of the extreme-right party “Vlaams Blok” (condemned by Belgian Justice for racism) and Nazi sympathizers: “Prison life was not pretty but Griet never lost heart. She represented so much for so many people, we hope to be able to enjoy her friendship for a long time.” (“De Opgang” — the Climb — by Stefan Hertmans, page 387).

This is what a well-known Dutch historian Bas Kromphout, wrote about De Wever, who was actually mayor of Antwerp for his second six-year term in office:

“A large part of the party management of the N-VA has a genealogical tree that harks back to the Flemish collaboration (…) After 1944, these collaborators were heavily punished what, to them, was interpreted as a Belgian attack on Flanders. Rapidly, after the war, Flemish nationalism stood up again. (…) De Wever will never radically renounce the past in order not to alienate specific groups…”

More recently, for the twenty-fifth anniversary of the Flemish Parliament, of which the N-VA party retains the majority as well as heads the Flemish government, in cooperation with Newsweek, a special Flemish Parliament features issue was published. In this issue, there is a gallery of known personalities who were at the foundation of the Flemish drive for autonomy, and two of the figures, August Borms and Staf Declercq, were notorious Nazi collaborators (“Het Nieuwsblad” 20-01-2021).

Let me state clearly that no extremist nationalistic Flemish party leaning to amnesty or rehabilitation for Flemish Nazi collaborators is part of the town council of Zedelgem, so the decision to have the monument in honor of the Latvian Legionnaires erected on its soil is all the more baffling. In the past, however,   political figures from more traditional Flemish parties  asked for amnesty for convicted Flemish collaborators.

Yes, in fact, there is common ground between Latvia and Flanders: let us look at the figures of Herberts Cukurs in Latvia and Staf Declercq in Flanders: they still both have a misplaced hero statusin their native countries among some circles. Yes, there are still dark revisionist forces at work in Latvia and Flanders to rewrite history, notwithstanding the tremendous human and material toll exacted by the Nazis and their allies.

When I read the speeches during the unveiling ceremony for the Latvian SS monument here in Belgium, I felt disgust, and above all shame, thinking of both our Flemish maternal grandfathers who courageously fought for four miserable years in rat and lice-infected trenches against the Germans, the forefathers of the Wehrmacht and Waffen SS during World War II, but already with the same occupation and destructive methods.

The only satisfaction I feel when I look at a particular picture of this monument, the one with a dog on a leash and its mistress, is that, given the ugliness and small size of this Beehive, it might serve as a pissing post for dogs. Indeed, this would be the most fitting use I might think of for such a despicable architectural, historical and human tribute to men who were ~Nazi-collaborating criminals engaged in a criminal undertaking and rightfully detained as prisoners of war where they enjoyed all the POW rights the Nazis denied to their millions of victims.

LEV GOLINKIN’S SURVEY OF NAZI MONUMENTS AROUND THE WORLD