Last March 11th, Lithuanian Independence Day, when over a thousand neo-Nazi marchers passed the sign for the government’s Jewish Public Library on the capital’s main boulevard, no member of the library’s staff turned up to oppose the neo-fascists, with even a modest, polite sign of disapproval. The march proceeded with official permits and the participation of several members of parliament identified with the ruling coalition. The Lithuanian Embassy in Washington DC failed to respond to a DC based petition that attracted 2,156 signatories, many from Lithuanian citizens.

The marchers’ preferred symbols included the white armbands worn by the Lithuanian Activist Front and other 1941 fascist groups that unleashed the Holocaust in the country, killing Jews in dozens of locations before the Germans even arrived and set up their administration. The white armband is a particularly painful reminder for today’s dwindling band of local Holocaust survivors.

Just over two months later, the Lithuanian government invested heavily in a ceremonial reburial with full honors of the Nazi puppet prime minister who had signed the protocols confirming Nazi orders for all of Kaunas’s Jews to be incarcerated in a ghetto within four weeks. Earlier this month, the foreign ministry announced a new “Double Genocide” initiative in the European Union in the spirit of the 2008 Prague Declaration.

But alongside these developments, and some say, in a well-oiled effort to deflect attention, there has been considerable investment in “Jewish” (and Litvak identity-hijack) projects that generally exclude the country’s Jewish community, and are often oriented toward foreign institutions, summer programs and visiting scholars, all lubricated with largess. The Vilnius Yiddish Institute was purged with help from an American university program in Judaic studies (Bloomington-Borns). This year’s Summer Literary Seminars (SLS) features a “Jewish Lithuania” program directed by a close relative of the personal assistant of right-wing MEP Vytautas Landsbergis. Both institutions have in the opinion of some observers been instrumentalized to provide legitimacy to the “Jewish” part of the two-track state policy. One of the means to that end, it is thought, entails legitimization of the current incarnation of “Wyman’s library.”

Dedication of the Yiddish Collection at the Vilnius Jewish Library

4 PM on Thursday 2 August 2012 at Gedimino 24/9 (head into the yard of the Little Theatre and then to entrance on your right). More information.

The saga of the library has become a curious case of what is unceremoniously referred to in Vilnius as “The Dead Jew Business.” In fact, the alarm bell was sounded one year ago by the library’s visionary founder and donor, Wyman Brent, whom an American writer has called “the messiah of Vilnius.” But when the messiah relocated to Germany, the cash strapped Lithuanian government nevertheless found close to €200,000 for refurbishment of premises on the capital’s stylish main boulevard for the project. Eyebrows were raised. The Jewish community, uninformed of the decision and barred from the planning stages of the project, expressed its surprise. The library’s grand opening last December featured the nation’s prime minister, as well as protesters who distributed papers with a discussion of transparency and other issues. One group of UK origin residents even set up a website.

The latest Western Jewish entity to be entangled in the Lithuanian government’s Jewish politics is the renowned National Yiddish Book Center, headquartered in Amherst, Massachusetts. While the gift of a collection of Yiddish books cannot be seen to do any harm, the launch event is being hyped as a high profile “Jewish” event in which the NYBC provides de-facto political street-cred in the absence of assurances that the Yiddish books will be used, that the library’s staff will include at least one member of Vilnius’s Jewish community, or that the library’s leaders will desist from trying to sanitize political leaders who have deeply offended the Holocaust survivor community. Already, the Yiddish collection at the Vilnius Yiddish Institute, the core of which was donated in 2001 by Mendy Cahan of Tel Aviv, remains an unused prop for eleven months a year (outside the summer course). During the academic year, the VYI has no Yiddish-qualified (or for that matter, Jewish) members of academic staff.

It is assumed that various “summertime Jewish dignitaries” will be attracted to the library event to give it a Jewish-Yiddish flavor for the benefit of  ongoing PR.

During a number of springtime visits to the library, intending readers were told that the shelves were mostly empty because the bulk of the collection Wyman Brent had donated (comprising some six thousand volumes) would be catalogued “over ten years” and that the books had in fact been randomly shelved last December just for the opening ceremony and the ministers attending. Will they — and the newly shipped Yiddish books — be wheeled out for the August 2nd command performance before being sent to pasture for a decade?

The Vilnius Jewish Public Library is a state-funded institution now part of the state’s PR campaign on Jewish issues. There is growing hope among the survivor community, a group that increasingly includes children and grandchildren of survivors, that the National Yiddish Book Center will come out with a morally unambiguous public statement concerning Lithuania’s legalization of swastikas (recently commented on by the UN), criminalization of the accurate history of the Holocaust, toleration of 1930s style antisemitism, glorification of local Holocaust perpetrators, ceremonial reburial of major collaborators, defamation of Holocaust survivors who joined the anti-Nazi resistance, and pursuit of the Double Genocide campaign in the European Parliament.

An international petition on the subject of memorials to Nazi collaborators in public spaces has been launched by Krystyna Anna Steiger of Montreal. There have been rumors that the NYBC would publicize the petition on its home page to dispel doubts about where it stands nowadays on the heritage of the Yiddish speaking population of Eastern Europe.

The bilingual invitation in circulation follows. For some reason, the organizers of the event, in partnership with the National Yiddish Book Center, have failed to include a Yiddish text for the invitation to the Yiddish Library Dedication. Speculation is mounting in some circles on the intended use of the library and its Yiddish section to inspire targeted South African Litvaks to invest in a local bonanza for politicians, property magnates and architects. Officially called “Fragments” the campaign is informally known as the “Vilna Ghetto Disneyland Theme Park.” 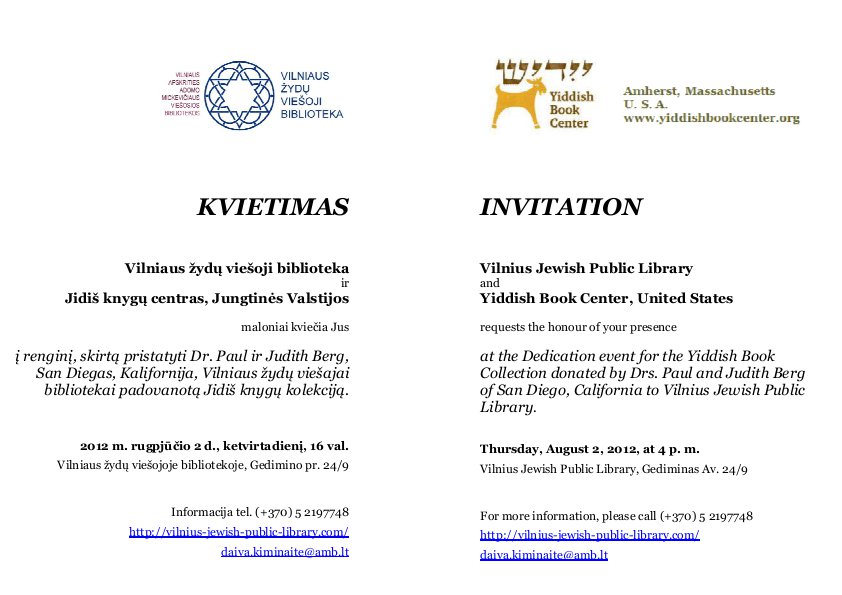 But where’s the Yiddish?

A second public invitation to the event appears on Mr. Brent’s website.