After ‘Hearing Both Sides’ at Trial of March  5th, Vilnius Court Sets Verdict for 27th

Posted on 7 March 2019 by Defending History 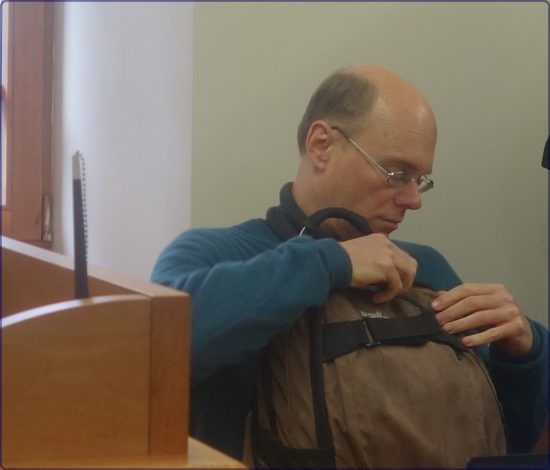 Dr. Andrius Kulikauskas, moments before his historic address before the Vilnius court on state-funded Genocide Center’s policy of glorifying Holocaust collaborators. The center’s “decisions” are cited by high officials as “justification” for street names, university hall plaques and other public-space state-funded glorifications of Holocaust collaborators. Around 96% of Lithuanian Jewry was massacred in the Holocaust.

Andrius Kulikauskas will go down in history not only as the hero of the day but as the true patriot of Lithuania whose love for his country is not infected by Holocaust obfuscation and the glorification of Holocaust perpetrators but by a pursuit of simple historic truth. By contrast, the Genocide Center’s shameful performance illustrated, as ever, why the government should not be using taxpayer or EU funds for a far-right ultranationalist Holocaust-obfuscating entity that disparages the freedom of Lithuanian citizens to have diverse opinions (by dictating fake history as per the Soviet playbook) and continues to damage Lithuania’s name in the world (East European democracies need state glorification of Holocaust collaborators like a hole in the head).

Evaldas Balčiūnas, whose 2012 article brought the case to international attention, was in attendance. Icing on the cake was the Genocide Center’s demand that the videographer leave at the outset. So much for government sponsorship of an open and transparent operation. There were close to 20 observers, mostly Vilnius Jewish personalities there in an individual capacity, including Prof. Pinchos Fridberg, who figured in a New York Times article on the subject last September. Elected Vilnius Jewish Community head Simon Gurevich, committed elsewhere, nevertheless made two brief appearances to show moral support for those who stand up to glorification of collaborators and to the community members in attendance. The VJC hosted Dr. Kulikauskas on Jan 14th.

“It had the air of a 21st century Lithuanian version of America’s Scopes Monkey Trial.”

Background: Run-up to eve of the trial

Proceedings are open to the public (Tuesday March 5th, 10 AM at Vilnius Regional Administrative Court at Žygimantų 2 in central Vilnius). Media to date includes the BBC World Service, Chicago Tribune, JTA. The plaintiff is California wealth advisor Grant Arthur Gochin whose family lost around 100 relatives in the Holocaust in the area where Noreika operated. He will be represented in Vilnius by attorney Rokas Rudzinskas and specialist Dr. Andrius Kulikauskas, author of the Query that launched the case. He has a compelling letter of support from Noreika’s granddaughter, American educator and author Silvia Foti. See Ms. Foti’s remarkable 2018 essay in Salon, and the recent takes by Grant Gochin, Dovid Katz, Andrius Kulikauskas, and Efraim Zuroff.

The case of J. Noreika was brought to the English speaking world in 2012 by journalist and ethicist Evaldas Balčiūnas of Šiauliai (Shavl), Lithuania, as part of a series of articles asking why his government honors alleged Holocaust collaborators. He was “rewarded” with years of prosecutorial and police harassment and kangaroo trials. Please scroll down to May 2014 in DH’s Balčiūnas section. In some opinions, Lithuania is a totally free-speech country with the marked exception of Holocaust history.

UTTER SILENCE FROM THE GOV. FUNDED “RED-BROWN COMMISSION” (ONE OF WHOSE MEMBERS IS ACTIVELY SOLICITING 10,000 EUROS IN CROWDFUNDING FOR NEW BOOK ON LITHUANIAN HOLOCAUST; CROWDFUNDING PAGE)

WILL THE AMERICAN, BRITISH, CANADIAN, FRENCH, GERMAN, IRISH, ISRAELI, NORWEGIAN & SWEDISH EMBASSIES (AMONG OTHERS) AND HUMAN RIGHTS ORGANIZATIONS BE SENDING OBSERVERS TO THE TRIAL ON TUESDAY?