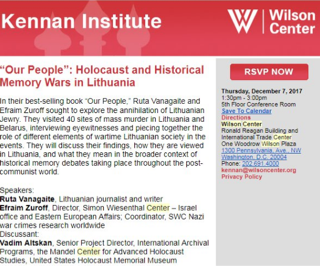 Much of the discussion was as expected, with both Vanagaite and Zuroff discussing the history of Lithuanian collaboration with the Nazis as well as post-independence Lithuania’s difficult odyssey in coming to grips with what their forebears really did. What most struck me though was not something Vanagaite or Zuroff said — as movingly as they spoke — but the two comments that the Lithuanian Ambassador to the US, Rolandas Kriščiūnas, made towards the end of the event. 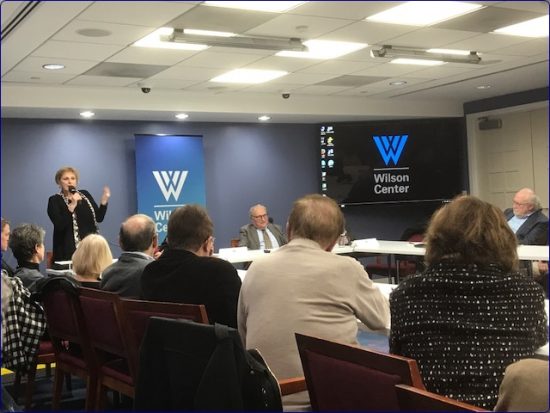 The Lithuanian ambassador’s response to the question of whether he believes Vanagaite was in fact truly a “Putin agent” — a widespread slur used in Lithuania to attack Vanagaite (and many others who disagree with “official truth about the Holocaust”) — was even more astounding. The simplest thing Ambassaodor Kriščiūnas could have done was to reply “No, I am not in full agreement with Ruta on everything, but I don’t think she is an agent of Putin.” Unfortunately, though, the Lithuanian ambassador could not bring himself to say these words, instead hedging and talking about Russian information warfare against Lithuania. He then accused Vanagaite of having appeared on Russian media on a number of occasions, including one time while speaking to a liberal media outlet where she jokingly invited Putin to come take over Lithuania (it was a joke based on Lithuania’s huge loss of young people via emigration to the West; she quipped that you’d need a Soviet-type closure of the borders to keep them all in the country).

Amid much surprised murmuring from the audience at this remark — Did the Lithuanian ambassador really just say that?! — Vanagaite again jumped in to assure the crowd of the obvious point that she is simply determined to write the truth. The notion that the Lithuanian ambassador to the US — his country’s most important ally — genuinely appeared as though he wanted to leave his audience with the impression that a Lithuanian woman, born and resident in Lithuania, who writes her books in Lithuanian, and bravely wrote the truth about the Holocaust is actually an agent of Putin is almost comical, albeit sadly so. Needless to say, it was probably not the finest moment in Lithuanian diplomacy.

Unfortunately, this seems to be a common line not just in Lithuania, but through the former Soviet Union, where those who raise the truth about local collaboration are “parroting the Soviet narrative” or “carrying the water for Putin.” Lithuania has certainly made genuine progress towards confronting the truth. But just as clearly it’s still not fully there yet.

There had been an earlier question about Lithuania’s state project to establish the nation’s national convention center in the middle of the old Vilna Jewish cemetery that dates to the 15th century and is still home to thousands of buried Jewish citizens, even though the Soviets plundered all the gravestones. An international petition has been signed by around 42,000 people, and virtually all Lithuanian-tradition rabbis internationally have condemned the project and pleaded with the government to move the convention center elsewhere. The country’s last official chief rabbi, after penning his own protest in 2015 about the convention center, was rapidly fired. But the ambassador claimed steadfastly that “everything was done in conjunction with an “international Jewish organization” as well as “the local Jewish community.” What he neglected to mention, however, is that the London-based group of Satmar-sect rabbis who gave that “permission” were exposed by Wikileaks for taking payments, as reported by the Jerusalem Post, JTA, and Defending History. The state-sponsored “Jewish community” is in a deep dispute with the recently elected Vilnius Jewish Community, and many of its own members have spoken out about the cemetery, as have numerous Lithuanians. The leaders of the state-enabled and popularly elected communities had a lively debate about the cemetery on Lithuanian radio last summer, after twelve United States congressmen added their voices to those asking for the convention center project to be moved away from the old Jewish cemetery.

Josh Cohen is a contributor to Reuters, Foreign Policy, the Washington Post, and others and has written several articles on the politics of memory in Ukraine.