The video posted on Youtube provides text for the lyrics, to help ensure that nothing is missed. 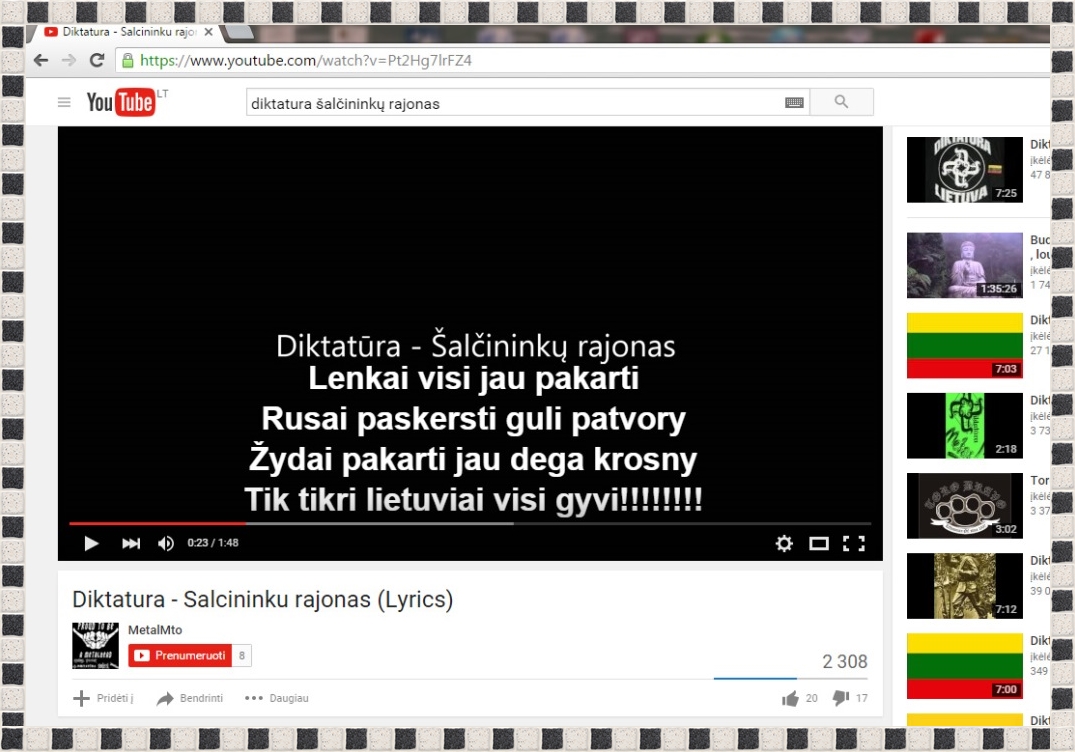 The same day, the prosecutor’s office stated that there is no offense, because of a change in the relevant group’s membership. Indeed, the membership was in fact changing, but the main founder, spiritual leader, and performer remains the same. But that detail had no meaning for law enforcement. The only parliamentary victory was the fact that this and several other hate songs were removed from the internet. But not for long. In September 2015 on Youtube.come the group “Diktatūra” reappeared, with the above-mentioned songs by “Šalčininkai District” and with the racist “In the Dark Night” which effectively calls for the murder of black people.

Members of the “Diktatūra” group are frequently guests of the Association of National Youth Organizations at such events at the neo-Nazi marches on Gedimino Avenue in central Vilnius each year on independence day on March 11th. They are even invited to perform on national television. It seems that neither left nor right wing politicians are able to see a problem with racism-espousing groups being featured in the capital’s center on its most precious national holiday or showcased on national television. 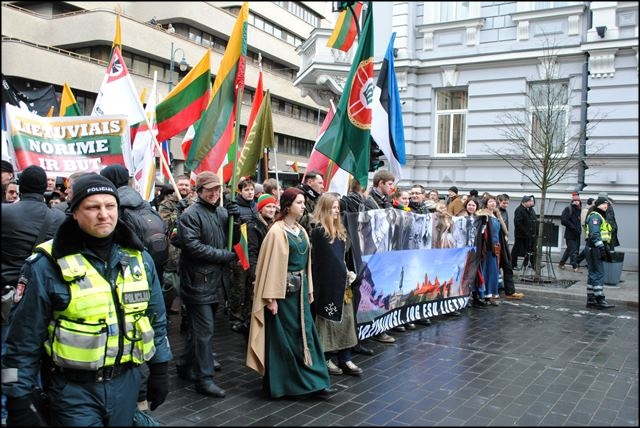 Many people who know better nevertheless do not lift a finger to change anything, because subservience to the brand of populism that we may call pseudo-patriotism is the order of the day. The more so now, when the “patriotic” mood gets stronger by the day. The politicians, diplomats and media figures who represent our country in one way or another find that “fixing” the statistics works well enough to prevent anyone asking if there is something going on not wholly appropriate for the European Union whose values we are meant to share.

That is certainly the situation for the Roma. An outsider might want to just attend a conference or listen to officials talking about national minorities, but one needs just to go to Kirtimai village and see the conditions under which the Roma live to immediately understand more than can be gleaned from any academic conference in swank central Vilnius.

In my previous article, I rejoiced too early to the water being finally turned on in Kirtimai. It was only turned on for a short while, and now yet again disabled people, children and the elderly will be among among many looking at Christmas and New Year’s celebrations without running water. The community is on the edge of a humanitarian tragedy with a life no better than than of actual war refugees in the Middle East. But some of those entrusted to monitor human rights continue with their glossy leaflets and slick websites as if all is well and jolly.

So I turned to the Lithuanian press and radio, but the reactions were the usual support for government statements and pronouncements. But this can be ignored in situations where the people who would drink this water are hated by a certain portion of the electorate.

It seems that our politicians, instead of working to educate those still afflicted with racism and superiorism and to call for a society of equal citizens, are at times more prone to flirt with racist and xenophobic voting blocs for very short-term political profit.

The degree of hatred for Roma in our country is extensive. There is also a lot of prejudice against human rights activists who actually stand up and speak out on issues instead of painting them over with brochures, websites, conferences and other elite events.

In the midst of it all, the growing activities of neo-Nazi youth is increasingly covered up not only by law enforcement but by major politicians as well. That is a cause for concern.