Lithuanian Shtetl Malát (Molėtai) to be Commemorated in 2016

Posted on 23 December 2015 by Defending History

Iam making a documentary film about the Jewish history and legacy of Malát (now Molėtai), a small shtetl in Lithuania. The film will endeavor to cover the history, life and culture of the Maláter, the Jews of Malát, and also the genocide of the entire community carried out by the Nazis and their local collaborators. My father’s family was killed there together with about 1000 Malát Jews.

In addition, we, scions of Malát from Israel, South Africa, Australia and elsewhere, with the assistance of the Jewish community in Lithuania and the Molėtai municipality are planning to organize a march in commemoration of the 75th anniversary of the Malát death march of 1941. It will take place on 29 August 2016.

We would be grateful if all interested parties could spread news of the event in relevant circles and networks. We are also looking for people who may have knowledge of the Maláter Benevolent Association (or Society) that was organized in the United States on 28 May 1905. A Holocaust memorial for the murdered Jews of Malát was erected at Beth David Cemetery in Elmont, New York (we learned from the “Museum of Family History” site).

Thanks to any who can help build our projects of commemoration for the Jews of Malát or who could help us find descendants and relatives of the town’s Jewish people. For additional information please contact me at +972-544-212177. The Facebook page: Molėtai Project. Thank you. 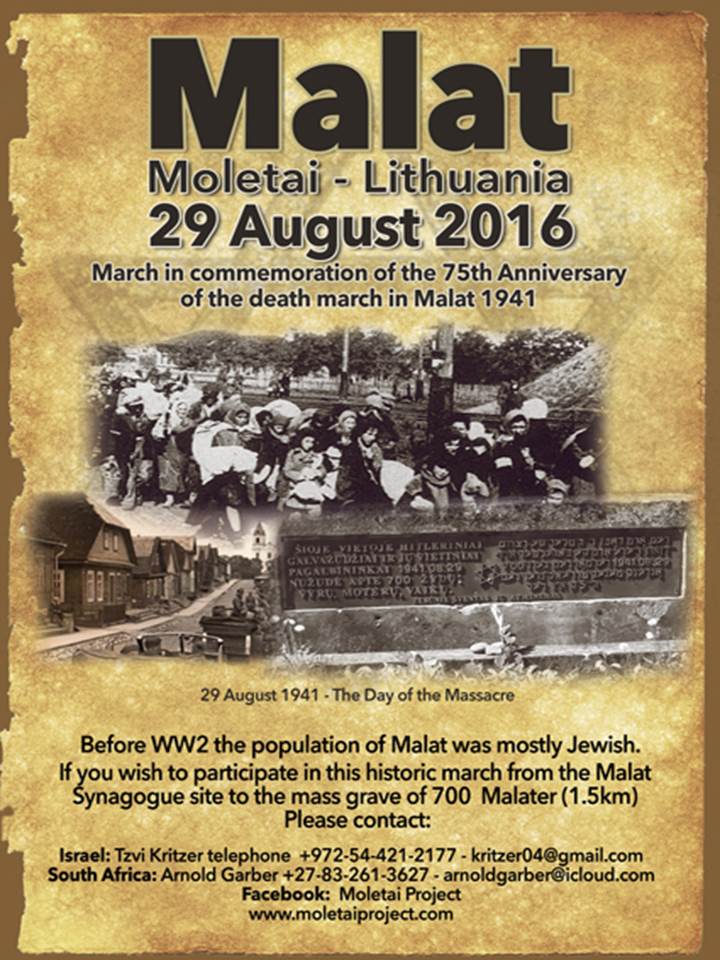