Is Lithuania’s President Distancing Herself from Prime Minister’s “Religious Zeal” for the “Convention Center in the Old Jewish Cemetery”?

Posted on 23 December 2015 by Defending History

NEW YORK—In response to his 20 Nov. 2015 letter that has been described by some who have seen it as “powerful,” New York businessman Berel Fried, an Orthodox Jewish scholar and descendant of many people buried at the old Piramónt Jewish cemetery in Vilnius received a reply this week from the office of Lithuania’s president, Dalia Grybauskaitė. Her reply, dated 18 Dec. 2015, was released today by Mr. Fried’s office in New York City. Mr. Fried has been a frequent visitor to Vilnius and Kaunas for many years and is a celebrated guest reader of the Torah when he visits the Choral Synagogue on Pylimo Street in Vilnius.

Following his earlier letter to the European Union, Mr. Fried participated in a meeting in Washington DC with members of the United States Congress on the subject of plans to desecrate Lithuania’s oldest and most famous Jewish cemetery via a new national convention center. He was accompanied by leading rabbis from New York. The convention center project has drawn massive opposition both internationally and from a variety of members of Lithuania’s small Jewish community. The debate has occasioned a considerable paper trail.

The reply from the head of state’s office, signed by presidential adviser Gaja Šavelė, makes the usual reference to the London-based rabbinic group (that was exposed by the Jerusalem Post and JTA in an earlier Vilnius-based money-for-graveyard-permissions scandal this year), the only rabbis in the world to “approve” the convention center. They have been overruled by all the major Litvak (and non-Litvak) rabbinical groupings in the United States and Israel that have spoken out. Curiously, it also refers to representatives — in the plural — of the Jewish community. This is significant because outside of the titular lay-leader head of the community, professionally the nation’s top citizenship lawyer for foreigners, all the public voices from Lithuanian Jews have expressed a range of emotions including anger, disbelief, betrayal and deep disappointment that their government would do to an old Jewish cemetery what would never be contemplated for a cemetery of Christians or ethnic Lithuanians of half a millennium’s vintage. Protests have come from one of the last Vilna-born Holocaust survivors in Lithuania, the longtime editor of the four-language Jewish community newspaper, the leading professor of urban architecture, the one kosher restaurant’s kashruth supervisor, and the Kaunas (Kovno) Religious Community, among others. When the chief rabbi, of eleven years’ standing published his own protest last August, he was rapidly fired by the community’s lay leader cum private attorney, for — “spreading lies about the Šnipiškės cemetery in Vilnius” (see the intriguing debate that ensued between her views, and those of the leading international scholar of the old Vilna cemetery, important for its implications, on both sides of this debate, for analogous situations in other East European cities).

Beyond these cursory mentions, the letter tells Mr. Fried that the president’s office has “informed the Government of the Republic of Lithuania” which is headed by the prime minister. The measured tone and agreement to take up Mr. Fried’s letter seems to some to stand in contrast to the many public pronouncements on the subject by the office of Prime Minister Algirdas Butkevičius, who has boasted that a hotel and parking lot could be added to the convention center, and that it would be a national symbol to commemorate the 2018 centennial of Lithuania’s 1918 proclamation of independence. Many have found it strange that the prime minster personally welcomed the “agreeable London rabbis” on national television last April (without the courtesy of informing any of the three Vilnius rabbis in town). While visiting Israel last September, he rushed to report back to Vilnius that Prime Minister Netanyahu was (allegedly?) okay with the convention center, rather than to report on the important economic, cultural or strategic cooperation talks underway. The Litvak community is pushing Mr. Netanyahu’s office for clarification in this latest round of Lithuanian-Israeli politics.

Plans for the “convention center in the old Jewish cemetery” included a presumption of thirteen million euros that would be granted by the European Union. After the international scandal broke out, the office of the president of the European Commission, Jean-Claude Juncker, assured the international community that no EU monies would be used for the project. Specialists are making further inquiries to ensure that no “back doors” are used for EU funding.

An image of the letter follows. 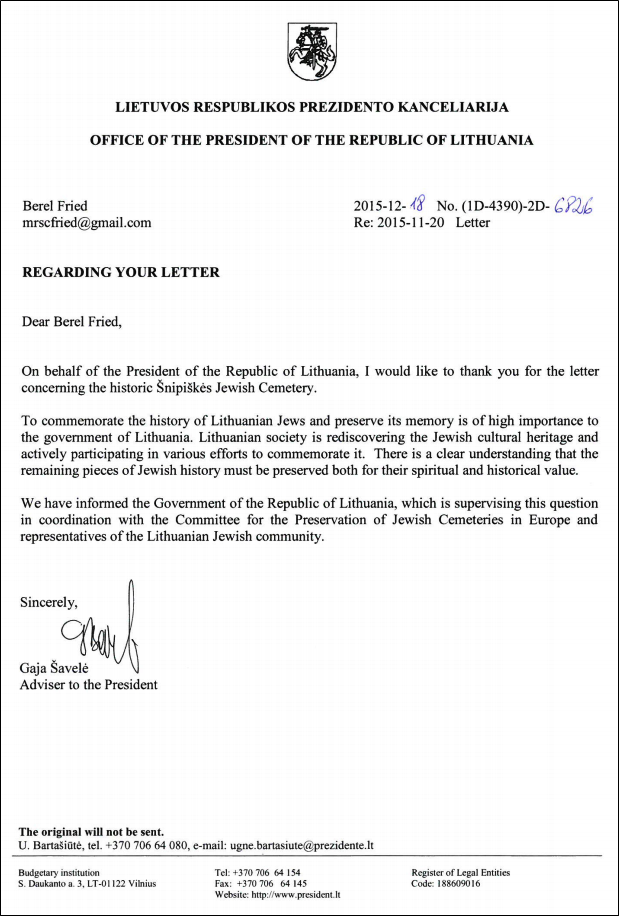