VILNIUS—Didier Bertin, head of a human rights society in France and a longtime member of the Defending History community, has received the following response [appended below] from the office of the president of the European Commission, Jean-Claude Juncker, to his letter of 22 August which had also been published in The Times of Israel. In his statement, conveyed by Chiara Adamo of the Directorate-General for Justice and Consumers, President Juncker distances himself markedly from the controversial project to erect a massive convention center in the heart of Vilnius’s old Jewish cemetery.

The statement makes clear that “Contrary to reports in some Lithuanian newspapers and international media, the planned renovation project at the Vilnius Snipisek cemetery is not supported by European Union funds.” On the face of it, this could mean that the mainstream press reports of EU Structural Funds funding to the tune of 13 million euros for the “convention center in the cemetery”  at Piramónt (Šnipiškės) were not accurate, or that there has now been a change of EU heart in the face of mounting international outrage.

It is in any event a substantial moral victory for the growing coalition of local and international, Jewish and non-Jewish, religious and secular opposition to the desecration plans that have elicited a massive international outcry in a saga that has generated an extensive paper trail over the past half-year. From Lithuania alone, the project has been condemned by the long-time chief rabbi (who was dismissed for his views), a Protestant pastor, a rabbinic scholar of the Gaon of Vilna, a woman specialist on kosher food preparation in Vilnius’s only kosher restaurant, a Holocaust survivor, a professor of building sciences, a Lithuanian philosopher, and various others. One of the most documented responses from abroad has come in the form of a study by  the leading specialist on the history of the cemetery at Piramónt (Šnipiškės), Professor Sidney Leiman of New York City.

At the same time, there are fears, emanating from a previous document, a 13 August 2015 letter from Alice Richard on behalf of the European Commission’s First Vice President Frans Timmermans, that EU Structural Funds provided to the national-level Finance Ministry could possibly still be used for the widely condemned project, enabling the formal stance of “funded by the Finance Ministry, not the EU.” Nevertheless, the moral weight of President Juncker’s position paves the way for overwhelming protest from Western institutions in the event any European Union funds are “morally laundered” into a project that is lamentably antisemitic, for the simple reason that such state-sponsored desecration would never be contemplated for a half-millennium old Christian Lithuanian cemetery at which innumerable cultural heroes of the nation were buried.

Defending History has written to President Juncker to thank him for distancing the EU from the “convention center in the cemetery” travesty, while advising that all vigilance be in force to ensure that EU funds are not ethically abused by the Finance Ministry or any other national-level agency to make their way to the ill-conceived convention-center-in-the-Jewish-cemetery, where thousands would cheer, clap and sing at conventions, drink in the bars and use the washrooms surrounded by thousands of Vilna Jewish graves going back to the late fifteenth century at least.

Defending History has proposed a solution which is also the most frequent to come spontaneously from residents of Vilnius who are asked the “convention center question”: Simply move the convention center project to another site, where all the people of the city and the planet can enjoy it, where it does the city and their people proud in the eyes of the world, now and in generations to come. 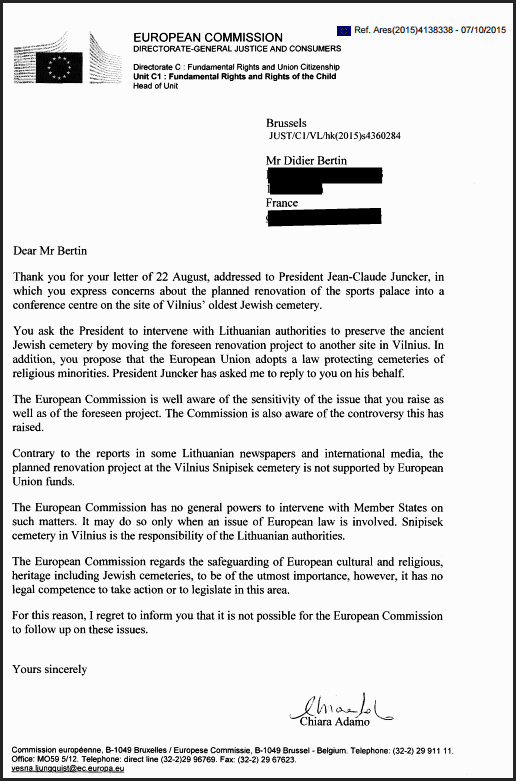