Roma in Lithuania: But What Does the Government Need To Do?

Posted on 16 November 2015 by Defending History

“Which social group in the EU is most generally evicted from housing?” This was the question cheerfully posed by the host of the Good Morning Lithuania show on our national television. The viewer who called in said “Roma” and won a prize.

It can be pleasant to drink morning coffee while tuned to a TV quiz, but this time it was quite something else. The program’s entertaining format and the host’s frequent jokes are not very funny at all when such painful social issues are the subject of entertainment. But the episode well illustrates the public attitude towards the Roma here. Many Roma are still deemed to be distant, exotic and mysterious people, an object rather than a living community. Maybe because there is a lack of empathy and understanding in dealing with Roma integration problems and there are various language issues too.

I recently came across a 1992 clipping from the newspaper Sunday with an article about the Roma. It is a conversation with the Roma representative at the time, Nikolai Kasperovič, who spoke about the problems faced by his community: poverty, exclusion and unemployment. The article describes the parish plans for Kirtimai village: asphalt streets, introduction of electricity, privatization of plots to build a school and a bath house.

Since then, twenty-three years have passed, all in independent Lithuania. Still no asphalted streets, and no electricity. There has been a lot of talk about integration of Roma, but the situation just seems to continue to deteriorate.

Particularly stark is the situation of poverty for women and children.Women’ unemployment is much higher than that of Roma men. Many young men are either in prison or have emigrated, while Roma women, according to tradition, must stay to  take care of their children and grandchildren. Perhaps the hardest life is that of older women who are responsible for large socially vulnerable families. They carry in themselves all the grief and all the fear fear for their children and grandchildren. The Roma community no longer believes in the advent of progress and no longer expects anything. Before every election various party representatives turn up at the Tabor and each time promise a better life. But usually nothing happens. 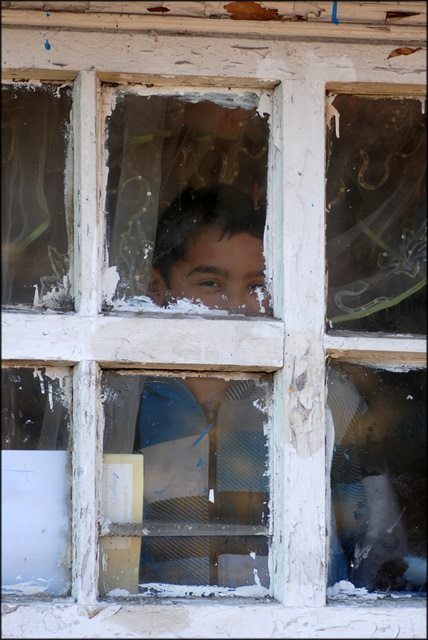 But now, in 2015, the Roma community places great hopes on the new mayor of Vilnius Remigijus Šimašius. There are some positive steps, including the winding down of arbitrary dumps around the upper Tabor. After a hiatus of nearly a year, the water has been turned on again. But these municipal efforts, a step in the right direction, do not suffice.

After the previous mayor’s time in power, his activities and “ghetto slum” demolition campaign resulted in many displaced persons, right here in the capital city of an EU natin. They are are still without a home. In many of the huts, there is no electricity, and the village streets are potholed, muddy swamps.

Earlier this year, the Ministry of Culture approved a plan of action for the integration of the Roma into Lithuanian society in a five-year program for 2015-2020, emphasizing the integration of Roma into the education system, participation in the labor market, improvement of  access to health services, improvement of housing conditions, cultural openness and the reducing of discrimination.

The plan is well drafted and European-sounding but it is difficult to implement. Looking at the rich EU countries, many of our officials just delegate Roma integration issues to non-governmental organizations. The problem is that Lithuania is very poor in effective, politically unafraid and determined NGOs. Not to mention that each individual “project” has its own boxes to check-mark, its short timespan, and its conclusion date.

The goals at hand require long-term direct aid and action in the context of a five to twenty-five year action plan.

Finally, some statistics: According to the 2011 census, 2,115 Roma people lived in Lithuania. Since 1989, the number of Roma in Lithuania is constantly decreasing. A very large part of the Roma community (even 49%) are children and youth under 20 years of age. Only 17.3% of Roma have completed nine or more years of formal education. Around 24% are not covered by the national health insurance program that generally covers the entire population. It is difficult for Roma to be accepted into the labor market. Only 8.7% of Roma have work that includes an employment contract.

But hope dies last. Roma tend to expect and believe they cannot survive without hope and optimism. They quickly forget the wrongs in front of them and try in good faith to look at life in a positive spirit.