In response to the international petition created by Olga Zabludoff asking the Lithuanian government to rescind permits for the March 11th neo-Nazi march in the center of the capital city Vilnius on the nation’s independence day, Lithuanian embassies in various countries yesterday sent their “Jewish lists” a statement dated 24 February 2012 signed by right-wing Jewish MP Emanuelis Zingeris.

The problem is that Mr. Zingeris’s eloquent statement, calling his countrymen to unity, justice and all lofty things on the nation’s independence day, does not mention with one word the actual neo-Nazi march that is the issue at hand.

It is a striking contrast with the unvarnished words from the heart of a simple Jewish resident of Vilnius about the same neo-Nazi march which DefendingHistory.com released, also yesterday, on YouTube. 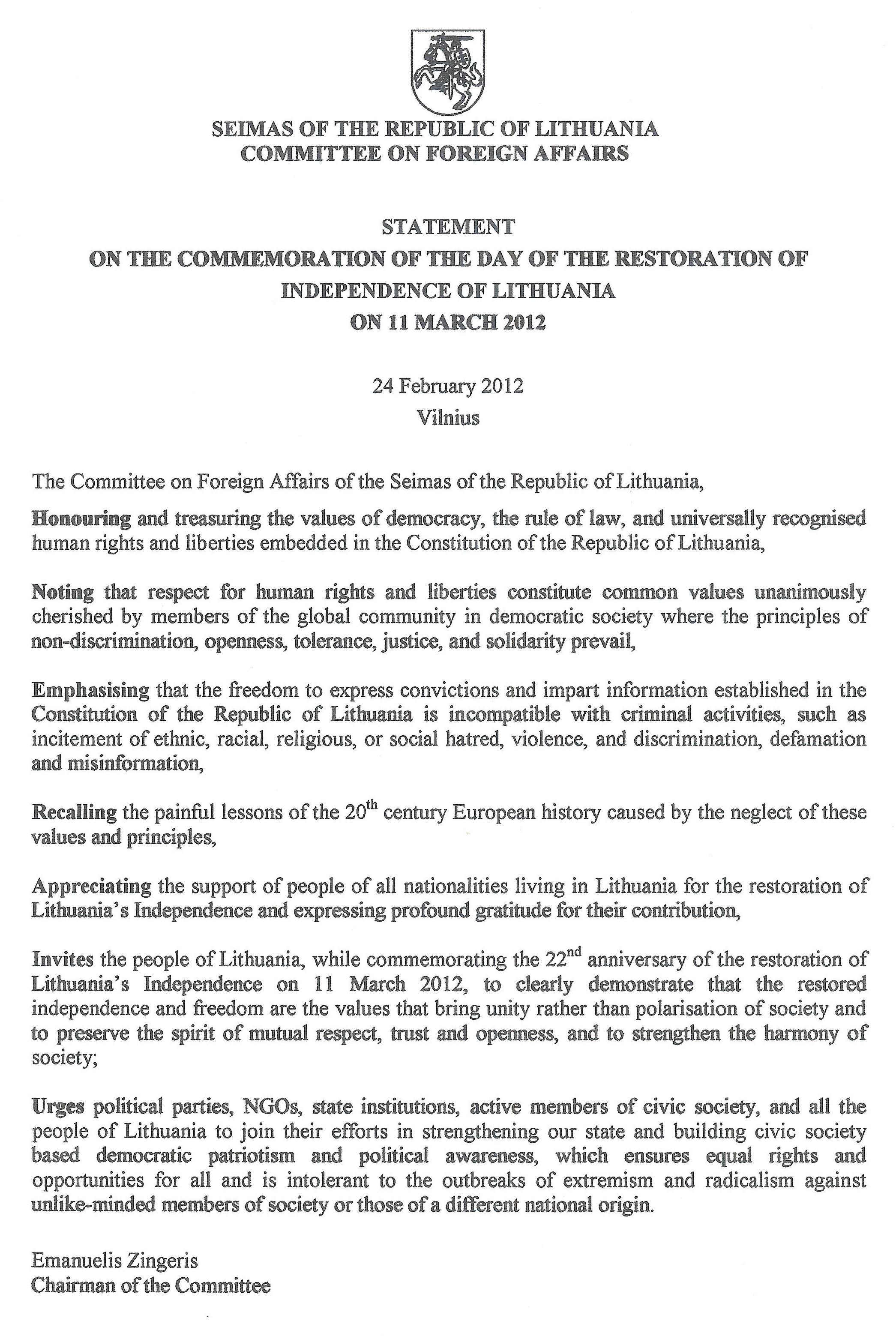 It seemed to observers that yet again, a nationalist Lithuanian government was trying to showcase the sole Jewish member of parliament to work his magic of obfuscation and deflection with respect to state-tolerated antisemitism, projects sympathetic to the Holocaust perpetrators of 1941, and more generally, to the revisionism known as “Double Genocide” (the idea that there were two equal genocides, Nazi and Soviet).

Mr. Zingeris, who resigned from the Jewish Community of Lithuania in 1997, was the only Jew in Europe to sign the 2008 Prague Declaration. For many years, his Jewish background has been used by successive governments not only to cover for antisemitism and Holocaust Obfuscation, but to try at the same time to raise large sums from Jewish and Western sources for tourism and construction projects commemorating the Litvak heritage as a retooled part of a generalized Lithuanian heritage that has nothing to do with today’s living remnant Jewish community, implicitly regarded as illegitimate and unworthy. Time and again, it is members of the Zingeris entourage rather than the actual Jewish community’s representatives who are wheeled out as supposed representatives of the Jewish community of Lithuania at meetings around the world.

Keeping a tight family hold on “the Jewish business” in Lithuania, Mr. Zingeris, a talented philologist, arranged for his elder brother, the eminent author Markas Zingeris, to succeed him as head of the state Jewish museum and its Tolerance Center. The elder Zingeris is also “genocide advisor” to the prime minister, but is known for his silence at state-sponsored conferences that glorify local Holocaust perpetrators.

Both the brothers Zingeris have yet to speak for the record on prosecutors’ campaigns against Holocaust survivors who survived by joining the resistance, on state commemoration of the local Holocaust perpetrators as “rebel heroes” or on those antisemitic outrages that proceed with government permission. On the subject of the publicly defamed Holocaust survivors who became valiant partisans against the Nazis in the forests of Lithuania there is a further disturbing common denominator to the telling public silence. One of the survivors, Dr. Yitzhak Arad, was a founding member of the red-brown commission chaired by Emanuelis Zingeris. Another, Dr. Rachel Margolis, was a founding employee of the Green House (Holocaust museum in Vilnius), part of the Jewish museum directed by Markas Zingeris. Six years after the kangaroo investigation of Dr. Arad was launched, and close to four years after that of Dr. Margolis was announced, there is a veil of total silence over the state effort to turn victims and survivors into perpetrators, even while perpetrators are turned into national heroes.

Yet both have had some success in arranging honors and largess for Jewish personalities from the West, and from Israel, who have wittingly or unwittingly became part of obfuscation and deflection oriented policies.

Within the Lithuanian Foreign Ministry, much of Mr. Zingeris’s power base rests on his ability to “keep the Americans under control” and to prevent the U.S. State Department and embassy from speaking out with unambiguous moral clarity on state tolerated or supported antisemitism, racism, Holocaust obfuscation, and honoring of local Holocaust collaborators. In fact, he and his well-oiled team have rather easily manipulated conferences, grants and awards in recent years to erect a shadow industry of events on the Holocaust and antisemitism that provide adequate cover, not least because they include seemingly uncritical American officials  (e.g. 2010, 2011, 2012). A number of American citizens concerned about the Prague Declaration have received somewhat unusual replies from the US Envoy on Antisemitism explaining that it is truly awful but cannot be opposed publicly because Lithuania’s only Jewish MP signed it. . .

At a recent hearing in Brussels in the European Parliament on issues of Double Genocide, Mr. Zingeris sat cosily between his patron in the Conservative Party, MEP Vytautas Landsbergis, and far-right MP Gintaras Songaila who recently participated in the neo-Nazi march in Kaunas on February 16th.

It cannot be easy to be the right-wing party’s — or his country’s — sole Jewish MP. By issuing a rapid signed statement demanding cancellation of the neo-Nazi march, he would be making a serious first step in the right direction.

By crafting a bold and judicious international petition that has attracted signatures from many hundreds of Lithuanians, Olga Zabludoff of Washington DC has done Lithuania a far greater service than the policies of obfuscation and honoring of naive foreign Jews for cover.

All that remains for a genuine gesture of reconciliation on this issue is for the president and prime minister to say loud and clear:

“As long as I am in office, there will be no neo-Nazi marches on the main boulevard of our capital city on our cherished independence day. Period.”