Posted on 8 May 2021 by Defending History

Yitzhak Arad (originally Rudnitzky), a native of Svintsyán (Švenčionys, Lithuania, some 90 km north of Vilnius) passed away peacefully in Tel Aviv on Thursday. He was laid to rest Friday at Kibbutz Einat near Tel Aviv. His dramatic career included fighting the Nazis as a bold partisan in the forests of Lithuania, fighting with equal heroism in the air and ground forces that won Israel’s war of independence, rising to brigadier general, becoming a major Holocaust scholar and author, serving as director general of Yad Vashem for two decades (1972-1993), and, in the twenty-first century, becoming the first of a series of Holocaust survivors who joined the anti-Nazi resistance to be publicly accused by Lithuanian prosecutors of “war crimes” (with not a shred of evidence) as part of a massive campaign of Holocaust revisionism and inversion emanating from the state and its lavishly sponsored “genocide center” and “red-brown” commission as well and numerous elite operatives in the media, academia and literature.

The Holocaust revisionist who started the campaign against Arad in 2006 (in an infamous interview in the antisemitic Respublika  representing the state’s “Genocide Center“) is today the nation’s Minister of Defense (!). It was, it turned out, the opening salvo in a years’ long saga that came to include Dr. Rachel Margolis (1921-2015), Ms. Fania Brantsovsky (1922- ), and other heroes of the anti-Nazi resistance regarded as “war criminals” by the far-right revisionist history units financed by East European states and their centers, professors, press maestros and operatives on an industrial scale.

Arad was the first Jewish partisan veteran to be libeled (in 2006) by kangaroo prosecutions of Lithuania’s “history fixing” units  in the effort to revise Holocaust history. One major component of the multilayered effort, epitomized by Lithuania’s state-sponsored “Red-Brown Commission” and its Genocide Research Center, has entailed painting Holocaust victims who survived by joining the resistance as perpetrators and perpetrators (particularly of the atrocities of 1941) as victims. Follow the ins-and-outs in Defending History.

In 2012, Dr. Arad reported that Yad Vashem had refused to publish his own paper on Holocaust revisionism in Lithuania (under apparent political pressure “from above”) and asked for it to appear on the pages of Defending History.

Arad was for decades the director of Yad Vashem in Jerusalem. But when the Lithuanian government assault got underway, he felt bitterly betrayed and abandoned by Yad Vashem (and after some early support) by the Israeli Foreign Ministry (and its embassy in Vilnius, which at its lowpoint was persuaded by the very operative who launched the Arad accusations to “get” the Israeli ambassador to pose with a portrait of a major Holocaust perpetrator; at least one Israeli ambassador to the Baltics, the late and lamented Chen Ivri Apter, stood up for dignity and truth). There have been no serious demands of the needed letter of apology  (an ongoing sore point in Lithuanian-Jewish relations, among others) for false charges of war crimes that are in the history books, Wikipedia and more. Such retractions are still doable for posterity to repair the internet and history-book calumnies.

As news of Arad’s death spread in Vilnius today, various vendors of “antiquities and historic objects” vigorously renewed their sale of an antisemitic, Holocaust-revisionist “historic postcard” featuring the neo-Nazis’ charges against the internationally acclaimed Holocaust survivors, partisan veteran, IDF veteran, Yad Vashem director, and scholar, who weathered all storms with his unique stoic and soft-spoken dignity. 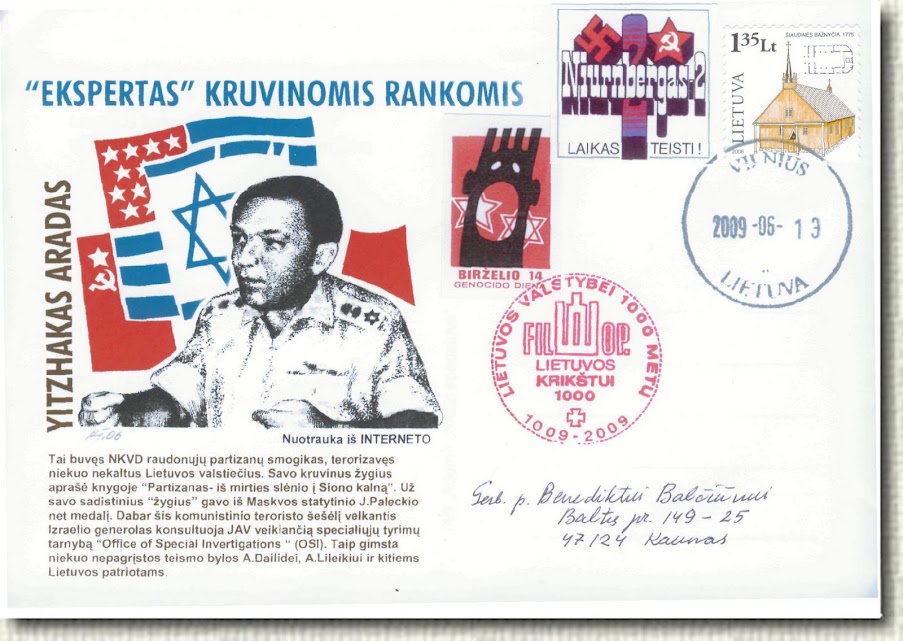 Defending History’s annotated translation of the postcard on sale today:

“EXPERT” WITH BLOOD ON HIS HANDS

[Photo from the INTERNET]

This is a former hitman of the NKVD red partisans, who would terrorize innocent Lithuanian peasants. He depicted his bloody deeds in his book The Partisan: From the Valley of Death to Mount Zion. For his sadistic “feats”, he was even awarded a medal by the Moscow henchman Justas Paleckis[1]. Nowadays, this Israeli general with a shadow of Communist terrorism is a consultant to the US special investigations agency, the “Office of Special Investigations”[2] (OSI). This is the origin of completely baseless court cases against Algimantas Dailidė[3], Aleksandras Lileikis[4] and other Lithuanian patriots.

[2] English in the original.

[3] Algimantas Mykolas Dailidė (1921–2015): official of the Nazi-sponsored Lithuanian Security Police during World War II; convicted by a Lithuanian court for war crimes in 2006 but not sentenced to prison due to old age.

[4] Aleksandras Lileikis (1907–2000): chief of the Lithuanian Security Police in Vilnius during the Nazi occupation; found responsible for deaths of tens of thousands of Jews by a US court and stripped of US citizenship in 1996; charged with the crime of genocide by a Lithuanian court in 1998; died before the court could reach a verdict.