Posted on 20 October 2012 by Defending History 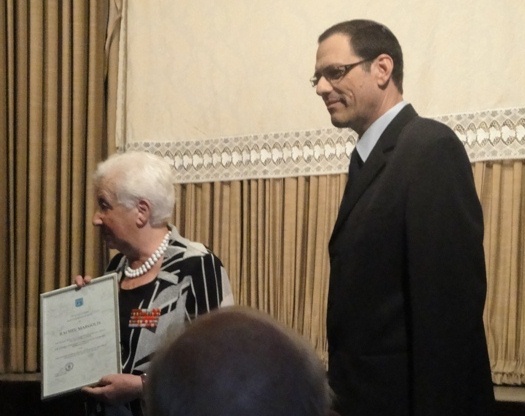 Israel’s Ambassador Chen Ivri Apter presenting Dr. Rachel Margolis with a certificate of merit at Leivick House in Tel Aviv. Dr. Margolis is seen wearing the medals won for her bravery fighting against the Nazis in the forests of Lithuania during the Holocaust. Her entire family perished.

Leivick House, one of Israel’s (and the world’s) last Yiddish-in-Yiddish cultural institutions, has released a video clip of the June 2009 visit to its Dov Hoz Street headquarters in central Tel Aviv by Israel’s then ambassador to Latvia and Lithuania, the late Chen Ivri Apter, at an event to honor Dr. Rachel Margolis. It is posted on YouTube (partial English translation here). The event itself was reported in DefendingHistory and the Leivick House website, among other venues.

Dr. Margolis, due to celebrate her 91st birthday next week, is a Vilna Ghetto survivor and anti-Nazi resistance hero who has been targeted by Lithuanian prosecutors, in effect according to some for “the crime of surviving.” Tributes to Dr. Margolis have come from around the world, including former UK prime minister Gordon Brown in 2011.

Ambassador Ivri Apter died last month at the age of 54 after a long battle with cancer that friends always said he never allowed to cloud his love of life and the day ahead.

His short speech at Leivick House is thought likely to go down in history for its courage and forthrightness at a time when his nation’s foreign policy was noticeably starting to tilt in a contrary direction. The Tel Aviv event was organized jointly by DefendingHistory.com and Leivick House.

In 2006, Lithuanian prosecutors had begun a supposed “war crimes investigation” against Israeli citizen and Holocaust survivor, Dr. Yitzhak Arad, a former director of Yad Vashem for 21 years (1972–1993) and major Holocaust scholar. After being persuaded to join the Lithuanian government’s “red-brown commission” on Nazi and Soviet crimes (albeit with separate “subcomissions”), Dr. Arad was himself accused of “war crimes,” in effect for having survived the Holocaust by joining the anti-Nazi resistance. In 2008, under mounting international pressure, the Lithuanian prosecutors dropped “part” of the investigation in a highly insulting post on their website which appeals to the wider public for “information.” In recent months, with the commission’s reestablishment, local media have missed no opportunity to renew the defamation of Dr. Arad in 2012.

But Arad had become but one of a number of victims of prosecutors’ defamation. In May 2008, they sent police in Vilnius, in what many consider a lowpoint of modern Lithuanian history, to “look for” two other Holocaust survivors who became resistance heroes: Fania Yocheles Brantsovsky of Vilnius, and Dr. Rachel Margolis who had been dividing the year between her native Vilnius and Rechovot, Israel. She has dual Lithuanian and Israeli citizenship. While the Western diplomatic corps in Vilnius, led by the ambassadors of Ireland, the UK, Norway, the United States, France, Austria and other countries, were able to construct a firewall around Ms. Brantsovsky, they could do little for Dr. Margolis who found herself “stuck” at her Rechovot home, unable to this day to pay a last visit to her native Vilna. The UK ambassador organized a letter to her in August 2008 that was signed by nine NATO embassies in Vilnius. The affair represented the first time since the fall of the Soviet Union that Western embassies united to support persons being trashed by the authorities of an East European state.

The plot thickened further when instead of standing up to Lithuania, Israeli foreign policy shifted toward acquiescence in view of wider strategic needs and partnership. That partnership included a sensational vote at UNESCO last year that has been debated in the media.

The movement of events on the ground in Lithuania in one direction, and diplomatic policy in Jerusalem in the other, driven by Israel’s strategic international needs, would have put any diplomat of conscience in a difficult position.

There is wide agreement that Chen Ivri Apter acquitted himself with exceptional honor. Continuing to be loyal to his foreign ministry’s practical agenda of building ties with Lithuania, he would not personally abandon those at the “receiving end” of Lithuania’s foreign ministry. For him it was simple justice to pursue both the diplomatic agenda while acting with honor toward his nation’s Holocaust survivors and those who stood up for them. All the while, Ambassador Ivri Apter politely and firmly stood up for the accurate narrative of the Holocaust.

In June 2009, he made a point of coming to the Tel Aviv event at Leivick House, the video clip of which has just been released. He presented Dr. Margolis with a certificate of merit, and blasted the Double Genocide campaign in his remarks. The event was chaired by Leivick House director Daniel Galay, a well-known Tel Aviv composer and educator.

In 2009, when Lithuanian government agents were helping plot the 2010 disemployment of then Vilnius University professor of Yiddish studies Dovid Katz, now this journal’s editor, Ambassador Ivri Apter issued a letter to the Los Angeles based Friends of the Vilnius Yiddish Institute. He never received a reply. 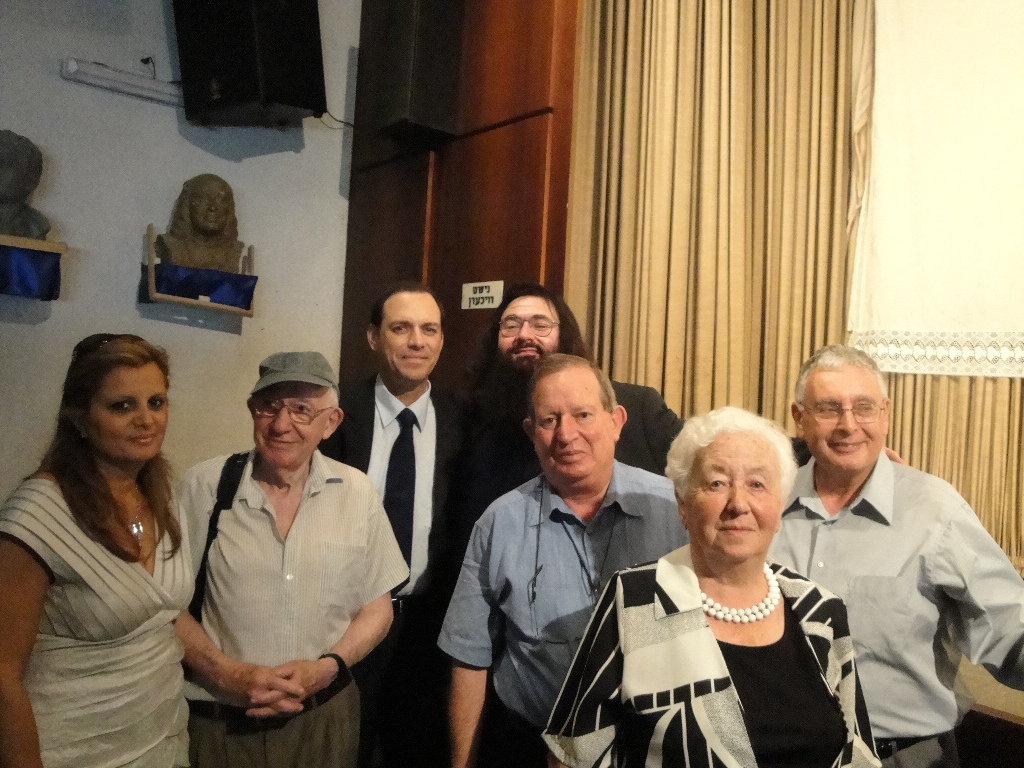 In later years, the state defamation of Israeli citizens, among other Holocaust survivors, continued unabated. In 2011, Joseph Melamed, like Dr. Arad a hero of the 1948 Israeli War of Independence, was visited in Tel Aviv by liaison agents of Interpol over his 1999 book about the Lithuanian Holocaust.

Most recently, a scandal erupted over apparent Israeli government pressure on Yad Vashem to rejoin the red-brown commission. The last association of Holocaust survivors in Israel issued a letter in Hebrew and in English, as well as a statement for posterity. The commission continues to feature on its website the central document of the Double Genocide movement, the 2008 Prague Declaration.

Last month, Israeli-Lithuanian affairs descended into farce with the “jailhouse rock” plaque for the late Menachem Begin affixed to a prison wall in Vilnius.

Survivors interviewed in Lithuania and Israel were shocked by the untimely death of Chen Ivri Apter. They asked variants of the same question: “Who in the Israeli government will speak up now?”

“For us it is self evident that we have to tell the truth, and that our truth is the actual truth. Not only we think so, but the whole free world of the West, Europe, of western Europe, agree to it. They accept the narrative as we understand it.

“But there are some who are determined to understand it differently. There is also an excuse. The half century of Soviet rule — that is not something we take lightly — is being used as some kind of excuse. Some kind of comparison is set up, a mendacious comparison, between this suffering and that suffering. People suffered under Soviet rule. Also Jews, many Jews, suffered, without a doubt.

“It has reached an absurd whereby all of a sudden the Soviet occupation is placed side by side with the Holocaust to the point where they talk about one genocide alongside another genocide. We don’t agree that other genocides in the world are necessarily comparable with the Holocaust. There were many instances of genocide, but they are not comparable to the Holocaust, which was a unique event. And how much more so is the Soviet occupation not comparable, for it cannot it be considered genocide. And all kinds of weird analogies are made: the Arad affair, the affair of the partisans, and the affair of Fania and of Rachel who are ridiculously compared to incomparable things.

“So I will summarize by saying that we in the embassy regard memorialization of the Holocaust as part of our mission, and we are all in fact partners in the effort to memorialize the Holocaust, to transmit it to the next generation in the correct form. To stand up to the nations and to say to them what we believe, and to fear nothing. Therefore today’s event, at which we present a certificate of merit to Rachel Margolis is actually deeply relevant also to all these issues I have spoken about.” 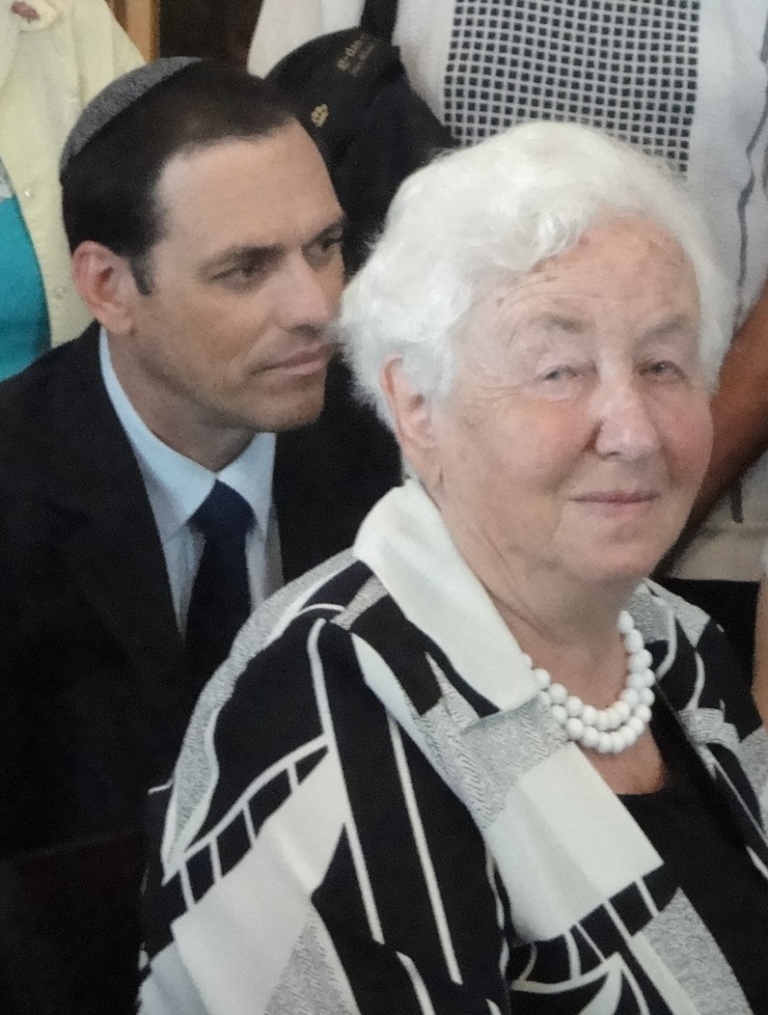