The monumental, though condensed, exhibit, listed as many as possible known Lithuanian Jewish veterans of the war against Hitler, and most prominently those in the Sixteenth Division of the Soviet Army and those who fought in the Lithuanian forests with the anti-Nazi partisans.

For years, young Lithuanian Jews would visit to find the names and pictures of parents and grandparents. Visitors from the around the world marveled at the amount of information shoehorned into one modest room with an exquisite design that synthesized wartime motifs with modernism of the then nascent twenty-first century.

In Lithuania, the exhibit assumes special significance, given the sad campaign over some years to defame and sometimes even to prosecute Jewish war veterans, as part of the wider trend toward “Double Genocide” whose corollaries locally include heroizing Nazi collaborators and defaming their victims.

The team that built the exhibit was led by Holocaust historian and author Joseph Levinson who worked for years collecting the information and photographs. The chief designer was Genrikh Kostanian. Others on the team include Rachel Kostanian, the longtime director of the Green House; the historian and academic advisor of the Jewish Community, Dr. Izraelis (Yisroel) Lempertas (1925-2012); and the late Elijas Levitas (Elye Levit), longtime head of the association of Jewish war veterans; photographer Meir Nomberg who sought out many of the photographs and helped produce the final products for the exhibition.

The speakers at the opening event were Dr. Shimon Alperovich, then head of the Jewish Community of Lithuania, the exhibit’s main compiler Joseph Levinson, and MP Emanuelis Zingeris, then director of the museum. The directorship has since been passed to his older brother, the eminent author Markas Zingeris.

In his speech at the public unveiling in early 2000, community chairperson Dr. Shimon Alperovich noted that three main partners working in harmony — the Jewish Museum, the Council of World War II Veterans, and the Jewish Community of Lithuania — made it happen. He also thanked the Claims Conference for the significant material support that enabled the construction of the exhibit.

But this week, some fourteen years later, this journal’s representatives were told various things by people who work in the building: that the exhibit was permanently removed, that the room is now a “laboratory” manned by an unknown person, that many exhibits are just temporarily closed because of renovations in the building, and that it is not possible to make an appointment to ever see any part of this exhibit even in storage.

Defending History proposes that the exhibit be rapidly set up in alternative premises while renovations are underway. There is ample room, for example, in the same museum’s posh headquarters, the “Tolerance Center” at Naugarduko 10.

Does local tolerance include respect for the Jewish veterans of World War II, among the tiny percent of Lithuanian Jews to survive the Holocaust? If the Vilna Gaon Jewish State Museum of Lithuania doesn’t want it anymore, there are no doubt prestigious foreign institutions that would be honored to house it. And maybe even some right here in Vilnius. 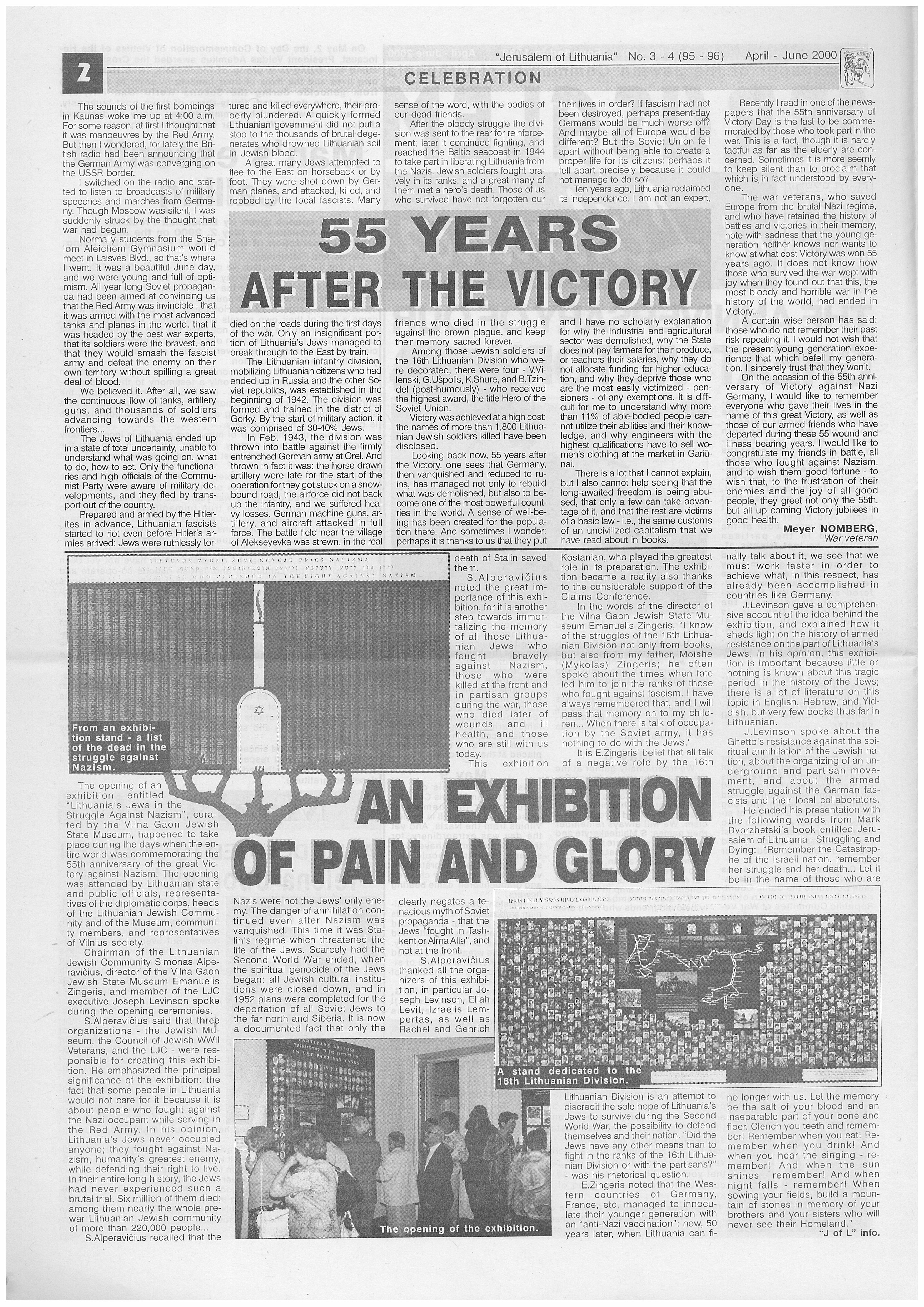