Posted on 11 March 2022 by Defending History

VILNIUS—On our National Independence Day today, the 11th of March, approximately two hundred far-right nationalists and their sympathizers marched in the center of Vilnius, the capital of Lithuania, with permission of the city’s and national authorities. The march, following a route of many years’ standing, started at Cathedral Square and ended up in Lukiškės Square. But this year’s gathering was unusually short, taking up less than one hour. The main outlets of the Lithuanian media covered the event, generally obfuscating its far-right character.

What else makes this year’s march different from the marches of the previous years and from the march on February 16th? First, naturally, support for Ukraine, now under a vicious military campaign by Russian military forces, dominated the event. The rally was opened and closed by playing melodies and singing two national anthems: of Lithuania in Lithuanian and of Ukraine in Ukrainian.

Julius Norwilla’s photos at the event

Second, the provocative far-right slogan “Lietuva Lietuviams!” (Lithuania for Lithuanians!) was today used explicitly, featuring beforehand on the Facebook page banner preceding the event, thereby emphasizing the group’s fear of citizens, residents or refugees who are not pure ethnic Lithuanian (perhaps a contradiction to the professed support of Ukraine?). During the march, it was screamed out repeatedly. Defending History’s  monitoring and reporting of the far-right marches starting back in 2008. Sometimes the far-right slogan, implying illegitimacy or no human rights for non-ethnic-Lithuanians in Lithuania, is at times reduced to a single chant word: “Lithuania! Lithuania! Lithuania!”

Third, the leaders and representatives of the far-right and nationalist parties were absent from today’s event. No ethnocentric speeches, no allusions to Lithuania being deprived of sovereignty as a member of the European Union (i.e. the usual annual fare of anti-EU rhetoric), not even to explain the absence of their own political leaders this year.

The lonely banner of the Nationalist Union (Tautinkų sąjunga), usually the leader of any far right and ultranationalist event, only emphasized the absence of the nationalist political leaders this year.

This year there were also slogans “Слава Україні! Героям слава!” (Glory to Ukraine! Glory to the Heroes! in Ukrainian), and … “Laisvė Lietuvai!” (Freedom for Lithuania!). The catchphrase “Zelensky maladec” (‘Zelensky is a good guy’ or ‘Bravo, Zelensky’) was complemented with swear words against Putin.

The participants carried two banners, one a collage of photos with an inscription in Ukrainian and Lithuanian “For your and our freedom” and overlapping coats of arms of Ukraine and Lithuania as a top layer. The second banner, the Lithuanian ethnocentric iconostasis, with the inscription “I am proud to be Lithuanian” has been seen in the previous years’ manifestations.

The photos from the gathering do show the Lithuanian yellow-green-red tricolors and Ukrainian blue-yellow national bicolors. There were also red and black banners of the pro-Hitler UPA (Українська повстанська армія), that participated in atrocities against Jews and Poles during the Holocaust. 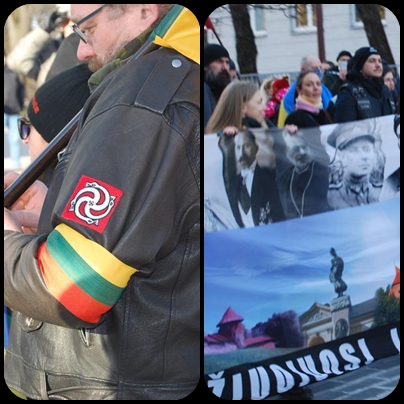 Indeed, those folks  with the red and black UPA banners were the most active. It seemed to observers that they were leading the day’s events. Someone with a mobile phone camera on a stick was running back and forth continuously encouraging the crowd to shout slogans as loudly and as much as possible. There was also memorabilia for sale and a collection for cash in favor of Ukraine’s military resistance organization. The general impression is that this event of this year of 2022 occurred at all mostly due to the international far-right movement rather than the usual brood of Lithuanian nationalists. There was a lone marches with garb glorifying Latvia’s Waffen SS, which fought on the side of Nazi Germany. Over the past year, Belgium took down a statue honoring Latvia’s “Legion” after international efforts in which Defending History played an active role, led by its Belgium correspondent Roland Binet. 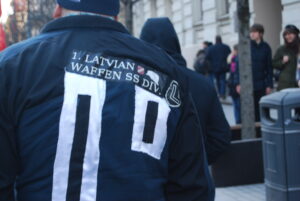 A marcher’s jacket today glorifying Latvia’s Waffen SS division, organized by Nazi Germany, with an oath to Adolf Hitler. For a dozen years, Defending History has been covering the annual March 16 parade in central Riga glorifying the Latvian Waffen SS.

The day of restoration of the Independence of Lithuania is a Lithuanian national holiday celebrated on 11 March in commemoration of the Act of the Reestablishment of the State of Lithuania that the Constituent Assembly signed in 1990. It is one of the three principal national statehood holidays in Lithuania, alongside the Day of the Reestablishment of the Statehood of Lithuania on 16 February (celebrating the 1918 rise of the interwar state, with its de facto capital in Kaunas) and the Statehood Day on 6 July, celebrating King Mindaugas’s coronation in 1253.