The Strange Holocaust Trial in the Lithuanian Capital

Last Tuesday, 5 March 2019, a Vilnius court sat in judgment over an appeal to the state-sponsored “Genocide Center” by Grant Arthur Gochin, a financial advisor in California who is of Litvak heritage and was himself born in South Africa (he did not come in for the trial but was represented by attorney Rokas Rudzinskas and academic specialist Dr. Andrius Kulikauskas). The request in effect asked the Genocide Center (formally “The Genocide and Resistance Research Center of Lithuania” or LGGRTC) to revisit their refusal to re-examine the historical certificate they issued whitewashing Holocaust collaborator Jonas Noreika. In support, the plaintiff submitted a big stack of documents from Lithuania’s own archives, and claimed that the Center’s conclusions ignore or misinterpret a whole series of documents and that they are biased in their justification of Noreika and taking into account only “positive aspects” of his activities. The Center explained away some documents signed by Noreika by using other documents that were signed by the German administration much later, but failed to properly name the criteria according to which some witnesses and documents are deemed important and others are rejected. Gochin’s lawyer noted that responsibility for crimes to humanity is not canceled out by the fact that the perpetrator held office and was following orders. 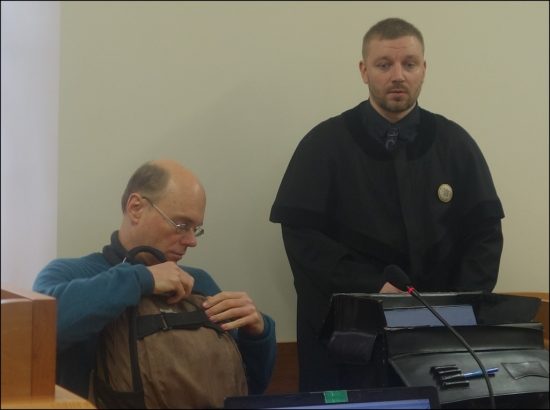 The Genocide Center was represented by two attorneys and three of its well-known staff members: Arūnas Bubnys, Dalius Stancikas, and Alfredas Rukšėnas. The Center’s attorneys tried to argue that the Center’s certificate on Noreika has no direct impact on Gochin’s personal situation or his life. Moreover, they argued that  he should not be suing the Center, but rather the government for its decisions on commemorating Noreika with public plaques, street names and more. All this despite the fact  that for a long time all the relevant state and municipal agencies have tried to “justify” their policy of glorifying Holocaust perpetrators by saying that they just follow the Genocide Center’s conclusions, making for a sad circularity of elite government officials (whether in politics or a state-sponsored institute) in effect proceeding to use state funds to glorify Holocaust collaborators while blaming each other for the decision. 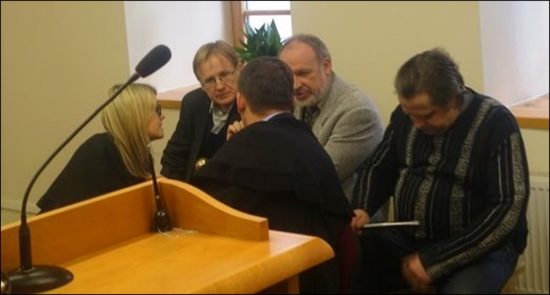 For some reason, the Center did not find it “relevant” that Grant Arthur Gochin’s family lost around one hundred relatives during the Holocaust at the precise time and in the precise area of Noreika’s activities. It was also strange to see the Center’s attorneys argue that the certificate is only an opinion of the Center’s historians. When they were asked whether the Center is a state institution and whether its activities are governed by law, they admitted that was the case. So it turns out that the question if a certificate issued by the Center is a private historian’s opinion or an objective document of a state institution may have two contradictory answers. These were the arguments used by the Center’s lawyers to base their claim that Gochin’s request should not be considered by the court. These arguments seemed even weaker bearing in mind that they were expressed before a court that had already found the formal query worthy of consideration and was already in the middle of a public hearing on the matter. There was a three-judge panel in attendance.

The Center’s historians made a number of arguments. Dr. Bubnys expressed his opinion that historical disputes are not a matter for courts. Mr. Stancikas was interested in the education of Gochin’s researchers (Dr. Kulikauskas and myself) and whether they have degrees in history. In his opinion, the plaintiff, in his quest for the truth, is slandering Lithuania in foreign countries and the research was carried out by people with no qualifications in history. Indeed, Stancikas had to admit that he does not have a degree in history, either, and tried to cover it up by pointing out that his colleagues have been working in the field for many years. Reacting to Kulikauskas’ statement that he spent a year and a half researching Noreika’s activities, Alfredas Rukšėnas claimed that he has dedicated three decades to Holocaust studies.

Both sides mentioned a series of aspects of and documents on Noreika’s activities. For example, Gochin’s representatives pointed out that Noreika signed documents “resettling” Jews to Gruzdžiai and Žagarė and made unilateral decisions on the fate of certain Jewish property. The Center’s specialist Stancikas tried to justify this by bringing up Noreika’s friendship with doctor Jasaitis, who was involved in saving Jews (we have seen no documents proving the existence of this friendship), and witness accounts of how Noreika’s daughter would bring buns to Jews. It all seemed a little surreal: as if someone took the list of the murdered Jews’ property appropriated by Noreika and tried to claim that someone who used so many things belonging to about-to-be-murdered or just-murdered Jews in everyday life “could by no means have been an antisemite.”

The opinions continued to clash and the tension was not alleviated even when Gochin’s attorney clarified the plaintiff’s position: We are not trying to command the Center as to what kind of conclusions on Noreika’s activities they should come up with, we simply want that all available documents related to his participation in war crimes to be taken into account, as well as an explanation of what the criteria, according to which some documents are deemed reliable and important, and others non-reliable and unimportant, are. After hearing about the crimes to humanity committed by people who acted in the name of the Lithuanian nation, Dalius Stancikas resorted, once more, to repeating the view that this was just slander against Lithuania. But it was Jonas Noreika who wrote the antisemitic brochure “Raise Your Head, Lithuanian!” and who was the leader of the LAF (Lithuanian Activist Front) in Samogitia in 1941 and of the delegation of Samogitia to Kaunas. In 1945, he declared himself to be General Vėtra (“storm”), the head of the Lithuanian National Council and the Lithuanian Armed Forces; in short, he acted in the name of the Lithuanian nation and took part in the Holocaust and other war crimes. It is unclear why Stancikas sees the mere statement of these facts as slander.

The position of the Center’s historians became even more dubious when they strictly refused to be videographed in court and insisted the professional videographer leave before the start of proceedings. Were they at some deeper level ashamed of themselves? Was their own collaboration in the sanitization of a Holocaust collaborator something to be ashamed of?  The actual “thing” that is causing grave damage to Lithuania’s name? 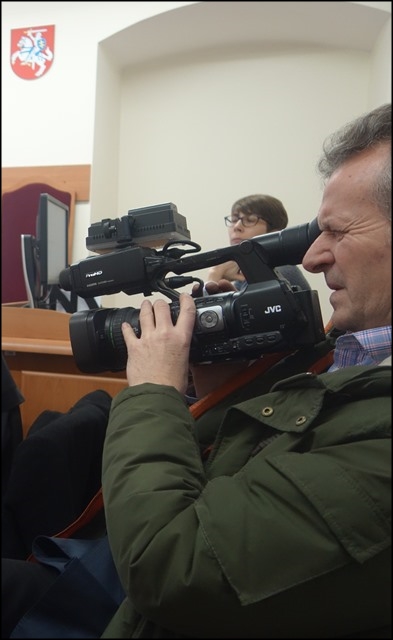 The state-sponsored Genocide Center insisted the videographer leave before the start of the hearing. So much for transparency and pride in the work product.

The hearing lasted the whole day. Gochin’s attorney asked for a longer break to prepare his closing argument, but the court was in a hurry and wanted to be finished with these proceedings the same day. The verdict will be announced on March 27th. Eighty years after the massacre of Jews in Telšiai and Šiauliai counties, the decision will finally be made: to clearly name a collaborator in the murder of thousands of Lithuanian citizens and stop glorifying him in public, or to decide that it is all not important because it does not directly impact the daily life of this plaintiff in California.