A National Gang-Up on our Country’s Leading Playwright

Marius Ivaškevičius is a famous writer, theater and cinema playwright and director who has clearly stated his opinion on the Holocaust more than once. He also contributed substantially to the 2016 Molėtai (Malát) Holocaust remembrance march. He has even criticized the naming of Škirpa Street in central Vilnius after a Nazi collaborator who called for Lithuania’s Jewish citizens to be expelled.

Once the reports that Ivaškevičius was chosen to receive the National Prize for his achievements in literature became public, a public persecution of the writer got underway with rapidity and venom. Far-right groups appealed to the prosecutor’s office not only to stop him getting the prize, but also to start a court case against him, allegedly for violating Criminal Code in his writings, turning him into a potential criminal. The pretext was Ivaškevičius’ novel Žali (The Greens), written sixteen years ago and dedicated to exploring the topic of postwar anti-Soviet resistance. The prosecutor’s office rejected the call and Ivaškevičius received the prize. 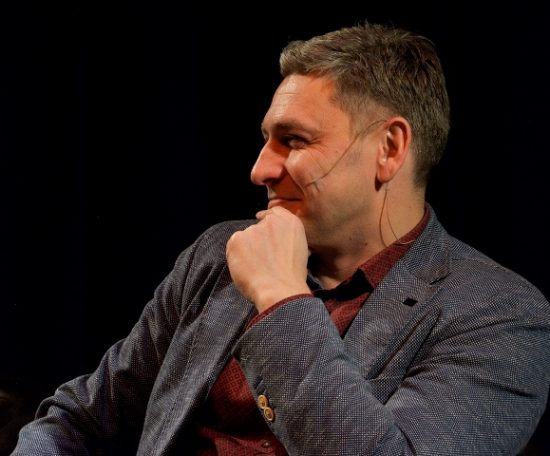 But then, shortly afterwards, another claim was submitted to the prosecutor’s office, this time based on the writer’s statements on national radio. In an interview, he noted that Lithuania needs to transform itself from a country that rejects its citizens to one that accommodates them, and reminded his listeners about the history of the Banished Poles and the Murdered Jews. He was summoned to the police station to explain the meaning of these words. A major public debate started, involving both the democratic forces outraged by the actions of law enforcement, and the far-right “scene”. A wave of internet comments insulting Ivaškevičius and ethnic minorities was unleashed, as well as an anonymous blog inviting readers to submit information on “the enemies of the nation” who are to be punished by death. The invitation was called exactly that: “Death to Ivaškevičius”. The list so far contains only him and Rūta Vanagaitė, but, in my humble opinion, it will grow as time goes by. It seems that the author of this list, going by the name of “The Punisher”, has mental health problems. Moreover,  as exemplified by recent events in Gdańsk, one should not underestimate the possible outcomes of such cases. It is very good news that, with support from member of the parliament (Seimas) Aušra Maldeikienė, an official investigation of the death threats to writers Marius Ivaškevičius and Rūta Vanagaitė was started. I am also glad to share the news that, after public pressure, the second appeal of the ultra-patriots was also rejected by the prosecutor’s office, although it had been the same prosecutor’s office that itself initiated the investigation a while back.

The events are shocking, but not surprising. We have been moving towards this point for years. “Patriotic education” and “ethnic identity”: in contemporary Lithuania, no cultural project is even imaginable without these keywords.

Furthermore, Lithuania declared 2019 the year of authoritarian President Antanas Smetona; of the nationalist President who took power by force in the 1926 coup d’état, replacing democratically elected President Kazys Grinius. I am sure that we would have a completely different historical imagination if the nationalists had not taken power in interwar Lithuania, changing the Lithuanian consciousness in major ways. It is sad to see that, instead of working on correcting these historical mistakes, we are sinking ever deeper. Apparently, commemorating the anniversary of the presidential years of this political figure and building a monument of him is not enough, there is also a desire to recreate the atmosphere of his “velvet dictatorship”.

In this context, attempts at limiting freedom of speech in Lithuania are not accidental. The Seimas started its first workday in 2019 by consideration of the amendments to the Law on the Provision of Information to the Public which would restrict free speech on the topics of Lithuanian history, government, and the situation in the country. This time, we were lucky: after public pressure, the amendments went back to the politicians’ drawers, but, as demonstrated by experience, if certain amendments remain in the drawers, one day, as soon as circumstances allow, they see the daylight again. Thus, the democratically-minded part of the Lithuanian society is forced to remain forever vigilant, lest the tiniest possibility of restrictions to the freedom of speech pass unnoticed.

Although it certainly appears that the persecution of writer Marius Ivaškevičius comes from the ranks of the openly far-right, I am convinced that this process is indirectly supported and influenced by many politicians currently and previously in power; I would like to expand on why that is my view.

On the same day when the neo-Nazi march with the slogan “Lithuania for Lithuanians” was called “a march of patriotic youth” by the authorities, all those who think otherwise were condemned. This happened, if I recall correctly, back in 2013, and, ever since, the  ultranationalist position has been on the rise, gaining more and more influence, political and public support. I hope I am mistaken, but I think that the situation is getting worse.

Most of those who followed the persecution of the writer tried exploring the contents of Žali, analyzing the text, and looking for clues as to why Ivaškevičius was reported to the prosecutor’s office for this novel. Quite soon, when a complaint to the police because of the writer’s interview was filed, everyone could see that the text of the book was not remotely the main issue at hand.

To reiterate: Ivaškevičius’ persecutors cannot be understood by exploring his literary work, because it is not the real reason of this terror: the “problem” is his civic position, the views he has espoused in the public space. Taking some lines from “Žali” out of their context is but a cheap manipulation: it would be naive to expect that the ultra-nationalists would start honestly explaining their ultranationalist attitude towards historical events and their own idols.

I have encountered these spiteful ultranationalists many times. They are the true experts about your work. They observe the twists and turns of your career most diligently, they read what you have written and look at what you have painted, and — they wait. They wait for a pretext to drag you to the prosecutor’s office. When my colleagues and I were tried (according to Article 127 of the Criminal Code, “Defamation of the State Symbols”) for our performance Under Kudirka, or, by the Patriarchs’ Will and Our Desire, in reality it was not a punishment for our performance, as we were neither the first nor the last to do a literary interpretation of the text of the anthem. Before our case, a number of male poets had carried out such experiments and were not subjected to any criminal proceedings. We were being punished for our civic position and our representation of feminism. That is the method: abusing the mechanisms of law enforcement to intimidate, exclude, and silence.

Five years have passed since that trial and I can speak more calmly about that traumatic experience. Yes, going through what activists who are dragged to the prosecutor’s office and tried in court have gone through is a traumatic experience. They are subjected to psychological abuse; those who say otherwise have never had to face something like that. There are good reasons why so many people from my environment, so many activists emigrated or abandoned activism, including myself. To this day, the memories of the visits to police stations and the hateful mob send shivers down my spine.

And you know what hurt me the most back then? My fellow artists’ drivel about how the performance in question, for which my colleagues and I were subjected to a criminal proceeding, was of “poor artistic quality,” that everything that was happening to us was a part of the democratic process, since we did not need to be so impolite towards national symbols, and that the neo-Nazis have feelings, too, as well as the right to appeal to the prosecutor’s office. But the most devastating were the wise old men who said that this trial was beneficial to us and that it was our path to popularity (!) which we cunningly pursued.

We were urged “to admit our mistake and apologize,” because that was supposed to be the only moral way out and the only road to peace. Again, this suggestion came from our colleagues: artists and cultural workers.

From what I saw in the debates on social media, the same wave of criticism and suggestions, word by word, was sent Marius’s way.

A bit more on the method: I would call it a “national gang-up”. The goal and the means to achieve it are the same as in smaller collectives. The forces that want to eliminate unwanted people from their environment gather mediocrities and cowards around them and start psychologically abusing the inconvenient person. Just as in everyday life, the bullying is initiated by uncreative people of lesser capability who are afraid to lose their own position and feel threatened by someone representing another set of values, by someone more talented, better educated, and more proactive, and especially by someone with principles who is not afraid to speak out even when this may harm their career. The bully or bullies start slandering, filing complaints and provoking their prey, making fun of them and trying to win those who are still undecided to their side. Those who have experienced it know exactly what I am talking about.

I am not surprised that most people in the cultural sphere remained passive towards or even supported repressions against artists out of simple fear: fear to be the next victim. Because if you look well and hard enough, you will find evidence against anyone. Especially if you are some sort of an ex-Soviet hack playing a great dissident and fan of democracy at the moment, quick to have the prosecutor’s office do your dirty work for you, as if it was a sanatorium and not an institution of repression.

No, my dear heroes of culture and art, what happened with Marius was not a process of democracy. The democratic discussion and dialogue between ideological opponents ended at the moment when the ultranationalists submitted documents to the prosecutor, started a court case under the Criminal Code, attempted to turn the writer into a convict (which, by the way, amounts to trying to destroy his social status, as the crowd will not remember the reason for the trial and conviction, only the fact that they took place), take his prize away, and label him “defamer of the partisans” and “traitor of the homeland”.

And then there is the election. It is not surprising that both appeals to the prosecutor’s office were submitted by people dabbling in politics, for how easy it is to gather political points by hounding a famous person, especially knowing that this practice is a path to success in our country. Destroying someone, imprisoning them, or at least making fun of them is a highly esteemed activity here. A while ago I checked the biography of the person who reported our performance to the police and saw that this political figure cited the name of that grand accomplishment, “Initiated the famous Anthem case against the feminists who distorted it,” among his proud achievements: taking active part in the Riflemen’s Union, propagating temperance, and gathering signatures for the referendum on forbidding the sale of land to foreigners.

Indeed, persecuting activists and authors has become a way to establish one’s political capital in Lithuania. All we can do is wait and see who will be next.