Posted on 19 December 2011 by Defending History

The campaign to distort World War II history in the direction of East European far-right models and to glorify local Nazi collaborators and perpetrators continues apace.

Bernardinai.lt, usually a bastion of tolerance and resistance against racism and ultranationalism, today published without comment a press release from the Lithuanian Ministry of Defense verbatim, about yesterday’s ministry activities honoring the Nazi-collaborating Lithuanian Activist Front (LAF), on the occasion of an anniversary of the killing of some of its leaders and members by Soviet forces.

The article is here.  A full English translation is here.

These executions by the Soviets occurred prior to the German attack of 22 June 1941 when the LAF unleashed the Lithuanian Holocaust. The specific LAF members honored yesterday did not live to participate in the Holocaust, and this is therefore somewhat different from the many events this year honoring the actual killers from the period starting on 22 June 1941, but it fits in well with the growing campaign to sanitize, heroize and glorify Hitlerist organizations that participated in the genocide of Lithuanian Jewry.

Still, the people being honored were part and parcel of a fascist, Hitlerist, antisemitic, racist organization that was busy making plans for killing as many Jewish citizens of Lithuania as possible, as evidenced by the organization’s prewar leaflets and its subsequent “performance”. Is it appropriate for a NATO country’s Defense Ministry to be honoring a Hitlerist group, with much blood on its hands from the time of the outbreak of the war?

Moreover, the press release from the Ministry of Defense of a NATO member state contains an ultranationalist pseudo-history of the LAF that seeks to whitewash its entire history, including the period of its major early participation in the Lithuanian Holocaust. And of course, the memorial, dedicated to the seventieth anniversary of the events, was scheduled for this month, December, thereby taking in the entire history of 1941. By the end of the year, the majority of the six-hundred year old Lithuanian Jewish community lay in mass graves in the slaughter that had been set in motion in June by the LAF and its partner Hitlerist groups.

The LAF was an anti-Soviet resistance organization that operated in 1940 and 1941. It was the first organization in Lithuanian history to unite people of different views and political persuasions in a common purpose—to restore Lithuanian independence—and planned and carried out the June, 1941, Uprising. The Uprising was begun the first day of the German-Soviet war, on June 22, and lasted a week. The insurgents created the Provisional Government of Lithuania which, on June 23, 1941, proclaimed the restoration of Independent Lithuanian state and made an appeal to the Lithuanian nation over Kaunas radio. The composition of the Provisional Government was also announced. Lithuania was the only one of the countries occupied by the Soviets where an armed uprising took place when the German-Soviet war began.

There is no mention of the pre Nazi invasion LAF leaflets effectively calling for genocide of the Jewish citizens of Lithuania, of the campaign of murder and humiliation the organization went on to carry out by the white-armbanded LAFers in the days from 22 June 1941 prior to arrival of German forces in the course of the ensuing week (historical sources here; video testimonies here). 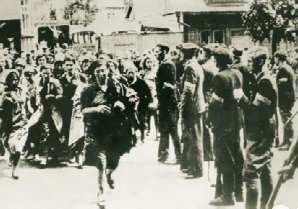 ‘Heroic’ white-armbander ‘partisans’ surround Jewish women in Kaunas en route to collection site for humiliation and murder. Are these really the people the Lithuanian Ministry of Defense should be honoring? Wouldn’t it make more sense to honor the inspirationally courageous Lithuanian citizens who risked everything to save a neighbor from the LAF?

There is no mention of the declarations of loyalty to Adolf Hitler and his goals or the lethal antisemitic agitation of LAF leader Škirpa who is one of the heroes of the Defense Ministry’s press release published by Bernardinai.lt. The Ministry of Defense press release, reproduced as standard history in Bernardinai.lt, admiringly says this about the LAF’s founder:

The LAF was established on November 17, 1940, in Berlin by authorized Lithuanian minister and ambassador to Germany Kazys Škirpa.

Škirpa’s singular “motivational” role for the onset of the Holocaust in Lithuania became more well-known internationally in 2011 due to a single sentence in Yale professor Timothy Snyder’s bestselling Bloodlands: “Škirpa, who returned with the Germans, used this suffering in his radio broadcasts to spur mobs to murder” (p. 192). The LAF’s infamous role in European history also became better known this year thanks to Professor Alexander Prusin The Lands Between (Oxford University Press), which cites the March 1941 circular promising pardons for previous “sins” to people who could prove they had killed “at least one Jew” (p. 158). This is what a NATO Defense Ministry is now honoring!

Amazingly, the ministry’s press release repeats uncommented-upon the implied historical nonsense that the Soviet army fled the “rebellion” of the LAF, with no mention of the “slight detail” that they actually were fleeing Nazi Germany’s invasion of the Soviet Union. There is also the historical nonsense that the (rapidly realized) German vassal Lithuania was or could be in any remote sense “independent”. Had the Nazis won the war, historians agree, there would have been no Lithuania to become independent in 1991.

The policy of turning local Holocaust perpetrators into national heroes is characteristic of the 2011 “Year of Commemoration of the Defense of Freedom and of Great Losses” (text here). Characteristic of the double-game politics in play, prior to being exposed in this journal, the parliament’s Lithuanian language website had only “this” year on its home page, while the English language website had only the concurrently running “other year” — the “Year of Remembrance for the Victims of the Holocaust in Lithuania”.

During 2011, various agencies of the Lithuanian government have been sponsoring a wide array of activities honoring the Lithuanian Activist Front, including a two-day conference in the nation’s parliament (day 1; day 2), and a whitewashing film honored by the speaker of parliament, and subsequently exposed in DefendingHistory.com by Milan Cheronski, longtime editor of the Jewish Community’s newspaper, Jerusalem of Lithuania.

Shockingly for admirers of modern, democratic Lithuania, one of the day’s history-confusing activities ended up being a grave insult to one of Lithuania’s great nineteenth and twentieth century heroes. The schedule of events honoring the LAF included the Genocide Center’s laying flowers at an array of locations in Vilnius, including the grave of Jonas Basanavičius who no doubt turned over in his grave, at the thought that flowers commemorating those who sullied Lithuania’s name more than anything in its long and proud history were being honored at his own grave.

In 1924, Dr. Basanavičius publicly protested the banning of Yiddish signs from town centers in some locations (see Bold Citizens page → 1924).

The sad rewriting-history process now extends to state resources being used to associate genuine heroes with the glorification of Nazi collaborators in a remarkable attempt to whitewash the latter within today’s European Union.