The nation’s president also contributed to the event at Malát. On August 29th, the day of the memory march, President Dalia Grybauskaitė together with Israeli Ambassador Amir Maimon and chairwoman of Lithuanian Jewish community Faina Kukliansky visited the site of the massacre carried 75 years ago in Molėtai and in a semi-public event held a minute’s silence in memory of the Holocaust victims. According to the Jewish tradition, the President, the ambassador and the chairwoman laid pebbles at the mass gravesite memorial stone as a token of remembrance, in a widely disseminated PR photo-op. This took place at least two hours before the actual event and before the event’s participants had begin to gather. The event itself featured as its central activity a memory march culminating at the mass grave site, along with the launch of a new book and exhibition, both prepared by the gallant head of the local museum, Viktorija Kazlienė, who spared no effort and showed much courage. She enlisted the famous Lithuanian plarwright, Marius Ivaškevičius, whose powerful article, “I’m not a Jew” (available now in English) played a pivotral role in bringing large numbers of Lithuanian citizens to the event.

The memory march was a well-organized event for the general public and attracted a lot of national and foreign media attention. The events were attended by many people, certainly more than a thousand (some exaggerated press reports inflated the figure three or forefold). The vast majority came from Vilnius, not from around the country. Commentators and politicians widely described this event as a turning point and breakthrough. However, to genuinely specify without spin how it is actually a breakthrough is more difficult and calls for some new and open discussion.

The first part of the public event took place in the city center, right in the place where there once stood the synagogues of Malát. Seventy-five years ago, at the end of August 1941, the local Jews were commanded by the local police (who had lived with their peaceful neighbors all their lives) to assemble at their shul. They were kept there for several days, humiliatingly locked up in their own house of prayer without food, water or facilities for normal daily human life. On the 29th of August, the local nationalist “white armbanders” and the police took Jews by groups, leading each group through the central street and then killing them at the pre-prepared pit on the outskirts of town.  The approximate number of victims of 29th of August 1941 in Malat is 2,000 Jews (though the Genocide Center in Vilnius tried hard to drive down the number during the monument’s preparation).

At the commemorative event marking the 75th anniversary of the genocide of the town’s majority, the current mayor of the town, Stasys Žvinys, welcomed guests and held an emotional speech, in which he regretted that

“Jews […] have become victims of unfathomable abuse, suffering not only from the fascist regime, but also from local collaborators of that regime. It pains me, as a local citizen to say, that people of Molėtai, who selfishly having sold their conscience and their decency, trampled on all human and Christian values, and joined the satanic operation of murdering innocent people.”

A dramatic historic concession that deserves much credit. What is lacking, nevertheless, is a “touch of reality,” like some characteristic details of how this could possibly happen, who  it was who without the slightest hesitation, decisively and openly organized and conducted the massacre of “their” Jews (their lifelong neighbors), all of them — children, women and men. There was not one Jew rescued with the town (though the day’s events paid proper tribute to the region’s rescuers). There are enough testimonies of the massacre. A dramatic appeal, detached from reality, without naming the people or explaining how the events happened, left for me, at least, a certain frightful emptiness.

And that, in turn, takes me to a major point of concern.

At the beginning of this year, 2016, an initiative got underway within Molėtai (in Jewish history and lore forever Malát), to now, in 2016 or 2017, rename a street in the town to honor one of local Holocaust perpetrators, the priest Jonas Žvinys who allegedly helped assemble the enthusiastic group of killers. This was reported on nationally by Delfi.lt and in Israel by the Jerusalem Post. The local “initiative” to rename the street (now named Darbo gatvė, or Labor St.) was neither publicly supported nor rejected by the town’s leadership, including the mayor, who is a namesake and relative of the perpetrator. Now, after the memory march of August 29th, which attracted so much media attention to the usually sleepy town, this initiative to rename the street is likely to be an embarrassment, and will hopefully be firmly rejected, immediately, to make it clear that the tears for the town’s Jewish population, shed when the world was looking, were sincere.

One of the partners in organizing the Malát events, pianist and Washington Conservatory of Music founder Leon Kaplan, now again resident in his native Vilnius, uttered the words that the other speakers did not utter.

These bold words are spoken not only in the name of his relatives, killed there. These are words said also in the name of Lithuanians. In its own way, his words are a reminder that the victims can no longer speak for themselves. Kaplan’s words mean that there needs to be an honest assessment of the recent as well as of future projects, memorials and marches. The central question is: Will it be made clear that it is morally impossible to honestly commemorate the victims while condoning state-sponsored plaques, street names, university lecture hall names, town square names and more that glorify various of the local collaborators and perpetrators in the genocide of Litvak Jewry? Kaplan’s speech, coming from a proud Lithuanian citizen who decided to leave Washington and resettle in his native Vilnius, can serve as a call to the nation to start focusing on the extant public glorification of Jew-killers up and down the country, including central Vilnius and a lecture hall at Kaunas’s university.

To carry Leon Kaplan’s remarks to their logical conclusion, there is an obvious solution to the street renaming initiative in Malát/Molėtai and the analogous already long-standing street names: To rename each of these for a Lithuanian rescuer, who brought his or her country the greatest possible honor and credit, the light of goodness in the darkest period of evil in human history.

Finally, Mr. Kaplan was the only speaker who directly referred to the book Mūsiškiai (Our People) by Lithuanian author Ruta Vanagaitė and the director of the Simon Wiesenthal Center Jerusalem office, Dr. Efraim Zuroff.  The book, published earlier this year was very professionally presented to the general public. Through this book, especially through the skillfully organized presentations and the author’s interviews, the subject of the massacre of Lithuania’s Jews somehow escaped from the discourse of a limited political, academic, communal and media cocoon where it had been stuck for long, and enabled it to reach some segments of the wider public (Vanagaitė is a famous author of popular and best-selling books in the country on a variety of subjects). For Lithuania, for Lithuanian conscience, that book is a sign of hope that after so many years of intimidation by the Double Genocide industry and its commissions, and the imposed-from-above Double Talk and ambiguous rhetoric, the straight truth is managing to rise up, thanks in broader terms to the work of a variety of deeply dedicated people over these last years.

The book Mūsiškiai, which has attracted much national and international reaction, offers information on more or less known facts. Its most valuable passages by far are Vanagaitė’s testimonies about close family members, and stories about specific items at her parents’ home, like the old family wardrobe or the bracelet. Vanagaitė’s testimonies provide a method for families to engage in a kind of “home education” on their nation’s substantial erstwhile Jewish minority, developing a critical view of the stories and comments that are transmitted from generation to generation in the intimate family environment. This method of developing a narrative of personal conscience is potentially a very important contribution toward rectifying families’ often faulty perceptions of their disappeared Jewish neighbors.

It is now up to the official actors in high places to speak about each massacre specifically, with names of the perpetrators and details of the massacre, and with straightforward words and deeds from local and national government. 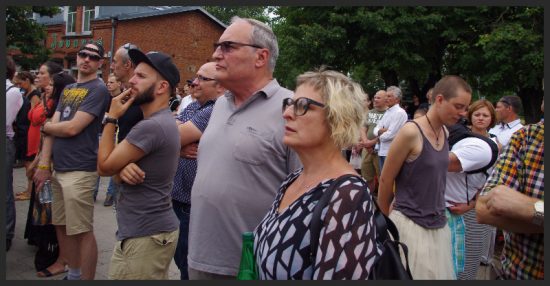