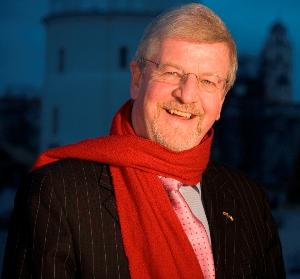 Among those in attendance were United States ambssador HE John Cloud, the new British ambassador, HE Simon Butt, Austrian ambassador HE Andrea Wicke, and a dozen or so other ambassadors and heads of missions in Vilnius. The evening concluded with the assembled together singing the Jewish partisan hymn written by Vilna Ghetto resident Hirsh Glik, Zog nit keynmol az du geyst dem letstn veg (‘Never say you are walking that last road’), led by Fania Yocheles Brantsovsky. Among the guests were visiting American Fulbright scholar, Professor David E. Fishman of the Jewish Theological Seminary of New York, and South African Holocaust survivor and author Shmuel (Mulik) Keren.

Despite a raft of invitations, nobody came from the diplomatic corps of Lithuania, Latvia or Estonia.

The evening at the Irish ambassador’s residence is seen politically in the Baltics as the first defiant event here since Soviet times hosted by a Western embassy to honor  a person being trashed by prosecutors and other authorities of the state. It came less than one month after police came looking for Fania Yocheles Brantsovsky and Dr Rachel Margolis, both heroic veterans of the anti-Nazi partisan resistance in the forests of Lithuania, and recognized as heroes of the free world.