Posted on 1 January 2023 by Defending History

In the decade since Evaldas Balčiūnas began informing the English-speaking world, in a series of articles in Defending History, of the details, scope, and pain of his own country pursuing a state policy of glorifying Holocaust collaborators and perpetrators, the phenomenon has moved from local shadows to the bright lights of open and free debate across the democratic world. His 2012 exposé of Holocaust perpertrator Jonas Noreika ultimately led to the publication in America of a bold new book, The Nazi’s Granddaughter by Sylvia Foti. But back here in Lithuania, Evaldas was lugged into court for years and years on kangaroo charges and harassed extensively. The Defending History team was there at each hearing to provide moral support. The day will surely come when Evaldas Balčiūnas — journalist, educator, rebel, author, and historian — will be honored by Jewish and Holocaust history and remembrance groups internationally, by humanists everywhere, and last but not least, by his own country, as its fearless grand  ethicist of the earlier twenty-first century.

In 2012, when our small Defending History team headed out (as we did each year) to Kaunas to monitor and document the 2012 neo-nazi city center march, an event that glorified Holocaust collaborators, we went for a coffee after the event. There, our mentor who never missed a march before his final illness, Milan Chersonski (1937–2021), the longtime Vilnius Yiddish theatre director and editor for some dozen years of the Lithuanian Jewish community’s quadrilingual newspaper, Jerusalem of Lithuania, told us (in Yiddish, of course): “Look, there is one young Lithuanian who has more courage than the rest of the country combined. He has been writing articles on the tragedy of his country’s government organs glorifying Holocaust collaborators in the public space. And unlike others, he’ll be happy for Defending History to publish them in English translation. Trust me, his articles are more important that all of ours that come from Jewish pens.”

And so began the decade of close cooperation with Evaldas Balčiūnas (EH-val-das bal-TSHOO-nass). One personal recollection of one’s strong feeling experienced many years ago. After about one minute of speaking to Evaldas, I felt that rarefied beautiful soul of the Peaceful Revolutionary, the believer in a cause with undilutable, undiminishable dedication that includes a truly stoic, somehow socratic, readiness to suffer for it, to be ridiculed and accused of all sorts of nonsense and never to waver because your truth is more important than your career (a rare personal set of values in any age). At the same time someone who believes equally in absolutely peaceful dialogue and progress in the course of human history. Indeed, when I heard the word “anarchism” I thought back to the very aged Yiddishist anarchists I had known as a boy in New York City, and those of other peaceful Yiddish movements that thrived before the Holocaust, including Bundism, Territorialism, and a host of varieties of peaceful socialism. Full disclosure: I have never been an adherent of any of these, or any other party-political grouping, but I had from early on the deepest respect for people who took their strictly peacefully expressed beliefs every bit as seriously as the Catholic, Jew or Muslim takes his or hers. And here it was not about the rightness of wrongness of political systems in the abstract. It was about something so much more universal: in short, the past rather than the future. What is the truth of what happened, how horrific that mass murderers are now made into heroes by state organs of my own country, and how I must write the truth so that it be known, and if that’s the end of me so be it. That was my first moment’s assessment of the man.

His first article in DH was “Why does the state commemorate murderers?” His second: “Why I am Translating Rozka Korczak’s Vilna Ghetto Memoir.” The third: “The Posthumous Remaking of a Holocaust Perpetrator in Lithuania: Why is Jonas Noreika a National Hero?“

The rest, as they say, is history. One by one, he began to go through a litany of local Holocaust perpetrators who had streets and schools named for them, and were glorified by state-sponsored shrines including plaques, statues and an endless stream of publications presented as impartial history. The litany included Antanas Baltūsis-Žvejas, Vincas Kaulinis-Miškinis, Konstantinas Liuberskis–Žvainys, Juozas Krikštaponis (Krištaponis) [+ second article), Adolfas Ramanauskas Vanagas, Juozas Šibaila,  Sergijus Staniškis Litas,  Ignas Vylius-Vėlavičius, and  Jonas Žemaitis. Let it be stressed right now: Evaldas did not generally discover any hidden, secret, long-lost documents. He simply studied the facts in the archives open to all other historians at a time and place where most professional historians (with academic positions) decided to skip it or fake it in the interests of a spurious ultranationalist narrative that was being challenged in the mainstream by philosopher Leonidas Donskis, among a very few others.

Some of Evaldas’s trials and tribulations

Then, in March 2014, shortly after his article on A. Ramanauskas, a series of police and prosecutorial harassments inflicted humiliations at workplaces, and primarily, a series of kangaroo court hearings. These are all chronicled in Defending History. Our team will to the end of our days be proud that we attended each and every hearing at Vilnius District Court, almost always led by the Vilnius Jewish community’s late Milan Chersonski, to provide moral support.

Beyond documenting the Holocaust and Nazi collaboration of a series of “national heroes” Evaldas fearlessly took on the state’s powerful history’s establishment series of “fake conferences” (designed to look academic, though always featuring the same glib  state commission member historians and excluding genuinely differing opinions). Most famously, he deconstructed the 2012 conference “United Europe —United History” whose very Orwellian title was the giveaway: If you agree with the Western narrative about the Holocaust and the defeat of Hitler, and disagree with some East European far-right attempts at rewriting that history in the spirit of Double Genocide, you are an enemy of the people (and naturally, it follows that Europe cannot be united if there continues to be diversity of opinion…). Indeed, while Evaldas Balčiūnas, the fearless young Lithuanian author, researcher, peaceful rebel soul of the ages, dissident — and ipso facto his nation’s leading ethicist — was standing up for the simplest of truths, the American Embassy in Vilnius at the time, in a shocking turn of U.S. State Dept. policy, was actually cosponsoring the conference and telling anyone who’d listen that we at Defending History are all Putin lackeys (including the American citizens the embassy is there to protect, not destroy; of course the embassy knew this was nonsense, it was a campaign of personal destruction at the behest of the local red-brown commission and others). The Israeli embassy went further, reaching the veritable lowpoint of modern Israeli diplomatic history, when its hapless ambassador was readily maneuvered into posing with a poster glorifying an alleged Holocaust collaborator (years after Evaldas documented that collaborator’s record). And, it was the era of the first great blossoming of Useful Jewish Idiots, from South African millionaires in Israel to American and British academics, artists, writers — the lot — who sold out the history of the murdered Jews of Lithuania for a pot of lentils in the form of junkets, honors, grants, photo-ops and grand dinners with government bigwigs and other important people (a crescendo was reached in Tel Aviv when the last Litvak Holocaust survivors picketed a banquet honoring a Holocaust-twisting minister which the South African self-glorification society organized). All at the same time as major local participants in the murder of 96.4% of Lithuanian Jewry (not 90% as the UJIs are instructed to parrot) continued to be glorified in the public space with street and building names, plaques and statues, and endless expensively published books and pamphlets.

On the very few occasions when Evaldas’s work did inspire individual foreigners to see the light and reverse their own positions, it even happened that these were wealthy parties bent on the vanity of self-glorification who used (often without credit, sometimes to the point of plagiarism) Evaldas’s courageous publications to buy themselves honor in places where zero courage is needed to decry the glorification of Holocaust perpetrators half way around the world, arranging self-glorifying medals, honors, and films on the way.

But there were also some magnificent results, including Silvia Foti’s book on her grandfather Jonas Noreika, the truth about whom Evaldas Balčiūnas revealed to the English speaking world on the pages of Defending History one decade ago in 2012.

We who deeply love Lithuania (my own primary home for a quarter of a century) continue to live in the hope that the powers that be will remove all the public-space accolades to the murderers and accessories to the murder of Lithuanian Jewry. That is how to fix this, not with more investments in Useful Jewish Idiots to come and accept honors and fun or to pour ever more money into “(mostly Jewless) Jewish addresses in town.” Moreover, anyone dedicated to modern Lithuania and its permanent security is ipso facto dedicated to the European Union’s norms of free speech extending also to critique of state Holocaust revisionism history policy.

Although, to paraphrase Amos, I am neither a prophet nor the son of a prophet, I feel certain that the day will come when Evaldas Balčiūnas will receive the credit he deserves for his writing, in Lithuania and far beyond, as an inspired ethicist, a kind of latter day prophet himself, who fearlessly speaks truth to the powers that be, stoically suffers through the consequences undaunted, and inspires us all to just stand up for what is right, and take whatever it is that comes.

The Defending History community is proud to name Evaldas Balčiūnas 2023 Person of the Year. To mark the occasion, we have asked him to send us an autobiographical essay. His essay “Notes from my Life” appears on these pages. 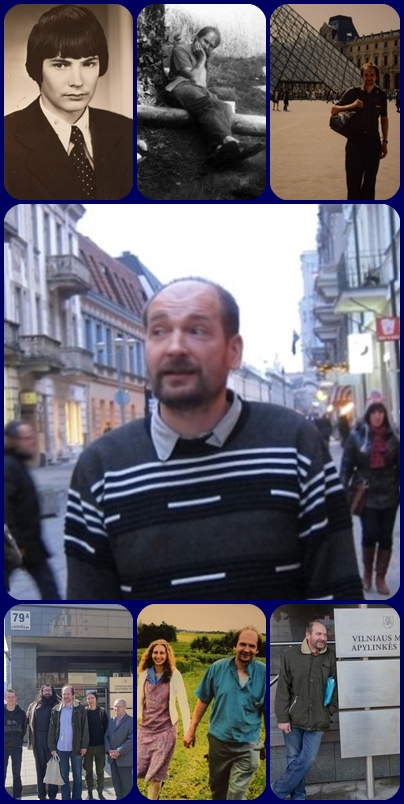