Another “Resistance Hero” or — War Criminal who Selected Jews for Mass Murder?

Konstantinas Liuberskis–Žvainys is a figure with a curious biography.

He was born in Lithuania in the Žagarė rural district on 23 July 1913. In 1930 he graduated from the Žagarė pre-gymnasium. He seems to have been attracted to aviation. In 1932 he matriculated at the cadet training department of the Military Aviation School. He completed the aviation academy in 1934.

He was decorated, strangely enough, by the Soviet government on 28 August 1940, with the “Wings of Steel” medal. 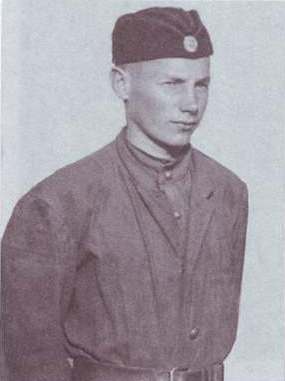 After that his biography becomes hazy. A webpage dedicated to Lithuanian aviation says:

“[He worked] during the German occupation at the Šiauliai Financial Inspector’s office. He was wounded in the leg by shrapnel from a bomb that exploded in Žagarė in 1944. He recuperated at the Russian military hospital. After that he lived in Vilnius and worked at the St. James Hospital. He was recognized there, and moved to Ramoškės village in the Joniškis region to avoid arrest. He did farm work there.

“He was arrested in April of 1950, but on the way to Security in Žagarė, he fled into the Tyrelis Forest near Juodeikiai. There he fell in with the Ąžuolas [partisan] unit of A. Juozapavičius. After swearing his oath, he chose the cryptonym ‘Žvainys’ for himself.”

And again, Žvainys’s biography seems heroic. He was also the publisher of a small partisan newspaper. He was editor and publisher of Partizanų šūviams aidint [“The Shots of Partisans Echoing”] of the Juozapavičius district of the Union of Lithuanian Freedom Fighters from 1952 till 1955. In 1956 he began publishing Partizanų šūvių aidas [“The Echo of the Shots of Partisans”]. 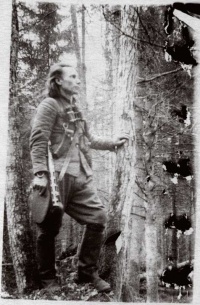 The partisan resistance began to wind down. Once, on 4 September 1955, Žvainys was almost captured after he was allegedly poisoned by the NKVD. He managed to save himself. After an encounter with Soviet militia in 1957, everything goes hazy again, but the story seems no less heroic for that. It seems he continued partisan actions in 1959 in the area around Šakyna and Kruopiai, but actually it’s not really very clear what this armed man did for more than a decade. Nonetheless, the Genocide Research Center in its educational material claims that “the last Lithuanian partisan” Kostas Liuberskis–Žvainys, perished on 2 October 1969, in the Akmenė region.

Today’s Lithuania has high praises for the actions of Kostas Liuberskis.

“Kostas LIUBERSKIS (Žvainys) (posthumously), a partisan of the Resurrection District, underground press publisher, perished in 1969 […] awarded the Commander’s Cross of the Order of the Cross of Vytis…”

Judging from documents on the internet, the search for the mortal remains of this person is a government project.

Pilot, partisan, and newspaper editor. What a beautiful biography.

But his activity at the Šiauliai Financial Inspector’s office during the Nazi occupation strikes a discordant note. What on earth did he do there, that he had to go into hiding after the war?

Here’s what Šiauliai ghetto prisoner Leiba Lipshitz says had to say about the actions of the heroic partisan:

“On  8 September 1941, when both ghettos were already full of people, its territory was sealed off hermetically. It was forbidden to enter or leave without special permission; this was only allowed the columns of laborers. There were practically no Jews left in the city. On Monday, September 8th, a city municipality commission led by Liuberskis and former Šiauliai city people’s education department inspector Liolis checked residents of both ghettos and drew up lists of those who were unable to work and infirm (this commission was formed by order of P. Linkevičius and A. Stankas back when they needed to decide which Jews to imprison in the ghetto and which to imprison in the ‘synagogue,’ i.e., who were being condemned to immediate death).

“On September 11th 1941, a battalion of military police led by German lieutenant Pochalski and an LAF [Lithuanian Activist Front] unit led by general staff member V. Ivanauskas entered the ghetto, and according to the list Liuberskis made, took away about a hundred Jews. They drove them by truck to the Gubernija Forest and shot them there.

“On September 12th 1941, an LAF unit led by the same Ivanauskas entered the ghetto with a list of 300 Jews. Some of the condemned hid, others were driven off and shot in Gubernija Forest.

“On September 15th 1941, the LAF members Liuberskis and Pimpa appeared in the ghetto with a large battalion of Lithuanian police. They checked the documents of all ghetto residents and in place of the blue and pink cards issued yellow ones.”

The same source contains a passage on what happened to the Jews assigned “to the synagogue” by Liuberskis’s committee during the setting up of the ghetto:

“About 2,950 Jews were imprisoned in the Kaukazas ghetto. Since the ghetto at Ežero and Trakų streets proved too small to hold all the remaining Jews of Šiauliai, only about 3,000 people were forced in there. Judenrat representatives began to tread the steps of the city municipality again, asking for some other neighborhood for Jews. P. Linkevičius and A. Stankus promised the Jews the Kalniukas neighborhood in Šiauliai, but on the condition that the Jews who were to move to the Kalniukas ghetto would be temporarily moved to the Village Merchants’ Synagogue (now the Versptas workshop), the Jewish retirement home and the central Choral Synagogue at No. 35 Varpo St.

“This offer was a trick. After they forced the people into these buildings, with about 200 to 300 Jews in each building, they drove them to Luponiai Forest in the Kužiai aldermanship and shot them at the edge of prepared pits. Then another group of 200-300 future victims were selected for [housing in] the now-empty buildings. The shootings lasted for about a month. For several days it rained, and the shooting site became too muddy, so the last 500 Jews were shot at the edge of pits dug for collecting clay at the base of Bubiai Mound in Bubiai village instead.”

Another widely known author, Eliezer Yerushalmy, recounts a narrative similar to Lipshitz’s of the contributions made by Liuperskis toward the mass murder of the city’s Jews.

About nine thousand residents of Šiauliai are buried at two large mass murder sites. According to testimony by honorable people, the commission led by K. Liubarskis sent a portion of them, about a thousand but maybe more, to their deaths. I wonder if that “contribution” was taken into account when Valdas Adamkus awarded this fellow the Commander’s Cross of the Order of the Cross of Vytis.

I also wonder why the Lithuanian Genocide Research Center, pompously presenting him as “the last Lithuanian partisan,” is covering up the works he carried out in Šiauliai during the Nazi occupation.

I understand that Mr. Adamkus is elderly and is not going to take the trip on foot from Šiauliai to the bloody clearings in the Guerija and Luponiai forests in repentance, but the people who worked on his team and who prepared that presidential decree are younger.

I hope that someday some legal body will be empowered to investigate them for demeaning the country’s reputation by this act.