Posted on 15 February 2015 by Defending History

“A splendid opportunity for Baltic leaders to just speak up”

Can Things Be Different This Year?

WILL LITHUANIA’S LEADERS SPEAK OUT AGAINST GRANTING MAJOR CITY CENTERS ON INDEPENDENCE DAYS TO NEO-NAZI MARCHES THAT ADULATE1941 HOLOCAUST COLLABORATORS?

WILL “BAGEL SHOP” AND OTHER FUNDED MONITORS ISSUE A MORALLY CLEAR STATEMENT? A MEMBER OF THE JEWISH COMMUNITY SPEAKS OUT; HIS EARLIER VIDEOTAPED INTERVIEW IN RICHARD BLOOM’S DOCUMENTARY.

Annual marches (since 2008) slated for Kaunas on February 16th and Vilnius on March 11th. For years, one of neo-Nazi march’s main organizers was a high official at the “Genocide Center” …

Last year’s events in Kaunas and Vilnius included swastikas, fascist and white-power symbols and huge banners glorifying the 1941 Nazi puppet prime minister who signed papers confirming the transfer of his city’s Jews to a death camp and ghetto

“BUT THE VAST MAJORITY OF LITHUANIA’S PEOPLE DO NOT WANT CHERISHED NATIONAL INDEPENDENCE DAYS HIJACKED BY THE NEO-NAZIS IN MAJOR CITY CENTERS. A TIME TO SPEAK UP?”

The city’s prestigious university, Vytautas Magnus University, continues tohost a shrine(bas-relief and lecture hall name) to the 1941 Nazi puppet who collaborated in sending his fellow citizens of Jewish ethnicity to a death camp and the Kovno Ghetto. What message does this send to today’s students? To the neo-Nazi marchers who carry banners of the same “hero”? 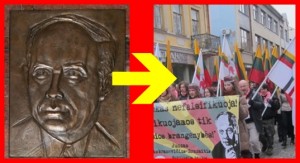 The victims of the Lithuanian Holocaust were also citizens of Lithuania. Does the mayor of Kaunas really want his city center on independence day to be shamed by glorification of the perpetrators and collaborators?

The 95-96% of Lithuanian Jewry murdered in the Holocaust were Lithuanian citizens. Those who lived in the independent Republic of Lithuania celebrated the February 16th independence day with the same love and fervor as their fellow citizens.

Below, a 1928 image of the Jewish community of Darbėnai (Yiddish: Dorbyán) celebrating, with a large sign in Lithuanian and Hebrew (upon which is mounted the national emblem) the tenth anniversary of independence on February 16th. What message does it send in 2015 for a city-center Kaunas march on the day to feature a huge banner glorifying the 1941 Nazi puppet prime minister who signed papers ordering the 30,000 Jews of his city to be incarcerated in a ghetto? What message does it send when national leaders and human-rights NGOs keep silent? 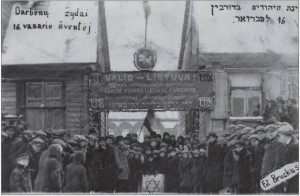