Posted on 13 February 2015 by Defending History

Below, (1) the text of DH’s letter to the mayor of Kaunas on 3 February, (2) the response received from his office on 11 February, (3) our response of the same date, and (4) the response from the mayor’s office received on 13 February and (5) our response of the same date. The correspondence relates to the annual neo-Nazi march planned for 16 February 2015 in central Kaunas. See also section on previous marches, and our 3 February 2015  correspondence with the Kaunas police. Note that a banner featuring a major Kaunas Holocaust collaborator, the Nazi puppet prime minister Juozas Ambrazevicius Brazaitis (reburied with full honors as a hero in Kaunas, in 2012), is depicted in a 2014 photograph used by the march’s organizers to advertise the 2015 event.

I had the honor and pleasure of meeting with you at various memorial events in Kaunas in recent years.

I am writing to you today to ask whether the municipality might this year consider moving the neo-Nazi march away from the center of Kaunas on the 16th of February to avoid doing damage to the great city’s name and causing untold pain and anguish to the remaining families of Holocaust victims and survivors who are equally citizens of Lithuania. Last year’s march featured shouts of “Lithuania for Lithuanians,” swastikas and other fascist symbols, and maybe worst of all, a huge banner of J. Ambrazevicius-Brazaitis who personally signed papers confirming the Nazi orders for Jewish citizens of Kaunas to be sent to the Seventh Fort (for murder) and then for all the rest to be locked up in a ghetto within a month. Surely free speech issues could be resolved by the march being on another day in another place. By licensing it for the center of the great and beautiful city of Kaunas on the cherished independence day of February 16th, the impression is given not only to citizens of Lithuania but to the entire planet that this march, the swastikas and fascist symbols, banner of Brazaitis and chants excluding the legitimacy of citizens of various ethnicities are somehow in keeping with the values of the city’s municipality, which cannot of course be the case.

Thank you so much in anticipation for your time and consideration. 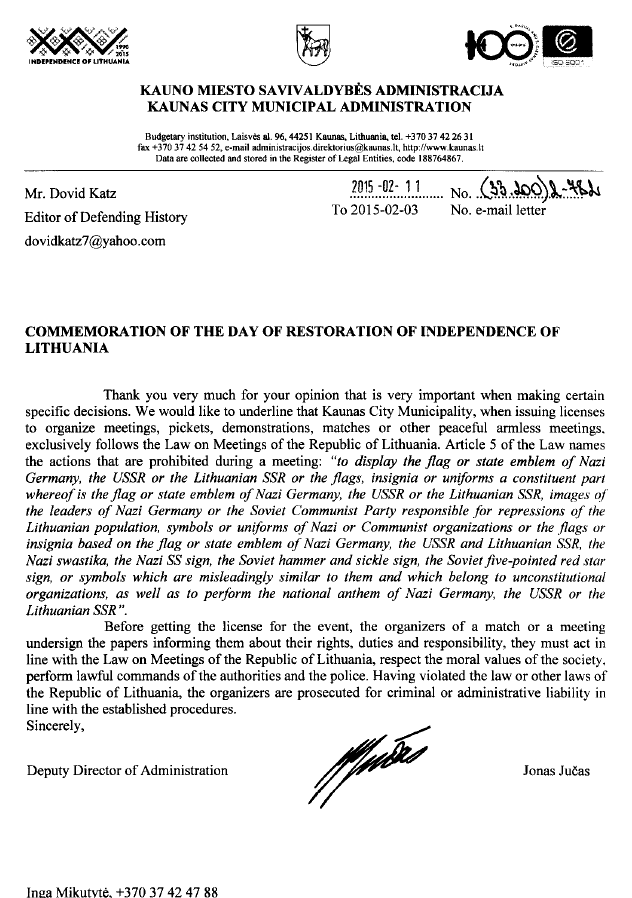 Many thanks for  your attention and your kind explanation, in reply to our earlier letter to the mayor of Kaunas. May your letter be interpreted as a guarantee this year that banners of Juozas Ambrazevicius-Brazaitis and other Hitler collaborators will not be tolerated in the public space and will be removed immediately? That those bearing (or wearing embroidered) swastikas (whether “classic” or “with the extra lines”; whether at the initial, marching-time or concluding events) will be removed immediately? That the same will apply to replacement fascist symbols including the “flaming swastika”? That those chanting slogans universally interpreted by Lithuania’s minorities as an expression of hate, and Aryanist purity demands for their expulsion or annihilation, making clear that only pure ethnic Lithuanians are welcome in this land, will likewise be removed immediately?

It would be so good to know that your letter marks a change of policy to ensure that that magnificent independence day holiday of February 16th, admired by all the free world, will this year not be marred by the neo-Nazi elements whose place is not in the heart of Kaunas on independence day. It would be so good to know that all the peoples of Lithuania will this Monday be able to celebrate together and in harmony the inspiring reestablishment of independent Lithuania in 1918 as a land that cherishes all its peoples.

PS: On J. Ambrazevicius-Brazaitis’s role in the Holocaust, please see, among many other sources:

Thank you for your letter as of February 11. Our reply letter as of February 11, 2015 , No (33.200) R-782 can be interpreted only as the guarantee that the organizers of the match are always introduced to the requirements of the Law on Meetings of the Republic of Lithuania and they undersign their commitments to follow the requirements of this law. Article 11 of Meeting on Law of the Republic of Lithuania regulates the responsibility of the organizers and participants of the event: „If organizers of the events, persons authorized by them and participants or a single person  performing the campaign violate this or any other laws of the Republic of Lithuania, they are prosecuted for criminal and administrative responsibility in the order of established procedures, they are responsible for the material damage made and must cover the loss“.

You may find the entire edition of the Law on Meetings of the Republic of Lithuania here www.lrs.lt

Many thanks for your response. Clearly there is cause for immediate action in view of the fact that the  banner featuring a major Kaunas Holocaust collaborator, the Nazi puppet prime minister Juozas Ambrazevicius Brazaitis is now depicted in a 2014 photograph used by the march’s organizers to advertise the 2015 event scheduled for this coming Monday 16 February. Then there is the consistent history of swastikas and effectively racist chants, all in violation of the law. Surely it would be in the city’s interests for this march to be canceled or moved to another time and place where it cannot mar Lithuania’s internationally cherished and admired February 16th independence day in the very city center of beautiful historic Kaunas.

As usual, the Defending History team, again in partnership with the Simon Wiesenthal Center’s Israel office, will be monitoring the event.

Thank you for your kind attention at each stage. Please let us know if we can be of help in any way.

With all good wishes