The inspiring harmony felt by all during the day seemed to emanate from two distinct factors. One, the speakers were mostly doctors and researchers who had actually spent years studying Tsemakh Shabad (pronounced TSEH-makh sha-BADD) and other illustrious Jewish doctors in the history of Vilna and Lithuanian Jewry. They were all patently in love with their subject, pressed for time, and had to omit many of their findings as their allotted slots were brought to conclusion by the chairperson.

Second, the event was not manipulated or hijacked by any of the political or nationalist factions that are sometimes thought by Holocaust survivors and their families to be taking advantage of events for political motives. The conference presence from Vilnius included nobody from any of the commissions, centers, museums and institutes in town.

In fact, the major Lithuanian government representative at the events was Dr. Vytenis Povilas Andriukaitis, a Social Democratic MP who recently stepped down as the nation’s health minister to take up his post as the new European Commissioner for Health Policy and Food Safety in Brussels, an appointment announced just over a week ago by Jean-Claude Juncker, president of the European Commission. Andriukaitis is a signatory of Lithuania’s historic Declaration of Independence of March 11th 1990.

When the Government is Represented by a Hero of Jewish Causes

Dr. Vytenis Andriukaitis is one of the leading champions of human rights in the country and the region, and in the Baltics that includes Jewish and Holocaust issues in a substantive sense. In 2012, Andriukaitis became the first Lithuanian signatory of the Seventy Years Declaration (SYD), that was then signed by seven more Lithuanian parliamentarians, among the seventy-one European Union parliamentarians who signed on the occasion of the seventieth anniversary of the Wannsee Conference on 20 January 2012. Now available in fifteen European languages, the document is a direct response to the cardinal foundational document of the Double Genocide movement, the 2008 Prague Declaration, that is actively supported by the Lithuanian state’s “red-brown commission.”

Dr. Andriukaitis and his Social Democratic colleagues who signed the Seventy Years Declaration were rapidly trashed in public by the then antisemitic foreign minister who called them stooges of Moscow for so doing, in remarks that included his infamous quip about Hitler and Stalin’s moustache length being the only difference between them.  Andriukaitis replied in an incredibly brave article that remains a major document in the history of the debate. It won rapid praise from Andres Spokoiny in New York, and MP Denis MacShane in the British House of Parliament.

Later in 2012,  the Lithuanian state invested in the reburial with full honors of the 1941 Nazi puppet prime minister, Juozas Ambrazevicius-Brazaitis, who personally signed documents confirming German orders for the Jews of his city, Kaunas, to be sent to a death camp and the remainder to be incarcerated in what became the Kovno Ghetto. Dr. Andriukaitis led the protest with SD colleague Algirdas Sysas. One of the most dramatic scenes of the entire saga, one worthy of the British House of Commons, was Andriukaitis’s debate with foreign minister Ažubalis about the reburial right on the floor of the Seimas. Another near-legendary episode concerned the proud and prompt response offered by Andriukaitis and two other progressive parliamentarians against the coarse death threats made by an official of the far-right Genocide Center in 2012, including his own open letter.

What people in town did not know is that Dr. Andriukaitis, a medical doctor by training, who was born in Soviet exile in Siberia, has spent years studying the life of Tsemakh Shabad, who has been one of his heroes since his days as a medical student in Vilnius who studied with doctors who remembered and frequently talked about the incredible personality, generosity and talents of Shabad. The day started with Andriukaitis, along with Jewish community chairperson Faina Kukliansky, saying words of introduction before unveiling of the trilingual (English-Lithuanian-Yiddish) plaque on the building of the former Jewish Hospital on Kiev Street (Kíyever gas in Yiddish), now a section of the Mykolas Marcinkevičius Hospital on today’s Kauno gatvė. 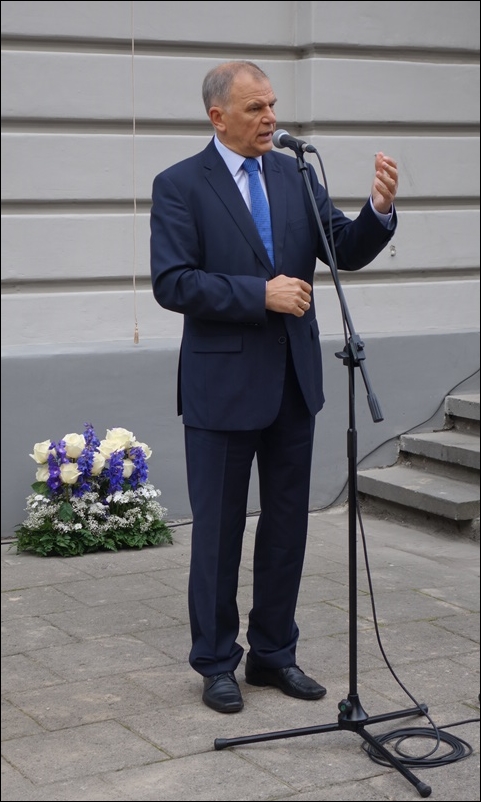 Dr. Vytenis Povilas Andriukaitis, newly appointed Commissioner for Public Health and Food Safety for the European Union, tells the assembled about the life and times of Dr. Tsemakh Shabad. To his left is the cord that would be pulled to unveil the handsome trilingual plaque. 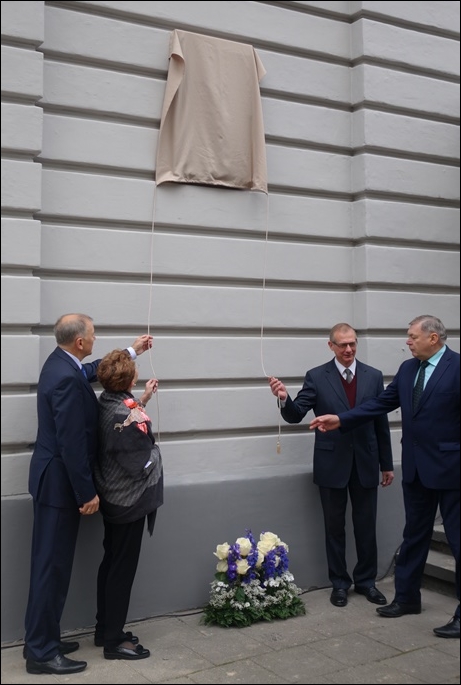 Plaque is unvelied. With Dr. Andriukaitis at left is Faina Kukliansky, chairperson of the Jewish Community of Lithuania. 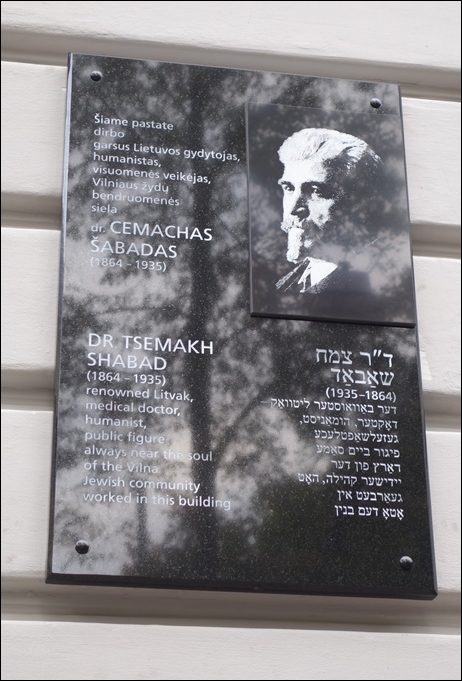 The trilingual plaque (Lithuanian, English and Yiddish) honoring Dr. Tsemakh Shabad at one of the sites in town where he would frequently be found (the prewar Jewish Hospital). The Yiddish text was as usual supplied and coordinated by Defending History in cooperation with the Jewish Culture and Information Center of Vilnius.

The rich conference program, which some felt could have better filled two less compressed days, included a distinguished panel of experts (program here). Dr. Aldona Rainytė gave a meticulous power point slide presentation on the life and times of Tsemakh Shabad in Vilna. Dr. Julius Ptašek spoke about the new volume on medical personnel of the Jerusalem of Lithuania, a book project including both the rich prewar history and the extraordinary narrative of medical care in the Vilna Ghetto. Dr. David Ščiupak spoke on an array of Litvak doctors and their contributions, a theme expanded in the paper by Dr. Ramunas Kondratas, director of Vilnius University Museum, who spoke of Litvak doctors who went on to win Nobel Prizes for medicine, science, or in one case, a peace prize for the championing of a non-nuclear world.  Dr. Vytautas Usonis, head of Vilnius University’s Children’s Hospital, spoke on doctors who risked their lives to save Jews during the Holocaust, focusing on Petras Baublys (on the hundredth anniversary of his birth). The one non-medic on the panel was philosophy professor Dr. Ausra Pažėraitė, who presented a survey of Jewish medicine in Talmudic and Jewish legal sources. 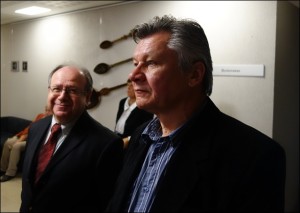 Two of the participants during the coffee break: Professor Leonidas Melnikas (left), head of the Lithuanian Musical Academy and Algimantas Gurevičius, director of the Jewish Cultural and Information Center in Vilnius.

The greetings were also memorable. Dr. Jonathan Brent, director of the Yivo Institute for Jewish Research in New York, emphasized the role of Dr. Shabad in the founding of Yivo, not least by way of acquiring as his son-in-law Yivo cofounder Max Weinreich. Faina Kukliansky, chairperson of the Jewish Community of Lithuania, emphasized both Shabad’s living legend as the doctor who rushed to save children in danger, and as a founding figure in the rise of modern Yiddish schools that would cover the entire curriculum in the Yiddish language, starting with the years of the First World War. She was also the only speaker to mention his political dedication to Jewish Socialism and its various local organizations. She is herself the scion of an old Litvak family of doctors, medics and pharmacists. 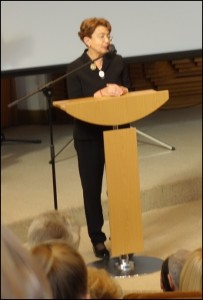 Faina Kukliansky, chairperson of the Jewish Community of Lithuania, told the assembled about Dr. Tsemakh Shabad’s role in the creation of Vilna’s modern secular Yiddish schools, where all subjects were taught in Yiddish, and which rapidly became among the world’s best Yiddish schools.

The Exhibition — and Calendar

Between sessions, the Tsemakh Shabad exhibition was unveiled. It was far too big and intricate to be studied in depth today, and will hopefully have a long life that will extend beyond the parliament building to other venues in Lithuania and internationally. The exhibition was a partnership between Yivo in New York, where Professor Edward Portnoy researched the photographs and original materials in Yivo archives, and the Vilnius Jewish Community’s eminent designer, Victoria Sideraitė-Alon, herself descended from one of the famous Jewish doctors discussed at the conference, Dr. Sheine Sideraitė (1921-2005), after whom the community’s Yiddish Literary Reading Circle is named.

It was during the exhibition interlude that the highlight of the day was enjoyed. Lasting for just a few moments, that was the talk in Yiddish by Fania Yocheles Brantsovsky, translated consecutively by Faina Kukliansky. Brantosvsky, who is 92, is a veteran of Vilna’s Sofia Gurevich school herself, and remembers well Dr. Tsemakh Shabad. She was personally a pupil of Shabad’s wife, Stefanye-Shifre Shabad, and of Shabad’s daughter, Regina Weinreich-Shabad, and had something of meaning to say about all three. On a more somber note, she recalled learning to knit in one of those classes with Regina Shabad, a skill that helped saved her life in the Vilna Ghetto when she was able to have work in the knitting of garments for the Germans.

Red arrow marks out Fania Yocheles Brantsovsky, Vilna ghetto survivor and veteran of the heroic Jewish partisans in the forests of Lithuania, who shared her memories in Yiddish, of Dr. Tsemakh Shabad, and two of her beloved teachers: Shabad’s wife Sefanye-Shifre and his daughter Regina Shabad Weinreich.

A special treat was the gift of an artistic calendar for the Jewish new year produced by the Jewish Community of Lithuania for the new Jewish year 5775 (September 2014 through September 2015), the theme of which is attuned to the conference and exhibition, Jewish medics in Vilna. The community’s long-time deputy chairperson Masha Grodnik (Maša Grodnikienė) explained the many intricate strands that came into play in its production and introduced each person who participated in its production to the audience, including its English language translator and editor, Geoff Vasil of Defending History. The calendar is available from the community.

It is said that every successful conference has at least one surprise not hinted at on the program. Today it was the appearance of Muriel Chochois, a researcher and deputy city manager from Roubaix, northern France, who has devoted many years of passionate personal research into the life of Dr. Roza Shabad-Gawronska. She spoke in French, and was translated consecutively by the Jewish community and Jewish museum scholar Dalia Epstein (Dalija Epšteinaitė). The following day, Ms. Chochois was welcome by the French Embassy in Vilnius. 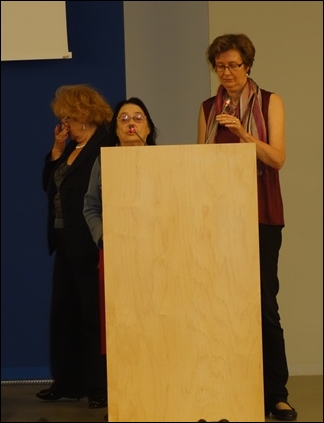 Muriel Chochois (right) adds a touch of French to the conference, speaking about the amazing life of Dr. Roza Shabad-Gawronska. Her remarks were translated by Dalia Epstein (center).