Posted on 11 March 2008 by Defending History 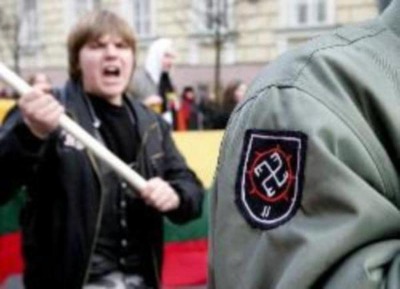 Video clip of the neo-Nazi march on the capital’s central boulevard. The march featured chants of ‘Juden raus’ and a song including ‘Take a stick and kill that little Jew’. Marchers boasted the ‘Lithuanian swastika’ (with added lines). There were also anti-Russian and anti-Polish chants. Second clip comprising the somber, dignified response of the chairman of the Jewish Community of Lithuania plus more material from the march, including the apparent amusement of onlooking police.

These videos appear thanks to the bold Lietuvos rytas journalist Lukas Pileckas. Photo by Vidmantas Balkunas. Leading politicians failed to condemn the march for over a week, when foreign pressures forced statements.

[Update of 20 March 2008: The Jerusalem Post today published a report on the protest lodged by Dr. Efraim Zuroff, director of the Simon Wiesenthal Center’s Israel office, with the Lithuanian ambassador in Israel. PDF here.]