This year, it seemed as if the highest figures in Latvian politics had abandoned any semblance of disassociating themselves from the internationally discredited annual event that does palpable harm to Latvia’s international standing, and particularly within the European Union and NATO communities.

The Latvian president told the world that he believed people should “bow their heads” in respect to his country’s Nazi-established Waffen SS. And then, the Latvian ambassador to the United Kingdom wrote a curiously detailed letter to anti-march campaigner Monica Lowenberg, whose petition against the march amassed over six thousand signatures by today.

Less then a month before the march, the Council of Europe’s commission on racism and intolerance  released its report condemning the Waffen SS marches as incompatible with European values. To some outside observers it had seemed that this alone this year tipped the balance, invalidating the argument that if a group of pro-Nazi combatants, who had sworn an oath to Adolf Hitler and fought for Nazi Germany did not necessarily comprise war criminals, it was therefore appropriate for a European Union and NATO country to glorify that group in a state-sanctioned center-of-the-capital-city ceremony blessed by the leaders of the land.

Denis MacShane in the New Statesman

The positioning of police relative to the entirely peaceful anti-Nazi demonstrators seemed at times startling today. The only acts of forcefulness came from the event’s organizers and the police themselves. 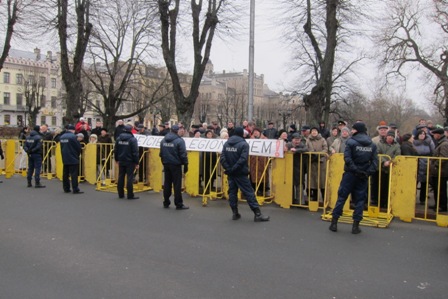 Before the start of the event, a delegation, who had obtained permission, laid a wreath at Liberty Monument in memory of the victims of the Latvian Holocaust.

Just before the actual ceremony got underway, officials covered over the wreath with the Latvian Waffen SS emblazoned sign, seeming to use the wreath as a kind of stand to keep the sign upright. Moreover the black ribbon in memory of the Holocaust’s victims was pushed underneath the wreath onto the pavement.

Later, during the ceremony, Joe Koren, a leader of Latvia Without Nazism, and Latvian member of the European Parliament Tatyana Zhdanok moved the wreath from under the Waffen SS sign to separate it from the Nazi-era emblem. 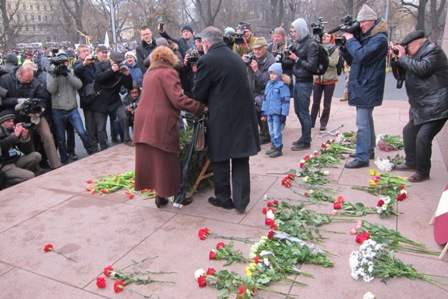 Mr. Koren and MEP Zhdanok were rapidly and roughly removed by police and a scuffle ensued, with a mass of photographers closing in on the scene. 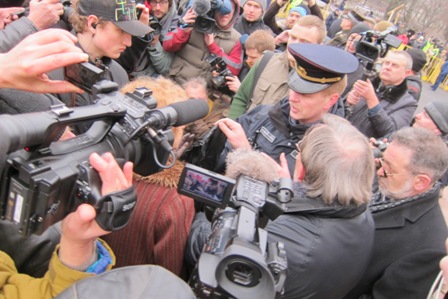 For many years, state-supported pro-Nazi demonstrations throughout Eastern Europe and beyond have been unnerved by the determined and morally compelling presence of Holocaust historian, justice seeker and Nazi hunter Dr. Efraim Zuroff, director of the Simon Wiesenthal Center Israel office. Today’s march was no exception. Dr. Zuroff gave a large number of interviews to local and international media, persuasively countering the official line that honoring the Waffen SS was merely a matter of respect to some fallen soldiers. 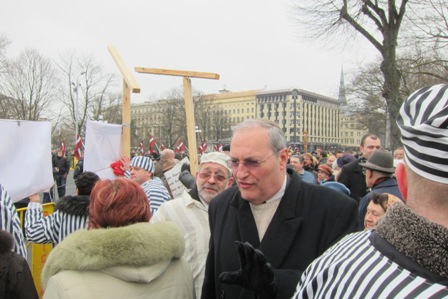 Perhaps the most vocal condemner of the march and the phalanx of state-supported Nazi-glorifying activities was Joel Rubinfeld, co-president of the Brussels-based European Jewish Parliament. Here (at right), he is telling one of the senior police officials on hand that the event is a disgrace to the European Union and civilized society (DefendingHistory.com video). 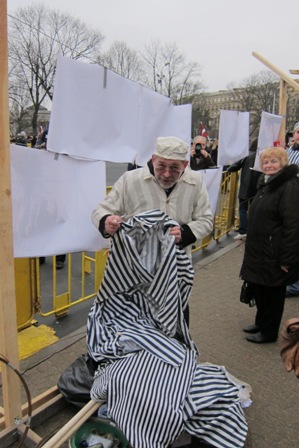 One of the first to don the uniform was petition organizer Monica Lowenberg of London, whose uncle, Paul Theodor Loewenberg (Levenbergs), was a German Jew who sought refuge in Latvia in 1940 and was then, after the Nazi invasion, incarcerated in the Riga Ghetto in 1941, and killed along with much of Riga Jewry at the nearby Rumbula mass murder site. 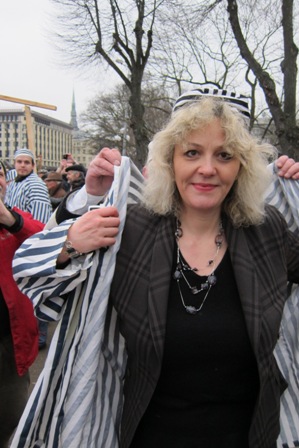 Ms. Lowenberg played a prominent role in confronting pro-fascists throughout the event. Here, arguing with a young nationalist who said he was a lawyer, she is flanked by fellow demonstrator Algirdas Paleckis, a controversial Lithuanian politician who has steadfastly combated state efforts to obfuscate the Lithuanian Holocaust and rehabilitate the local killers as supposed national heroes. 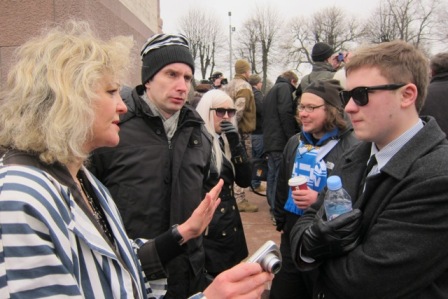 For what seemed a considerable expanse of time, Ms. Lowenberg seemed to be guarded by a designated policewoman who tried, without success, to prevent her from entering the pro-fascist area. 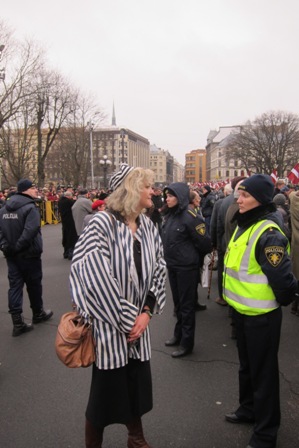 To add to the forces protesting the glorification of Nazism in Latvia, the Latvia without Nazism organization, led by Valery Engel and Joe Koren, held an International Roundtable on the march and on the rise of neo-Nazism in the region to coincide with the March 16th event (with a long morning coffee break to enable participation in the anti-Nazi effort). 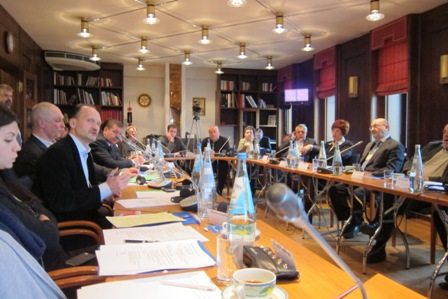