VILNIUS—As covered sequentially by DH over the past year, the official “Lithuanian Jewish Community” (LJC) saw its democracy abruptly dismantled in the spring of 2017 with the mid-campaign rule-change whereby the three thousand or so surviving Jews of Lithuania were disenfranchised and their voting rights replaced by a roomful of “Jewish oligarchs,” most of whom are beneficiaries of funds allocated by the government’s Good Will Foundation. Some have two or three votes, some represent defunct organizations, and one, who has two votes actually lives in Brussels. Western observers have compared it with some irony to the original Zero Mostel version of the Hollywood film The Producers. In any case, the “election” was ruled illegal by the Lithuanian courts in a case that brought their judicial independence to the fore, to the nation’s great credit.

Observers have pointed to the dangers of restitution settlements with East European governments that end up destroying communities’ democracy and independence in the direction of becoming “Jewish PR” units for the state with massive glories falling upon one or a handful of “court Jews” who serve to showcase state policies to the outside world.

This morning, in a moving, peaceful, elegant demonstration, around 100 Jewish people from across Lithuania dared defy the “strongman chairwoman” and turned out to demonstrate. The peaceful resistance was led by the Vilnius Jewish Community and the main speaker was its elected chairman, Simon Gurevich (Simonas Gurevicius). The rally, held in the park across the street from the community building, was chaired by Elen Janovskaja. Attendees included the prominent Vilnius Jewish personalities Milan Chersonski, Leon Kaplan, Ilya Kogan, Arkadi Kurliandchik, Chona Leibovich, Daniel Lupshitz, Prof. Josif Parasonis, Michail Safian (son-in-law of Fania Brantsovsky), Dima Vinitzky, and dozens of others. Among them was Shulamita Lev, who was featured on Lrytas.lt’s television documentary last week as one of the many Jewish people humiliated and fired in the course of the  recent program of “Lithuanization” of the community’s staff.

But this was not strictly a Vilnius Jewish Community (VJC) event. Community leaders from around the country who joined in the protest included Feliks Puzemsky (Klaipeda [former Memel]); Sania Kerbel and Michail Rostovski and their delegation (Siauliai [Shavl]); Moishe Bairak (Kaunas [Kóvne]); A. Taitz (Ukmerge [Vilkomir]). Rabbi Kalev Krelin who had served as chief rabbi for several years flew in from Riga for the event.

Free and fair elections, in which every member of the country’s Jewish community has an equal vote, monitored by an outside ombudsman or polling organization

The Vilnius Jewish Community rapidly published a summary and photo gallery of this morning’s event on its Facebook page. Lrytas.lt covered the event on its daily television news (see its TV news report on Youtube).  Tech2.org published a report. The Lithuania Tribune (English Delfi) republished from the website of the official LJC (and from Lithuanian language Delfi.lt)  a long essay by the current chair of the official LJC, which failed however to mention her allegedly fraudulent election or the primary and starkly simple remedy called for by the overwhelming majority of Jewish people in the country: free and fair elections monitored by an outside ombudsman or respected election administration company. An LJC-slanted report was released by BNS, and its English version rapidly posted on the LJC website.

The assembled were deeply inspired by the speakers, especially the elected chairperson, Simonas Gurevičius​ who concluded the meeting with an ancient Hebrew song calling for peace to come upon  the people of Israel and on all the world. It made for a stark contrast with the image of the once-friendly official community building across the street whose main entrance was guarded by a private security firm (as if someone would try to “break in”…).

There was also a small group of LJC board members who came out to confront the protestors, plus one agitator who seems to surface each year to disrupt democratic meetings of the Jewish community. He asked to speak and was graciously given the microphone by the chairperson. He used his time to personally attack Mr. Gurevich.

Two curious observers seemed to come, so to speak, from the state’s “Jewish monitoring agencies”. One curious observer who stood among the protesters as if to “take notes” was Ronaldas Racinskas (see penultimate photo, below), executive director of the state’s commission for Holocaust revisionism known as the “red-brown commission” but officially as the “International Commission for the Evaluation of the Crimes of the Nazi and Soviet Occupational Regimes of Lithuania.” He became an international icon of the Double Genocide movement with his appearance several years ago in a German documentary film (in which he “explains the need” for the prosecution attempts against Holocaust survivors), and earlier, when he used the commission’s website to call Prof. Pinchos Fridberg a liar for having corrected an error.

The other curious monitor, perched on a rise overlooking the Jewish gathering, was the official Jewish community’s “director of the secretariat” Monika Antanaitytė, daughter of the eminent Lithuanian diplomat Violeta Gaižauskaitė, whose posts have included serving as adviser to former President Valdas Adamkus and as director of the Foreign Ministry’s Department of Information and Public Relations. In recent years, visitors to the official state-financed Jewish Community have reported on wisdom heard from Ms. Antanaitytė, including the claim that Chabad Lubavitch “had never been in Lithuania prior to World War II” and perhaps more disturbingly, that today’s Jews just cannot represent themselves anymore, hence the need for the massive non-Jewish official representation by herself and others. The larger issue raised is the effective takeover of weak East European Jewish official communities by sectors of the state whose interests differ from those of the surviving minority community members such communities exist to represent.  See final photo below. 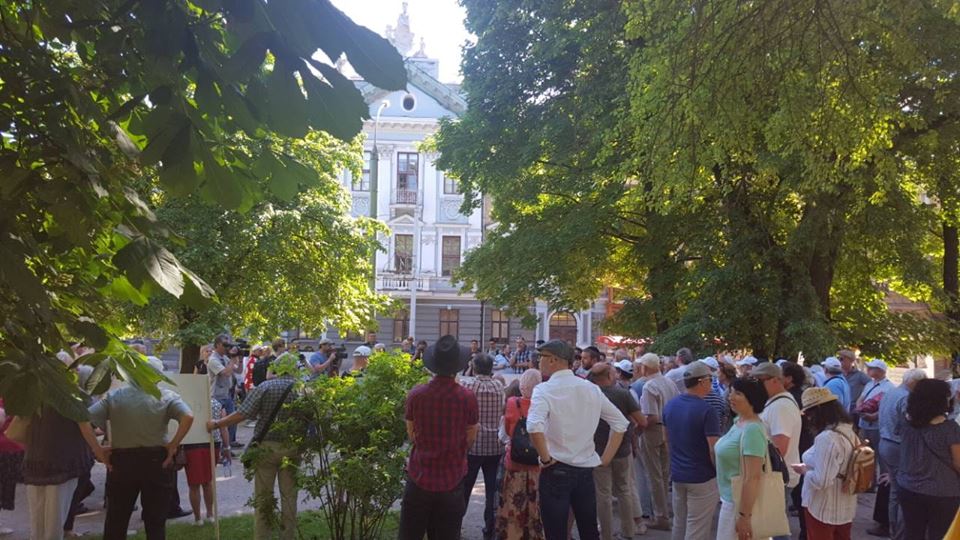 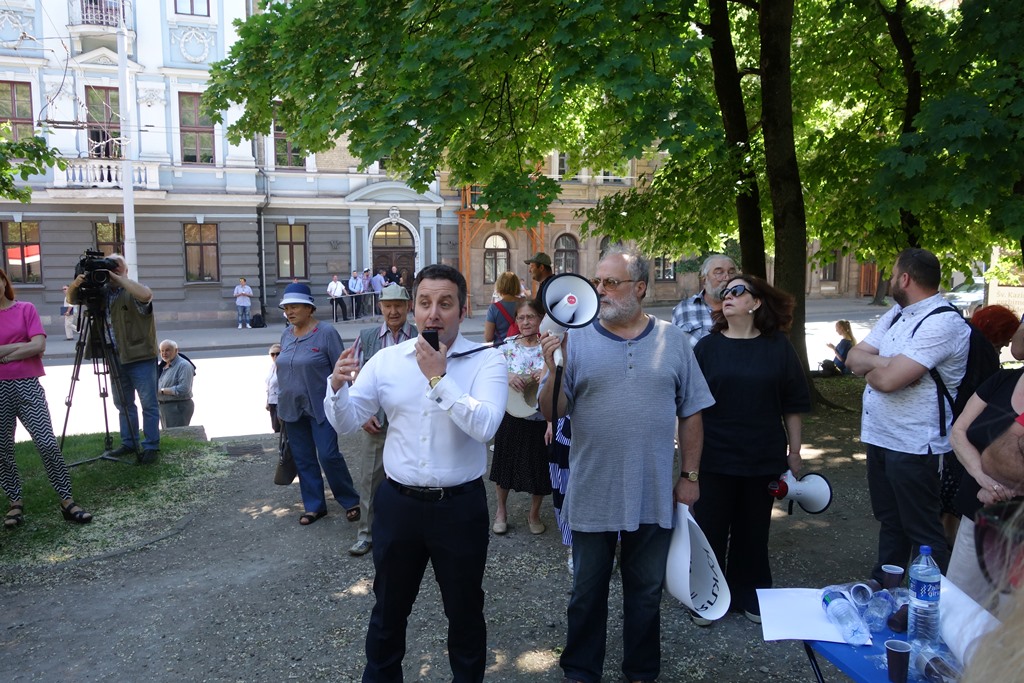 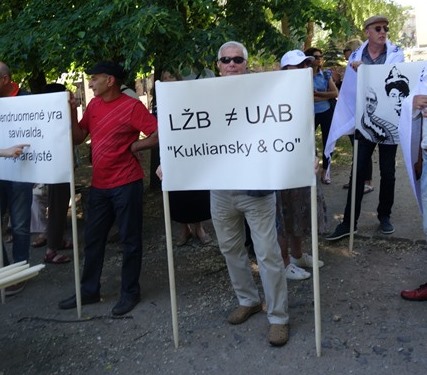 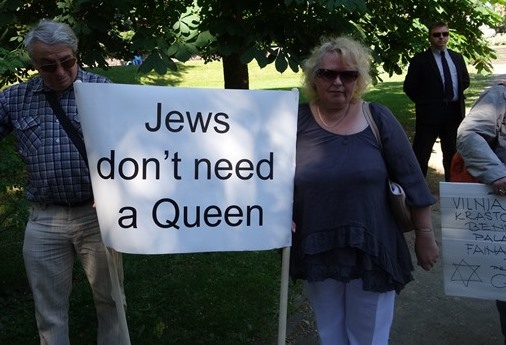 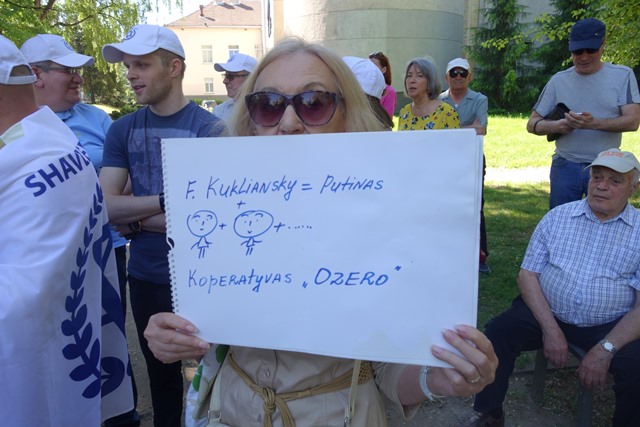 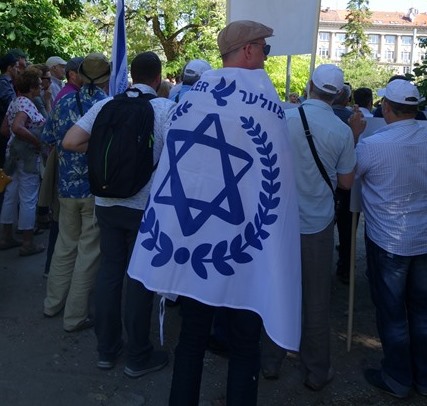 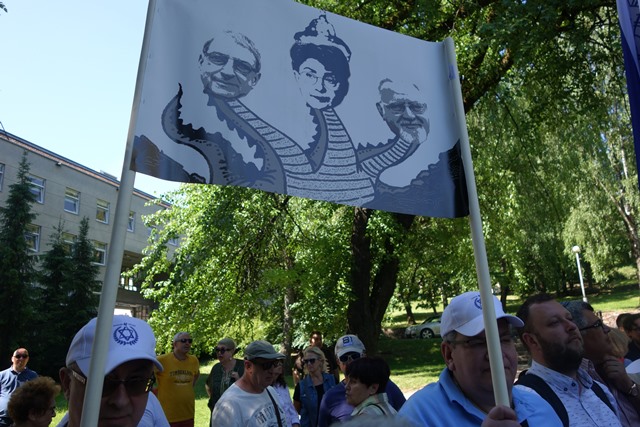 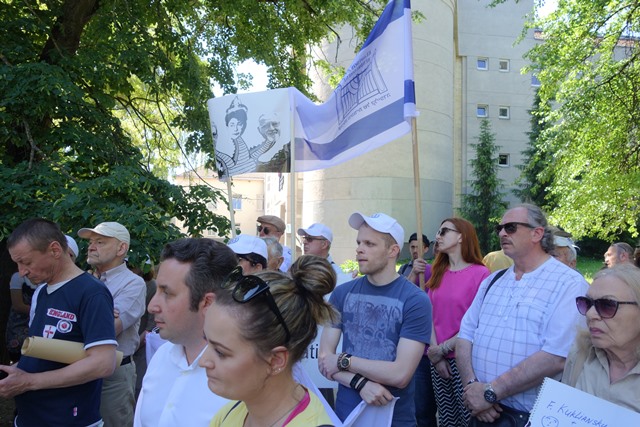 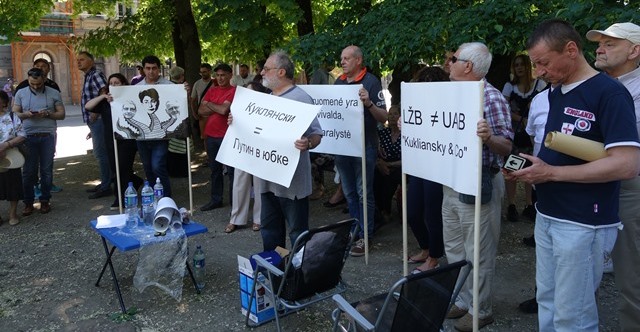 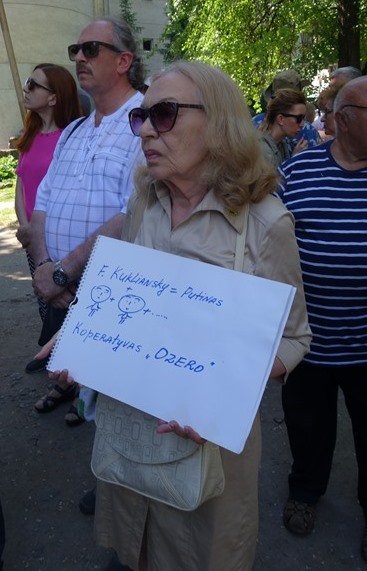 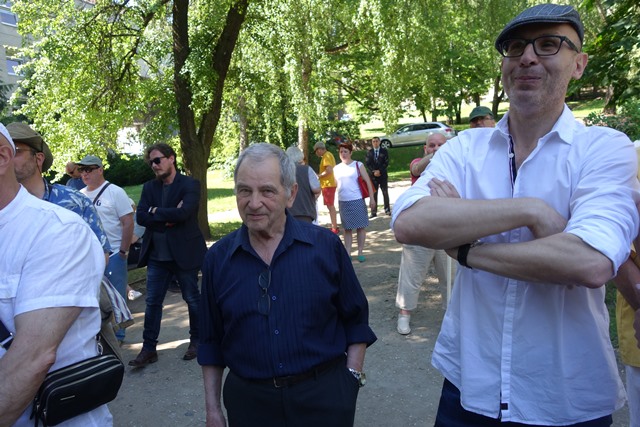 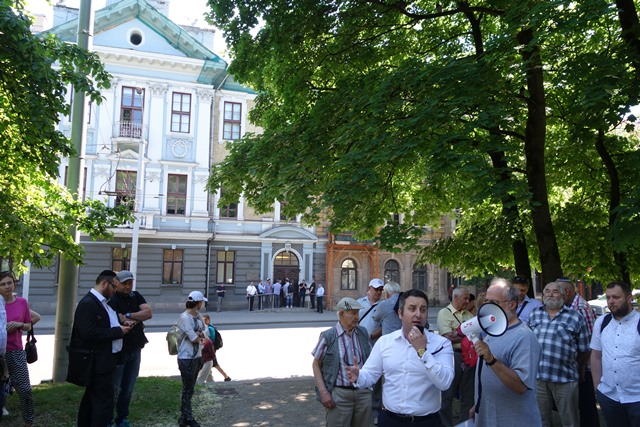 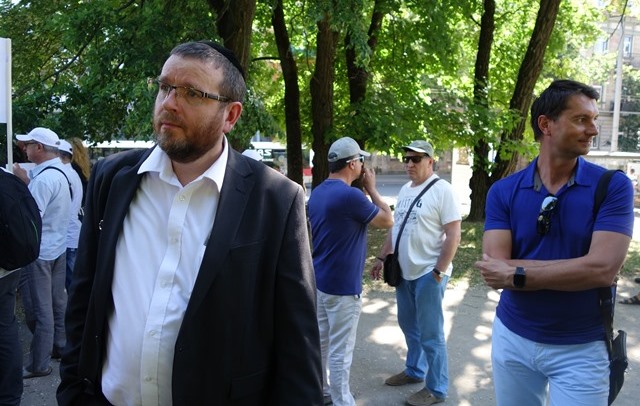 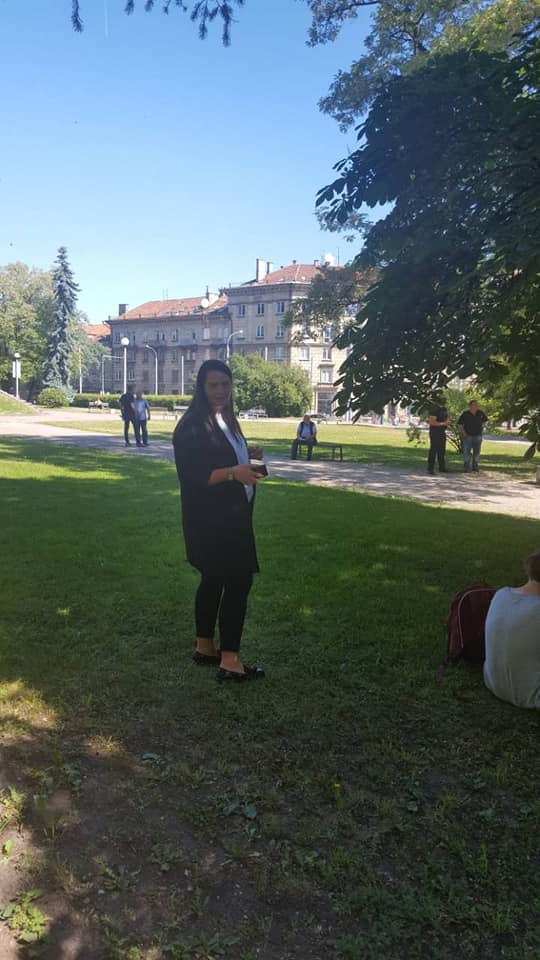 Monika Antanaitytė, daughter of the eminent Lithuanian diplomat Violeta Gaižauskaitė and now “Director of the Secretariat” of the state-sponsored “Jewish Community (Litvak) of Lithuania” was busy monitoring the living Jewish people of Lithuania who came out to protest.