The leading neo-Nazi blogger in Lithuania, “Zeppelinus,” who was unmasked several months ago by a number of publications as a high official at the Ministry for the Economy and chairman of the nation’s Tripartite Commission, did not deny the identification.

Instead, quite incredibly, he complained to the press commission against those who would dare deem to be unacceptable his hateful racist, antisemitic, homophobic and pro-fascist productions.

Defending History was one of the publications honored to be enumerated in his filing with the press commission. For our part, we issued an Open Letter to the new Minister for the Economy, respectfully pointing out that successful economies are open to talent and enterprise from all segments of the population, and noting how damaging it would be for Lithuania’s European Union presidency this year to be tainted by such a bizarre statement of a ministry’s  legitimization of intolerance, racism, antisemitism and homophobia. There has been quite enough damage over the lamentable attempts to keep this Saturday’s Baltic Pride march away from the city center of Vilnius, where neo-Nazis received every support from the police on independence day March 11th.

Even more incredibly, Mr. Zeppelinus is apparently still an official at the Ministry for the Economy, a huge embarrassment for Lithuania during the inaugural month of its EU presidency.

More incredibly still, he has greeted Baltic Pride 2013 here in Vilnius with the following image (more samples of his hateful materials here). The hard working and noble people of Lithuania deserve better. They have every right to precisely the same standards of human rights that are at the core of the European Union and the NATO alliance. 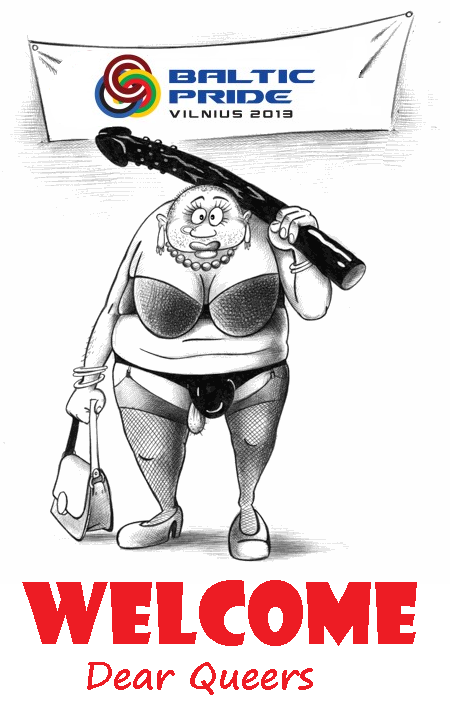