Posted on 2 November 2022 by Defending History

KAUNAS—The last Holocaust survivors in this city that gave birth to the Lithuanian Holocaust on 23 June 1941 (before the first German soldiers arrived, later that week) are in pain to learn that their government is now investing in foreigner-rich “Jewish” and “Litvak” and “Yiddish” events as part of gala PR for this year’s Kaunas 2022 “Capital of European Culture” program — without also removing the city’s shrines to the most infamous collaborators and perpetrators of the genocide. The Defending History community congratulates Kaunas on the European year of honor, while urging its foreign participants and honorees to politely and with dignity call  (publicly!) for Kaunas to kindly remove its prominent state-sponsored public-space shrines, monuments and memorials to major local Holocaust perpetrators and collaborators. By speaking out, with dignity and publicly, they would be successfully countering the moral taint of ipso facto being used as “Useful Jewish Idiots” (known as “UJIs”) to cover for the ongoing failure to remove even one such shrine and thereby participating actively (and having been forewarned) in the current (East European based) incarnation of Holocaust revisionism and denial (covered up with lavish “Jewish events”). By failing to do so, they would bring moral taint upon themselves for all time, while deeply offending the legacy of the victims and survivors, and more broadly, the rights of minorities everywhere to life without genocide.

The Kaunas region even has a state school named for an alleged killer at the June 1941 Lietukis Garage Massacre, one about which the British Parliament weighed in.

Kaunas 2022 tourist sites include a state-university sculpture and lecture hall (!) named for the 1941 Nazi puppet prime minister Juozas Ambrazevičius (Brazaitis) who signed papers sending groups of Jews from Kaunas (in Yiddish Kóvne) to a nearby murder site and the rest to ghetto incarceration; a street named for brutal Holocaust perpetrator J. Noreika (see his granddaughter’s courageous new book); a school named for J. Lukša, implicated in some of the most barbaric Kaunas atrocities before the Nazis arrived (including the beheading of Rabbi Zalmen Osovsky; even the British Parliament weighed in on that one); a street and plaques for “theoretician and cheerleader of ethnic cleansing and genocide” K.  Škirpa; a street for Holocaust collaborator Antanas Baltūsis-Žvejas; and more (see map with links to photos, and more street names). While some foreign Jewish glory and photo-op seekers have failed the basic test of moral integrity, Lithuania’s own intrepid ethicist, Evaldas Balčiūnas, has stepped up for a decade with a series of detailed articles on state glorification of Holocaust collaborators (and, far from a fun-trip, poster, and photo-op,  he has paid a big price). 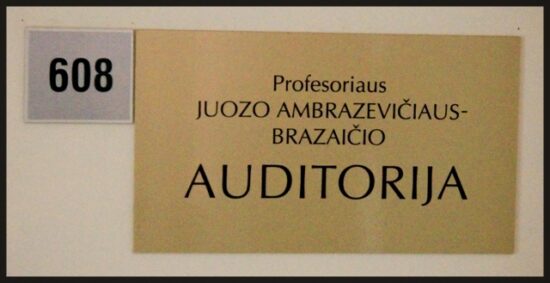 Kaunas’s prestigious state-sponsored Vytautas Magnus University over a decade ago named a lecture hall (and adorned it with  a bas-relief ) glorifying the city’s Nazi collaborator who was Hitler’s puppet prime minister during the outbreak of the Lithuanian Holocaust and the slaughter of nearly all of Kaunas’s Jews. Will this now come down as the city includes Jewish, Litvak, and Yiddish PR events as part of the Kaunas “2022 Capital of European Culture” program? 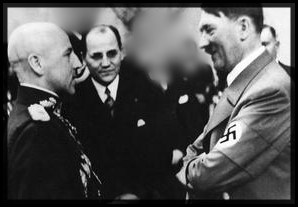 Man in the middle is K. Škirpa, busy in Berlin in the months leading up to Hitler’s invasion of Lithuania writing essays and pamphlets on making Lithuania free of Jews. Why does Kaunas have a street name and multiple memorials to him?

“(…) We also respectfully ask authorities to honor the beautiful and inspiring city of Kaunas by rapidly removing street names, plaques, monuments and other memorials that glorify the Holocaust collaborators and perpetrators who helped ensure the near total genocide of the city’s Jewish citizens.”

From some of this week’s email blasts: 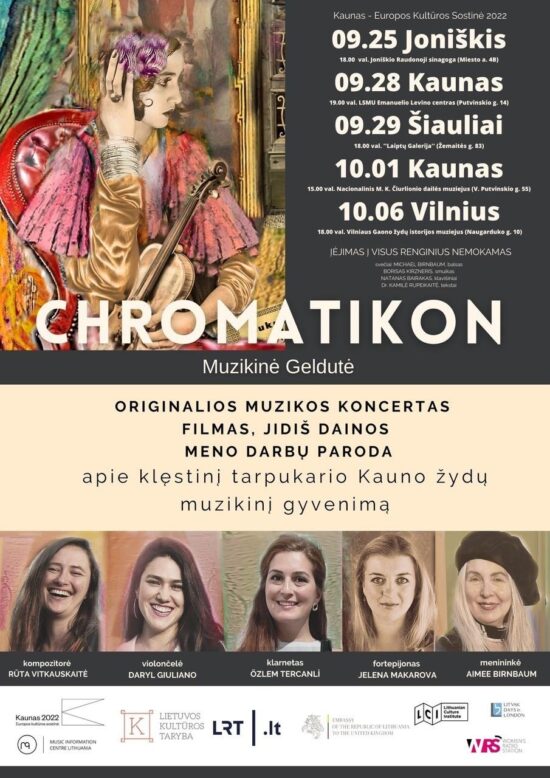 From one of this week’s email blasts:

We at Chromatikon are thrilled to invite you to our performances in Lithuania as part of “The Music Shell” project as part of the Kaunas European Capital of Culture 2022 festival.

In October 2021, as part of “Litvak Days” conference at the Lithuanian Embassy in London, Chromatikon gave the world premiere of “The Music Shell”  to great acclaim. This multimedia work is a homage to the flourishing cultural life of the Jewish community of Kaunas before WW2. Live performance of Rūta’s original score, historical film footage and Aimee’s artwork are combined to evoke the cultural and café society of the city. It features fascinating interviews with members of the community provided by Daiva Citvarienė, curator of the Kaunas 2022 European Capital of Culture. It is both a joyful recovery of this vanished world through music and art and a reminder of the Holocaust, when the once flourishing Jewish community of Kaunas was almost completely eliminated.

Here is our European Capital of Culture Kaunas tour schedule:

More details will follow to listen into our concert live streaming from the National Museum of Art in Kaunas, Lithuania: M. K. Čiurlionio Dailės Muziejus

This entry was posted in "Jewish" Events as Cover?, Kaunas, News & Views and tagged Kaunas Capital of European Culture 2022. Bookmark the permalink.
↑ Return to Top