Vilnius Braces for May 7th “Jewish Cemetery Trial of Century”; Around 160 Plaintiffs Recognized by Court

Posted on 27 February 2020 by Defending History

VILNIUS—At a hearing at the District Court of Vilnius City, at Laisves Prospect 79A on Monday, the presiding judge set Thursday May 7th 2020 as the date of the trial over plans of the state-financed property bank, “Turto Bankas” to establish a national convention center in the heart of the Old Vilna Jewish Cemetery. The plaintiffs in the case are Jewish people whose ancestors and relatives are still buried in the old cemetery, at Piramónt (in the Šnipiškės district of modern Vilnius). Of hundreds of claims submitted, sources close to the court reported that “around 160” have been accepted as legal plaintiffs for the trial, which is expected to attract expert witnesses from the United States and Israel as well as foreign media interest. There has been extensive international opposition to the convention center project, including impassioned pleas from major Lithuanian-origin rabbis internationally, most recently the doyen of Litvak rabbis, Rabbi Chaim Kanievsky, a nephew of Vilna’s prewar Chazon Ish. A petition by Vilnius native Ruta Bloshtein has garnered some 47,000 signatures.

The Soviets pilfered all the gravestones, and constructed the “Sporto Rumai” (Sports Palace) in the cemetery’s center, but generally left untouched thousands of actual graves on all four sides, as demonstrated both by ground radar and by the appearance of visible human remains whenever any digging in the area has been undertaken. Over a decade ago, two buildings were built on the cemetery’s edge, after the state set up an international committee with allegedly “pliant” foreign Jewish representatives on board.

Although the various “relations with the Jews” specialists and departments in the government have given assurances that the matter would be solved properly, the government is said to be itself financing the Turto Bankas legal case which is in effect supportive of the builders and contractors who stand to benefit financially, as well as the antisemitic establishment that does not want a “big Jewish thing” in central Vilnius. Most recently, the state-paid Turto Bankas lawyers claimed that the derelict Soviet sports palace is not even on the cemetery at all. In fact, investigations by American services and the US embassy in Vilnius determined years ago that “The Sports Palace property indisputably rests in the middle of the former cemetery” (see point no. 5).

In December, they, the head of the state-supported Jewish community, and representatives of the London based Satmar Aaronite anti-Litvak “CPJCE” (exposed years ago by Wikileaks for taking secret payments for their permissions and supervisions) reached a secret agreement on the convention center plus annex project, on what has been dubbed “A Day of Shame” in the annuals of Lithuanian Jewish history. By contrast, the head of the democratically elected Vilnius Jewish Community told the New York Times: “The Soviets didn’t build just coincidentally the Sports Palace there, they built it as part of an antisemitic campaign of destruction of Jewish sites. Is this Soviet despotism a part of the heritage we would like to keep?”  Moreover, the opposing faction of the Satmar hasidim, the Zalmanites, and their grandrabbi, have unequivocally condemned the plans for a convention center in the old Vilna Jewish cemetery.

The plaintiffs in the case call on the government to move the national convention center to another venue so that the cemetery could be restored as a major sacred site of historic Vilna, once known as the Jerusalem of Lithuania. They are represented by the European Foundation for Human Rights which recently issued press statements updating the case’s progress in Lithuanian, English, and Polish.

Local opposition to the use of the cemetery for a convention center is led by Lithuanian intellectuals Dr. Andrius Kulikauskas editor of the new web journal VieningaLietuva.com (United Lithuania) and Julius Norwilla (Norvila), chair of the Committee for the Rescue of Piramónt Vilna Cemetery, whose recent article  on the danse macabre of a convention center in a cemetery elicited wide attention. Recently, Lithuania media has finally been providing both sides of the story (see e.g. in  SA.lt, and  in Lrytas.lt).

Jewish residents of Lithuania who have spoken out include the longtime editor of the Jewish community’s former quadrilingual newspaper, Milan Chersonski, Vilna-born Holocaust survivor Prof. Pinchos Fridberg, Prof. Dovid Katz, and Prof. Josif Parasonis, The last official chief rabbi of Lithuania was fired in 2015 for opposing the convention center project.

Some are already referring to the May 7th Vilnius trial as “the Jewish cemetery trial of the century” given the increasing alleged activity of the CPJCE and others to monetize Jewish cemeteries in Eastern Europe on post-Holocaust territory. Many of the proponents of the cemetery’s preservation and restoration point out that it could become a major site of international pilgrimages once restored. Various visualizations have appeared in this journal, including the following (which is for illustrative purposes and not to scale). As Dr. Kulikauskas put it, “What do we want our grandchildren to see? The beautiful old Jewish cemetery that our Grand Dukes saw from Castle Hill, or the Soviet monstrosity that the commissars looked down upon?” 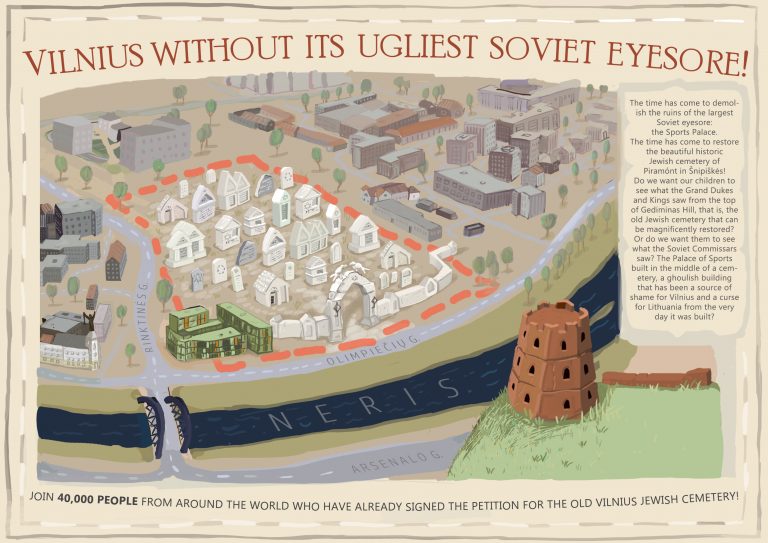