Posted on 1 March 2020 by Defending History

VILNIUS—The entire Defending History community celebrates Lithuania’s independence day this coming Wednesday March 11th. Lithuania’s independence and democracy, like those of of neighboring EU/NATO states, are splendid success stories in the annuals of the region. All the more reason to be vigilant — as genuine friends of the Baltics are — against those who would try to insert Nazist values of ethnic hatred and Holocaust revisionism into the mix. We sincerely hope that the “nationalist” march for which the beautiful center of Vilnius is gifted each year will this year not glorify local Holocaust and Nazi collaborators, will not heap scorn on  the nation’s minorities and will not flaunt fascist symbols.

The Defending History team has been monitoring these events since 2008

We invite colleagues to join our small team of observers this Wednesday, March 11th, 3:15 PM at Cathedral Square, Vilnius, who will then monitor the march on Gedimino Blvd. to the Seimas. It is our tradition to monitor the events silently and with dignity, to think about the hundreds of thousands of Jewish citizens of Lithuania murdered by the Nazis and their local loyals, to record by photos and video for history, and to report accurately for the records of posterity.

Vilnius 2008: The focus was hate of minorities and worship of Nazi symbolism. 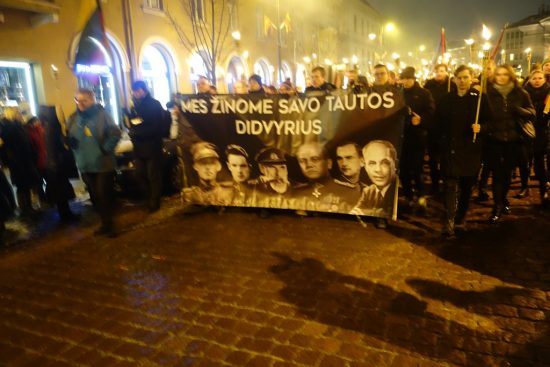 Vilnius 2018: Emphasis on the glorification of Nazi collaborators, particularly those implicated in the massacre of Lithuanian Jewry during the Holocaust.