Did USCPAHA’s (and AZM’s, and GWF-LJHF’s) Point Man on Old Vilna Cemetery Flip Yet Again?

Posted on 13 March 2019 by Defending History

VILNIUS—Little known to the wider public, the United States Commission for the Preservation of America’s Heritage Abroad (USCPAHA) is a scandal-ridden federal agency in Washington DC that is funded by taxpayer dollars to preserve endangered Jewish and other minority cemeteries, particularly in Eastern Europe. But is the USCPAHA really in cahoots with the allegedly corrupt bodies (CPJCE in London, “Admas Kodesh” or “AK” in NY) who gave “permission” for a convention center in the heart of the old Vilna Jewish Cemetery against the views of all other rabbis and ethicists (and in circumstances involving large secret payments)? The NY branch (AK) has published crude personal invective against scholars who hold other opinions, including Prof. Bernard Fryshman (who has now taken USCPAHA to the courts).

See the new video of Herbert Block’s formal new presentation to a major rabbi cites only USCPAHA’s partnership with these two bodies. There is zero mention of the international petition (which he himself signed…) or the vast international opposition, including letters from twelve United States congressmen, three senators, ten members of the Knesset, the chief rabbi of Israel, and the former chief rabbi of Lithuania (who was fired for speaking out). Is Mr. Block afraid of the rabbi learning of that information too? Is he troubled to be misinforming the venerable rabbi about the situation by omitting the imminent danger of thousands cheering and singing in a convention center surrounded by thousands of Jewish graves including his own ancestors? 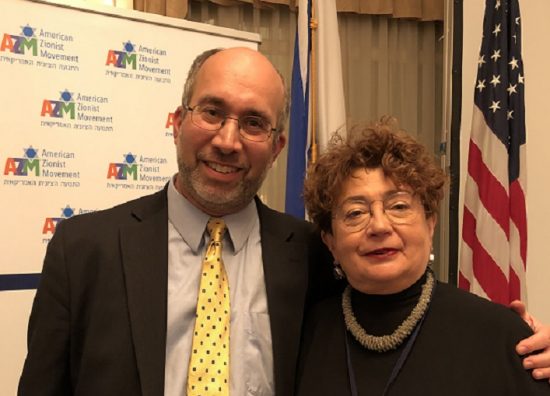 USCPAHA’s, GWF’s and AZM’s Herbert Block with eminent Vilnius attorney Fania Kukliansky. What’s new with plans for the convention center in the cemetery?

Mr. Block, the member of USCPAHA designated as its specialist on Vilnius is also executive director of the American Zionist Movement. Does the American Zionist Movement associate itself with USCPAHA’s cruel games in the international market of Holocaust-area Jewish cemeteries, so attractive for builders, developers and corrupt politicians throughout Eastern Europe? Does the American Zionist Movement think that Jewish graves in the diaspora should be effectively up for sale to the highest bidder? How does it feel about the obsequious and fawning collusion with the corrupt (and virulently anti-Zionist) “Aaronite” branch of Satmar whose London adherents are at the heart of the scandal? Most recently, Mr. Block arranged for AZM to invite for a gala event the “change-the-rules election” head of the government sponsored Jewish community in Lithuania, an eminent attorney who has in some views betrayed Jewish values by supporting builders and politicians in their promotion of a convention center project in the heart of Vilna’s old Jewish cemetery. According to the official state-sponsored community website, she was invited by AZM “to  speak about the Zionist movement in Lithuania,” presumably reflecting her specialist research on the subject. This was however disputed in  a statement by Mr. Block to Defending History in which he insists “she did not speak at the conference or make a presentation” but was invited as a courtesy because “she was visiting at the same time as the AZM Biennial Assembly.”

There has been no AZM invitation to the democratically elected head of the Vilnius Jewish Community, Simon Gurevich, who has spoken up with courage and integrity about the cemetery. See for background Professor S. Leiman’s response to the state-anointed “Jewish leader” on the issue of the old Jewish cemetery. To make the intricate web of conflicts of interest even worse, Mr. Block is a member of one of the boards of the Lithuanian government sponsored “Good Will Foundation” that continues to starve the democratically elected Vilnius Jewish Community of any funding while lavishing some 20o,o0o euros a year of government money for just “public relations” within the “official” community’s vast budget.

Question: Is the Old Vilna Jewish Cemetery going to fall victim to a noxious web of vested interests and incredible conflicts of interest, including local builders and politicians, local and foreign coopted “Jewish entities”, foreign rabbis who take secret payments for “permissions to build on cemeteries”, American and Israeli international Jewish organizations with deep governmental ties and machers hooked on junkets and medals, conflicted attorneys and PR types?

A tale of two videos: The CPJCE with the prime minister of Lithuania, and USCPAHA’s Herbert Block explaining his commission’s work to the rabbi in Israel . . . See also earlier Admas Kodesh photo gallery of USCPAHA “reporting to Satmar Rebba in Monroe”… (Note: Leader of the opposing Satmar dynasty, the “Zalmenites,” has himself condemned the convention center project in Vilnius). Incidentally, one of Mr. Block’s colleagues on the USCPAHA is Chelsea Clinton’s mother-in-law Marjorie Margolies.

The basic story (DH’s section). International opposition to date. The USCPAHA. The CPJCE.