Posted on 17 December 2017 by Defending History

VILNIUS—With the permission of the publishers of The Weekly of Vilnius, we are reproducing extracts of two comments from this week’s edition that covers Lithuanian news from 11 to 17 December 2017. The Weekly of Vilnius is sometimes considered to be this city’s most prestigious English-language news publication, famed for its editorial independence and capacity for presenting views that tend to be ignored in the nationalist and ultranationalist media that can be fixated with the “official line.” In the spirit of classic journalism, The Weekly of Vilnius has no online edition (there is an online description and Facebook page) and is available weekly by emailed PDF or hard copy to its elite circle of subscribers, known to include embassies, government agencies, captains of industry, politicians, academics,  libraries, and think tanks.

See also:  Does ambassador’s gesture “legitimize” naming of 2018 for an alleged collaborator?

First, on the subject of this week’s visit with flowers by the ambassador of Israel to the daughter and (successful) chief campaigner for 2018 to be named by the Lithuanian parliament for an alleged Holocaust collaborator (see Defending History‘s coverage), The Weekly of Vilnius highlights, accurately, we believe, the current Israeli embassy’s proclivity for implicitly claiming to act for “the interests of Lithuanian (or Litvak) Jewry” and to speak for “Lithuanian-Jewish relations” when in fact the (sometimes short-term) interests of the present Israeli government are (quite naturally) the determining factor. In fact, the embassy has arguably established a record of harming Lithuanian Jewish interests since it was opened in early 2015. Most shockingly, the Israeli Foreign Ministry seems to have “muscled in” even on restitution payments, deriving from the religious properties of the annihilated communities, now intended for the survival of the Lithuanian Jewish community. See the relevant entries in the grant items enumerated here and here. 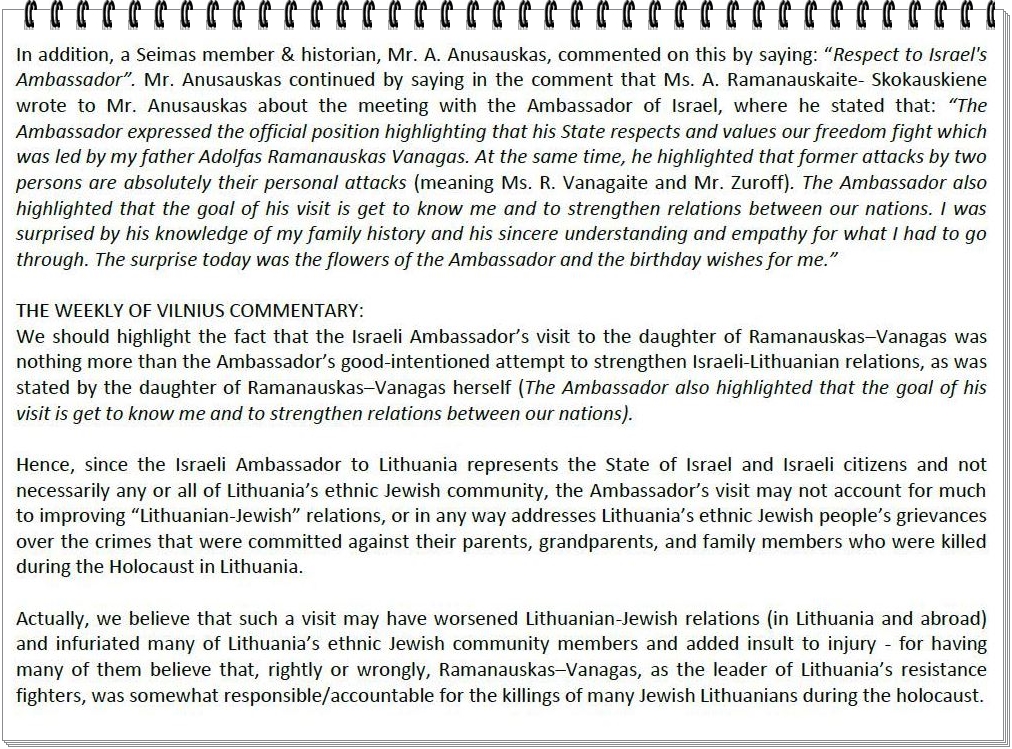 The same theme is elaborated in a second episode from this past week, in which the Israeli Embassy proposed a plan for commemoration of Holocaust-era mass grave sites with lists of the victims and perpetrators (a noble idea long championed by survivors and their advocates). The problem is that instead of entrusting the academic research to one or more of the major international Holocaust research centers (in partnership with excellent local scholars), this is increasingly promoted as a project for the heavily discredited Genocide Research Center here in Vilnius which has a record of obfuscation, distortion, and lack of reliability, what with positions skewed in an ultranationalist far-right spirit. Its escapades over the years have included minimizing the numbers of perpetrators, covering up for perpetrators it “wants to keep” as national heroes, and smearing Holocaust survivors who joined the anti-Nazi resistance. Local Jews were generally shocked that anyone purporting to represent Jewish sensibilities or interests would even consider the Genocide Center as a reliable partner for projects to accurately memorialize the historic truth about the Holocaust in Lithuania.

It is noteworthy that here too The Weekly of Vilnius has accurately picked up on the tendency of the current Israeli embassy to usurp  moral prerogatives of the Lithuanian Jewish community, a community with diverse branches both in Lithuania and internationally. Since last spring’s rigged elections (still before the courts) of the government-sponsored “Lithuanian Jewish (Litvak) Community” leadership, the Israeli embassy has propped up the ersatz leadership with innumerable photo-ops (even at the mass murder site Ponár) while usually fully excluding the democratically elected leadership of the 2,200 person strong Vilnius Jewish Community, whose election results were recently reconfirmed by the courts.

Last but not least, we are happy to note the inclusion by the ambassador of the elected head of the Vilnius Jewish Community for the first time at the embassy’s excellent Chanukah celebration held earlier today at the presidential palace. It was also heartwarming to see inclusion of a performance of Yiddish songs by a beloved local singer. It is hoped that this newfound respect will now be extended beyond entertainment to the text on public commemoration tablets and street names, as well as postage stamps honoring Litvak culture.

Our compliments to the ambassador and his team on both these important steps forward.