Posted on 12 November 2015 by Defending History

LONDON—At the initiative of Monica Lowenberg, Defending History’s London correspondent, UK member of parliament Gareth Thomas (Labour) tabled a question in the House of Commons (no. 14144) on 29 October 2015 on the planned desecration of the old Jewish cemetery at Piramónt (in the Šnipiškės district of Vilnius, Lithuania) by construction of a twenty-five million dollar national convention center. His question, and the reply by the current Minister for Europe, David Lidington, of 3 November 2015, are reproduced below (and available online).

The UK political framework entails the issues around the ruling Conservative party’s alleged dalliance with far-right elements in the European Parliament and a resulting policy of apologetics and obfuscation on behalf of East European governments’ antisemitic, racist and Holocaust revisionist inclinations, when and where such manifest themselves in the recent accession states in the east. For more background see Defending History’s UK page and section, and relevant sections of a January 2010 op-ed in the Guardian, and articles and statements by former UK parliamentarian Denis MacShane on a range of related issues. In the past, much of the debate has focused on Latvia. See, for example, the 2013 debate concerning the annual Waffen SS march in central Riga. One classic critique of policies in this area remains a 2009 article by the late UK historian David Cesarani.

To this day, Europe Secretary Lidington has refused to release the contents of the dramatic 2010 letter to Lithuania’s leaders organized (and drafted) by then UK ambassador to Lithuania HE Simon Butt. The wider human rights implications of desecration of minorities’ cemeteries (particularly those of exterminated minorities) have been addressed by a 2014 law in the United States Congress and various initiatives in the Council of Europe.

Turning to Lithuania and the saga of its capital city’s fifteenth century Jewish cemetery at Piramónt, it is noteworthy that the Europe Minister’s response, obviously channeled from the Lithuanian Foreign Ministry, rests on two pillars.

First, is the enthusiastic support for the convention center by a single Jewish leader in Lithuania, the community chairperson, whose conflict of interest as the nation’s major citizenship lawyer for wealthy foreigners, recently cited in the Jerusalem Post, makes the massive local and international opposition to the project, not mentioned by the minister, stand out even more. It is considered significant that this past August she dismissed her nation’s chief rabbi of eleven years, after he issued his own statement opposing the cemetery’s further desecration. Dissent in writing from within the Jewish community includes a Vilnius Holocaust survivor, a kashruth supervisor, head of the Kaunas religious community, a professor of architecture, the longtime chief rabbi, and a second resident rabbi. A direct and historic reply to points by the community leader supporting the project that are quoted as truism by the minister in his reply was published in September by the leading international scholar of the old Vilnius Jewish cemetery’s history.

Second is the promise of “discussing the renovation with the Israeli government,” this coming after the Lithuanian prime minister boasted during his visit to Israel in September that his Israeli counterpart, Benjamin Netanyahu, was supportive of what is becoming known as the “convention center in the old Jewish cemetery.” It is most extraordinary that a potential vast violation of human rights in the European Union should be “kosherable” by Israeli’s PM, the more so when Israel’s own painful issues with Lithuania are complex and vast.

Finally, the reply is remarkable for what is missing. There is (perhaps for the first time in governmental defenses of the indefensible in this saga) no mention of the approval for the convention center given by the London-based “Committee for the Preservation of Jewish Cemeteries in Europe” (CPJCE), who were caught red-handed in a Wikileaks document demanding a large sum in 2009 for “supervision” of minor works at the same Vilnius cemetery (see reports in the Jerusalem Post and JTA). Perhaps at last, European officials are coming to realize what an embarrassment the London “grave-trading rabbis” can be. They are affiliated with a renegade branch of Satmar hasidism (see color coded list of links), and have been roundly overruled not only by virtually all the major Lithuanian origin rabbinic leaders internationally, but by the main Satmar rabbinic court in New York as well. 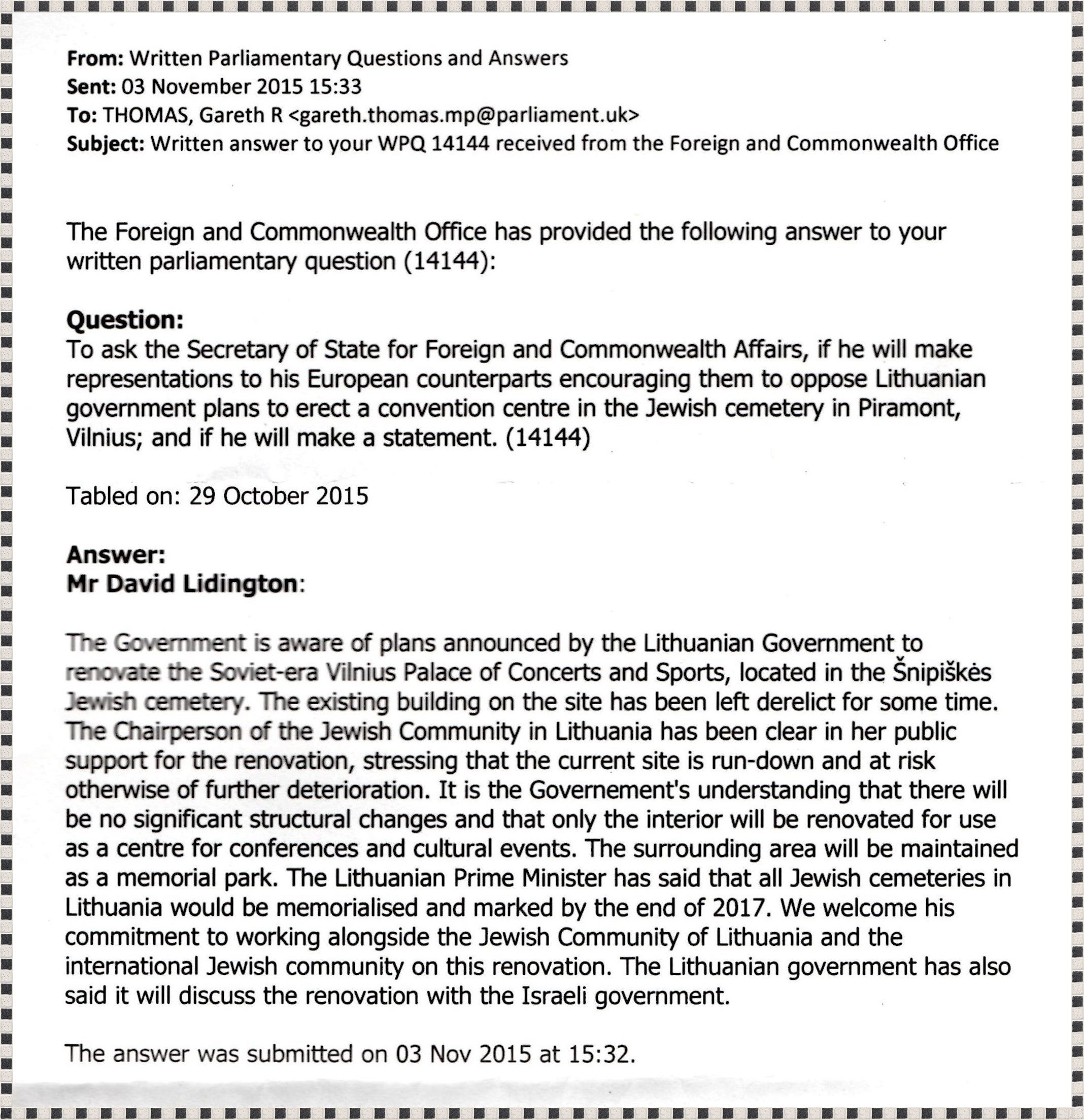