The following exchange between human rights advocate MP Denis MacShane and the government’s Minister for Europe, David Lidington, was reported today in the House of Commons:

Denis MacShane is the author of Globalising Hatred.  The New Antisemitism, that was published in London in 2008 byWeidenfeld & Nicolson, to international acclaim. The book makes an explicit reference to the extreme reached in Lithuania when prosecutors began to ‘investigate’ Holocaust survivors who joined the anti-Nazi resistance (see extract here, under: 24 Sept 2008; also: here).

This journal believes that the recent letter, on matters of concern to the public, containing no confidential information, and proudly signed by the ambassadors of seven nations, should be made public without further delay. Its essence was in any case leaked to and extracts published by BNS. 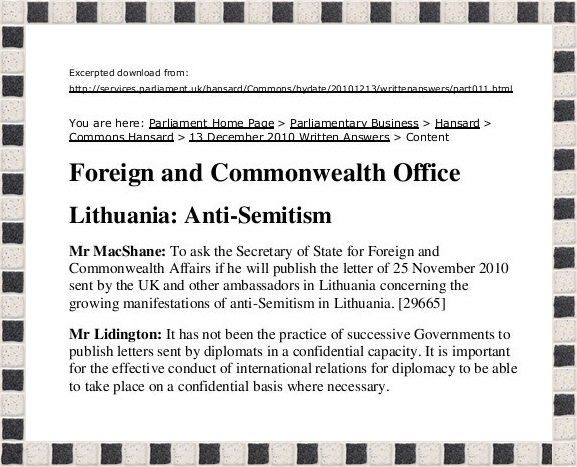