Only in Eastern Europe: Convicted Nazi War Criminal, 96, is the Plaintiff

Posted on 16 December 2010 by Defending History

Judge Viktor Vadasz dismissed the case against the Simon Wiesenthal Center’s Israel Office director, Dr Efraim Zuroff, some ten minutes after its 8:30 AM start at the District Court of Pest at 25 Marko utca.  Defending History.com was in court (with ATV and Hetek).

The Faith Church of Hungary, led by Pastor Sándor Németh, a major figure in the battle against antisemitism and Holocaust revisionism in the region, supported Dr Zuroff steadfastly throughout the saga. The hearing was also attended by representatives of the Novi Sad Municipal Assembly along with the former president of the Novi Sad Jewish community, Dr Ana Frenkel, who represented the community at the hearing. Novi Sad, Serbia, is the site of the murder of many of the victims of the alleged Nazi war criminal who brought this case.

The plaintiff in the ‘libel case’, twice-convicted Nazi war criminal Sándor Kepiro, failed to appear. His Lawyer, Zsolt Zetenyi, cited health reasons and maintained that his client had fulfilled his obligation as plaintiff by having appeared at the case’s initial hearing last October. Upon the judge’s dismissal of the case on Thursday morning, Kepiro’s lawyer pledged to lodge an appeal for the case to be reopened. 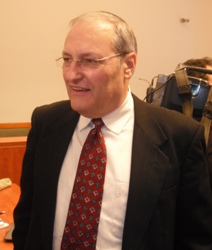 Emerging from the courtroom, Dr Zuroff told DefendingHistory.com: “This absurdity was a diversion. The forces in power need to show they are serious about pursuing justice for the victims of the Holocaust by ensuring that the alleged war criminal comes to trial at the earliest possible date. That is what this is about.”

Sandor Kepiro, 96, twice convicted in the 1940s for Holocaust war crimes, and a former Nazi  runaway in Argentina, where he lived for 48 years, had been trying to sue for libel Holocaust historian Dr Efraim Zuroff, who exposed Kepiro in Budapest and has called for him to have a fair trial in his own country. While allowing the widely ridiculed libel action, likened to a ‘neo-Kafka circus of an upside-down world’, authorities have delayed their decision on whether to bring Kepiro to trial.

This entry was posted in Events, Hungary, News & Views, Politics of Memory. Bookmark the permalink.
↑ Return to Top