Posted on 11 October 2010 by Defending History 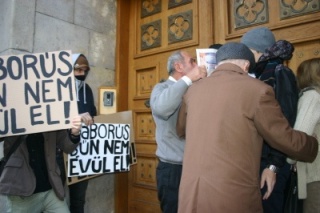 Some would say it could only happen in Eastern Europe. A ninety-six year old convicted war criminal is the plaintiff in a case concerning his Holocaust era crimes. The unlikely libel suit filed by a Hungarian Nazi collaborator, Sandor Kepiro, 96, against the Simon Wiesenthal Center’s Dr Efraim Zuroff, opened in Budapest on Friday, 8 October 2010, to a packed courtroom.

Kepiro last year admitted on BBC Television that he had rounded up residents but denied he knew they would be killed. He was convicted of involvement in the infamous 1942 Novi Sad massacre of Jews, Roma and Serbs, first by a  1944 Budapest tribunal, then again in 1946. This second conviction was in absentia; Kepiro had fled to Austria where he lived from 1945 to 1948, when he made his way to Argentina, where he lived until 1996.

Hungary’s pro-Jewish Christian evangelical Faith Church came out in force to support Dr Zuroff, who earlier this year was honored by the president of Croatia.

The irony of the situation was that his seemingly preposterous legal action for the first time ever enabled Dr Zuroff to directly question a suspected Holocaust perpetrator in a court of law. It also highlighted what seemed to many an absurd black comedy: a legal system that isn’t prosecuting a Nazi war criminal allows him to sue for libel. The proceedings were adjourned until 16 December.

This entry was posted in Hungary, News & Views, Politics of Memory. Bookmark the permalink.
↑ Return to Top