Will the Neo-Nazis Again be Given Central Kaunas on Feb. 16th Independence Day to Glorify Holocaust Collaborators, Spread Hate, and Damage Lithuania’s Standing?

IS THE 98TH ANNIVERSARY OF LITHUANIA’S 1918 DECLARATION OF INDEPENDENCE

A DAY OF CELEBRATION FOR ALL THE PEOPLE OF EUROPE

The Question: Will the government and the Kaunas authorities again allow the neo-Nazis to shamefully hijack the interwar capital (and current 2nd city) for a parade that glorifies Holocaust collaborators and xenophobia and flaunts swastikas and other fascist symbols?

We shall again be there (midday in Ramybės parkas) to silently remember the 30,000 Jewish citizens of Kaunas massacred with the collaboration of the Nazi puppet prime minister whose portrait on a huge banner has been worshipped at each march in recent years.

They were also citizens of Lithuania who celebrated February 16th: 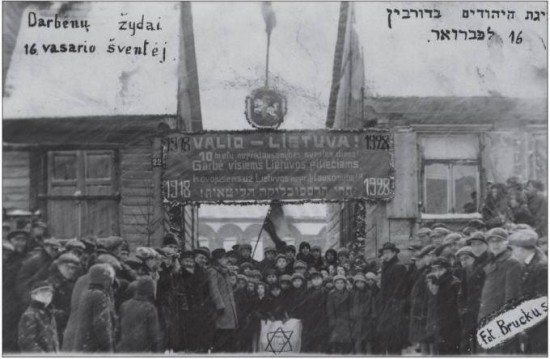