Mayor Erin E. Stewart of New Britain Connecticut announces on her Facebook page for 30 June 2017 (as PDF) that she had on 29 June 2017 welcomed Viktoras Pranckietis, speaker of the Lithuanian Parliament, and Julius Pranevicius, Consul General of Lithuania in New York, to “discuss” a new monument to honor Adolfas Ramanauskas-Vanagas [the text mistakenly provides Vytautas as his first name]. While the text of the post speaks only of discussing, the attached photo-op depicts celebrating officials posing for the cameras with a hammer and shovel (as PDF), image of the monument on the table (as PDF), and an apparent medal to the mayor (as PDF), all of which seemed to indicate something substantially more concrete than a  first exploratory discussion. It would have been expected that the proposal would have first gone to the democratically elected Common Council for evaluation. In fact, members of the council did not become aware of the project until many months later, in fact some time after DefendingHistory.com rang the alarm bells in January 2018. Various people who inquired in early 2018 were told “There is no such project.” It was then thanks to one member, Alderman Professor Aram Ayalon, that the monument proposal became the subject of open debate in the weeks and months that followed, as detailed in this timeline.

It seems, moreover, that the Lithuanian officials who visited the mayor in June 2017 made no mention of Mr. Ramanauskas’s controversial status as a leader of a Hitlerist militia during the early days of the Lithuanian Holocaust in 1941, an issue which Lithuanian ethicist Evaldas Balciunas had brought to the public square in a 2014 article, that appeared also in English translation. See now also Mr. Balciunas’s Dec. 2017 follow-up.

Simon Wiesenthal Center (SWC) headquarters in Los Angeles posts on the central SWC website its statement urging the Lithuanian government not to proceed with plans for naming 2018 to honor Adolfas Ramanauskas who led a pro-Nazi militia in the early days of the Lithuanian Holocaust.

Internet slide show posted with details of the proposed Ramanauskas monument slated for public land erection in New Britain, Connecticut in 2018. The post makes reference to the Lithuanian Parliament’s decision to do so, and of the far-right Genocide Center’s central role, but with no discussion of which American democratic institutions in the Connecticut city have agreed to the project, and to what form of public and City Council discussion it might be referred. The slide show (correctly) refers to New Britain as a “multicultural city” but (shamefully) omits the years 1941 in Ramanauskas’s biography. The message is that voluntary leadership of a pro-Hitler LAF group in the weeks when that group committed multiple murders, is not worthy of mention.

Lithuanian ethicist Evaldas Balciunas, writing in Defending History, protests the parliament’s decision to “name 2018” for Adolfas Ramanauskas. He notes that Ramanauskas in his memoirs boasted of having led one of the pro-Nazi “partisan groups” in June 1941, refers to the contemporary Lithuanian police reports of what that unit did, and notes that the memoir was published under the auspices of Ramanauskas’s supporters and family in free and democratic Lithuania after the end of the Soviet period of repression.

The New Yorker reports, in effect, that Lithuania has a freedom-of-speech problem when it comes to criticisms of Mr. Ramanauskas. A Lithuanian author had her books banned by the publisher (allegedly under state influence) after criticizing Ramanauskas’s postwar record, which is an issue separate from his alleged 1941 Holocaust collaboration.

Diena.lt reports (in Lithuanian) that “the New Britain government has supported the efforts of the Center for the Study of Genocide and Resistance of the Lithuanian People to commemorate the memory of Adolfas Ramanauskas-Vanagas at his birthplace.” The article also boasts that the New Britain park where the Ramanauskas monument will stand was designed by the same urban architect who designed New York Cit’s Central Park. Finally, it claims that  “the mayor of the city promises to build a billboard and benches” to highlight the Ramanauskas monument. Full English translation here (PDF).

The Baltic Course reports that “New Britain’s authorities gave a green light to the LGGRC efforts of keeping Vanagas’ memory alive in his place of birth.” LGGRC are the initials for the far-right Holocaust revisionist research institution known as the Genocide Research Center in Vilnius (see Defending History’s section for news over the years). For many years, one of its “chief specialist” was a known neo-Nazi. Nowadays it specializes in trying to defend the “ethnic cleansing” programs of some World War II “heroes”. One of its major critics is the bold Lithuanian-American scholar who returned to his homeland, Dr. Andrius Kulikauskas. A similar report, emanating from the same BNS (Baltic News Service) press release, appeared in The Lithuanian Tribune (as PDF).

As a symbolic gesture of support for Lithuania’s genuine heroes, and in protest against the Lithuanian parliament’s decision to honor Adolfas Ramanauskas, the Defending History community in Lithuania decided to honor as Person of 2018 Malvina Šokelytė Valeikienė, a heroine of Lithuania’s war of independence in 1918 (whose centenary is being commemorated in 2018), who went on, when the Holocaust came, to do the right thing and risk her life and family to save a Jewish neighbor.

Defending History reports on plans for a monument to Adolfas Ramanauskas in New Britain, Connecticut, and appeals to the town’s leaders to reconsider.

In Vilnius, Lithuania, an annual neo-Nazi march permitted for the capital’s city center on the nation’s independence day, was again fronted by a banner of the group’s “heroes” starting with (at left of banner) Mr. Ramanauskas, and including another five alleged Holocaust collaborators, four of them proven collaborators. The adoption of Ramanauskas as one of the neo-Nazis’s prime symbols, in the opinion of some, has raised the issue of whether erecting new monuments to him in the United States is the correct and constructive symbol for our times?

Neo-Nazis’ torchlit parade through the Old Town of Vilnius, capital of Lithuania, on 16 February 2018 features a lead banner with six “national heroes,” of whom five are alleged Nazi collaborators. The first from left is Adolfas Ramanauskas, a major symbol to the racist ultranationalist and neo-Nazi far right in the country. Some marchers sported swastikas and other fascist symbols. At its conclusion, a guest speaker from Estonia called for “one thousand years of ethnic purity in the Baltics”…

New Britain Progressive reports on halting of the Ramanauskas project.

Article by Dovid Katz in Tablet magazine on the Genocide Museum makes reference to the New Britain Ramanauskas saga in the context of the Lithuanian Foreign Ministry’s attempts to export Double Genocide Holocaust revisionism.

Lithuania’s leading neo-Nazi blogger, “Zeppelinus” (who is widely reported to be the alter ego of a high official in the nation’s Economy Ministry, and whose “sickening photoshops” target Blacks, Gays, Jews, Women, Russians, Poles and other minorities) issues his statement and “artwork” on the New Britain, Connecticut Ramanauskas issue, including photoshops of Professor Aram Ayalon, Dr. Efraim Zuroff and Professor Dovid Katz, being manipulated by an image of Putin himself being advised by an Orthodox rabbi. Photo montage of his “works”. . . 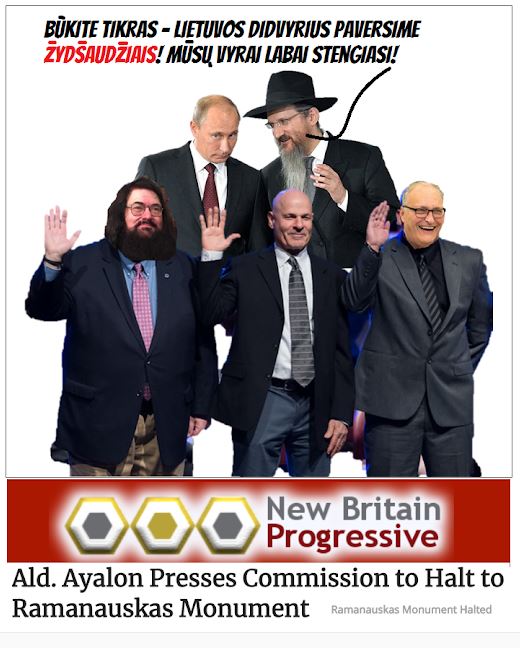 New Britain, Connecticut Alderman Professor Aram Ayalon, and the city’s New Britain Progressive, feature in the latest production by Lithuania’s leading neo-Nazi blogger whose hate material regularly targets Blacks, Jews, Gays, Women, among others. According to media reports, he is in real life a leading official at the country’s Economy Ministry, which has taken no steps to investigate since the reports surfaced in 2013.

The New Britain Progressive publishes a summary and timeline, noting that the project’s formal and permanent dismissal is on the agenda for a City Council meeting of 9 May.

The City Council (Common Council) of New Britain, Connecticut passes the text of the resolution proposed by Alderman Prof. Aram Ayalon by a vote of  9 to 5. The opponents of the resolution were not in favor of the monument. They, the Republican minority, supported the mayor’s position that the monument was in fact never agreed to by the mayor’s office or town council, obviating the need for any resolution that would rescind a decision reached.

Please support defending history! If not you, then who?